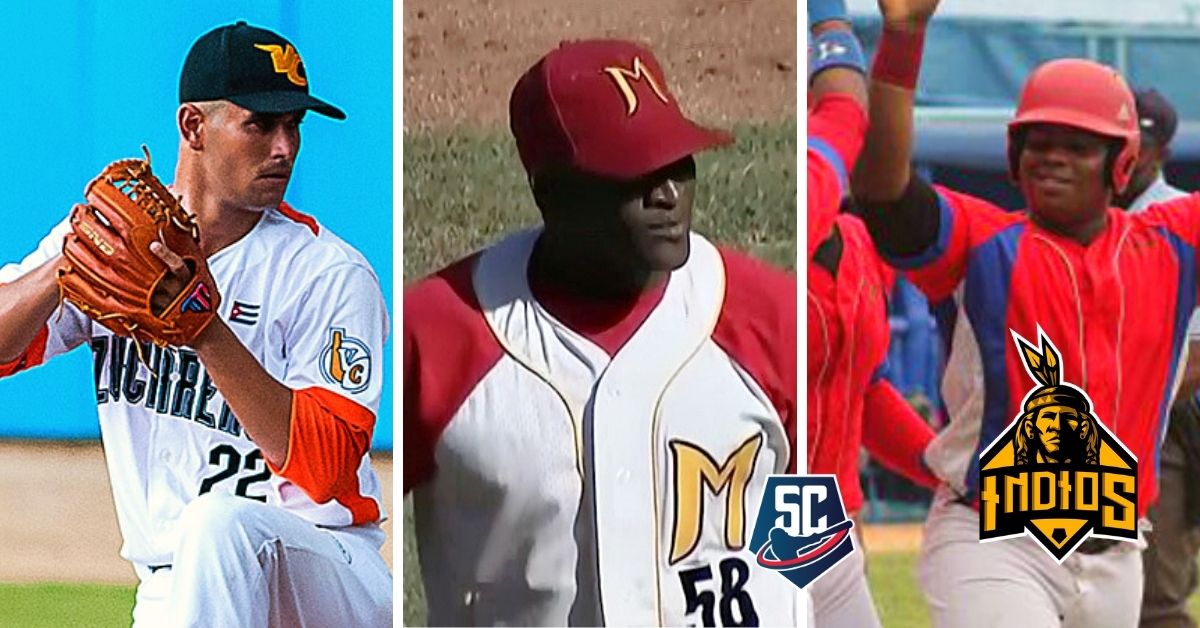 On the afternoon of this Sunday, February 27, the tenth particular commitments of Series 61 concluded, in a day in which the Villa Clara Sugar Producers completed the sweep of their arch-rivals Avispas de Santiago de Cuba; the Matanzas Crocodiles consolidated at the top of the Standings after striking back at the Holguín Cubs; the Gallos de Sancti Spíritus knocked out the Piratas de La Isla to level the match, while the Elefantes de Cienfuegos could not hold on to a four-run lead in the ninth to lose to the Indios del Guaso.

It may interest you: «In the ball YES, but the artists NO», popular reggaeton player Yomil CRITICIZED «privileges» of Cuban baseball

The Azucareros de Villa Clara (14-10) extended their streak of consecutive games without losing to seven after sweeping the Avispas de Santiago de Cuba (15-10) at their Augusto César Sandino stadium in Santa Clara, after the sunday hit with 9×1 blackboardtaking home the sub-series by three wins to two.

A very productive offense and the excellent work of the starter and winner of the match, Elier Carrillo (4-1) during six complete innings with only three hits allowed, three strikeouts and two walks, combined perfectly to leave the indomitable without options. , a team that little by little has been “deflating” and with great difficulty still remains in the outposts.

It may interest you: “I am a handsome pitcher and I believe it”, confessed talented Cuban baseball pitcher

The talented right-hander of the oranges silenced the offensive batch of Eriberto Rosales’ troops, totally unproductive in their tour of Sancti Spíritus and Villa Clara, adding just one win in the last five games held, mainly due to their low offensive average, constant glove-in-hand errors and a pitching that, although it continues to be one of the best in the series, is not hermetic and allows just enough to be defeated.

The opposite side of the coin is Villa Clara, a team that has come from less to more and is already playing over .500 in terms of the balance of wins and losses, combining experience and youth in its regular line up, acceptable defense and pitching who is capable of winning games, one after another, until he sneaks among the leaders of the tournament.

In this afternoon’s clash, the oranges made a couple of runs at the end of the second inning, combining a couple of singles with the same number of walks granted by the Avispas starter, left-hander Ediasbel Valentín (2-1, 4.0 EL, 7 H, 5 C, 4 CL, 2 K, 4 BB), ultimately the loser of the match.

Two episodes later, a home run by Yuri Fernández (4-2, HR, 3 CI, CA) with a runner in circulation, his first in the National Series, made the game 4×0, while two other runs at the end of the fifth driven by a double by Yurién Vizcaíno (4-2, double, 2 CI, CA) and a texas by Julio Miranda (4-2, CI, 2 CA), they extended the lead to six runs.

At the end of the sixth, the oranges scored the seventh driven by Juan Carlos López and added two more in the eighth by walking Vizcaíno with the bases loaded and Leandro Turiño’s sacrifice fly. At the beginning of that same episode, the Wasps broke the grout by grounding out the Ariel Benavides box that brought the speedy José Luis Gutiérrez from the antechamber

This match saw the official retirement of veteran Normando Hernández as narrator-commentator for the Villa Clara Sugar Producers for the CMHW radio station in the center of the country.

Matanzas hit back at Holguín and widened the lead at the top, huge Yera in the box

The Matanzas Crocodiles (17-7) took advantage of setbacks in Mayabeque and Santiago to extend their lead at the top of Series 61, then to defeat 9×2 to the Holguín Cubs (8-17), overcoming the setback suffered on Saturday afternoon and winning the particular match against the Orientals 4-1. A total of 11 hits were connected by the Matanzas for 12 by the Orientals, with one error per side.

The Crocodiles decided the game early with a pair of three-run clusters scored in the first and second innings, including a home run by Ariel Sánchez (5-2, HR, 3 CI, 2 CA) with two teammates on base. Holguín discounted two in the upper part of the fourth due to homers by Yasiel González, but in reality the victory of the Crocodiles was never in danger, who scored three more dribbles, by a home run by Yadir Drake (3-2, HR, 2 IC, CA) in the fifth, Javier Camero’s (3-1, 2 RBI) rocket in the sixth and walk to Andrys Pérez with bases loaded in the eighth.

From the offensive point of view, Jefferson Delgado (4-2, double, 2 AC) also stood out for the locals, while for the Cubs, the best were Michel Gorguet (3-2) and Maikel Cáceres (4-2, double).

International left-hander Yoanni Yera (2-1) took the victory with a superb performance of seven complete innings, in which he allowed only two earned and nine hits, struck out five and gave away two walks. Haykel Parra made good relief of two scoreless innings, three hits and one strikeout, while the Holguín starter, José Antonio Sánchez (1-3), suffered the setback in a short-lived 0.1 inning outing, enduring three earned runs, two hits and giving out a couple of free passports.

At the Cristóbal Labra stadium on the Isla de la Juventud, visiting Gallos de Sancti Spíritus (13-11) won by KO in seven innings of 10×0 to the Pirates (12-13) and incidentally win the sub-series three successes to two, with good work from their starter Ariel Zerquera (3-0), who worked completely at the rate of three strikeouts and four walks, with two hits allowed , adding his third success of the campaign without setbacks.

It may interest you: Gurriel SPOKE about scouts from the Cuba team: «They called me from there, you finished!»

The Roosters came out ahead on the board with a couple of runs scored at the beginning of the third inning and then defined the game with a wide group of eight in the fifth, to put him out of action very early in the fray, adding a total of 14 hits No mistakes on defense. The Pirates could do little with the wood and, in addition, they made a blunder in a game where no homers were hit and Alberto Hechevarría (2-2, 4.1 EL, 8 H, 6 CL, 2 K, 3 BB) charged with the setback .

The most prominent offensive players for the visitors were veteran starter and third-string player Yunier Mendoza (4-2, 3 CI), forward Rodoleisi Moreno (5-3, 2 CA) and waiter Yoandy Baguet (3-3, double CA), while right fielder Alberto Rodríguez (5-1) and substitute Alexis Miguel Varona (2-1) drove in two runs per capita with a double and added one lap each.

In the Pearl of the South on September 5, the Elefantes de Cienfuegos (8-17) sank further into the basement of the Standings after losing a four-run lead in the ninth inning against the Indios de Guantánamo ( 9-16), when it seemed that victory was a matter of time.

The final score was 12×9 in favor of the Orientals, who connected 16 hits to 15 Cienfuegos and made a couple of errors, a victory with which they leveled the weekend sub-series and won 3-2 in the particular match.

At the end of the sixth episode, with the game tied at four runs, the Elephants scored a five-run series with the same number of hits and two walks by Guantanamo starter Enyer Fernández (5.2 EL, 9 H, 7 C, 6 CL, 1 K , 5 BB), including a home run by Yusniel Ibáñez (5-3, double, HR, 4 IC, CA) with a pair of teammates on base.

With that 9×5 advantage, the game reached the ninth episode and when it seemed that the Elephants had the victory, the Indians rebelled when picking up the bats and equalized the match, with a strong attack of four hits and taking advantage of the two tickets given away for the relief pitching of the Cienfuegos. Robert Luis Delgado, Yoandri Guibert (5-3, 2 doubles, 2 CI, CA) and Leovarlis Brooks were in charge of driving the scoring of the tie and taking the game to Schiller Rule.

It may interest you: “Mattress, microwave and house, BUT …” Industriales player CONFESSED about STIMULOS in National Series

In the top of the tenth, the Guantanamo team returned to the charge and scored a three-run rally to take the victory, counting on a decisive home run by Pedro Pablo Revilla (5-2, 2 H, 4 CI, 3 CA), his second of the meeting. The Elephants didn’t score in the bottom of that inning and went home crestfallen.

It may interest you: “The ball games fuck you” CONFESSED Cuban major leagues about former teammate

In other results of the day, the Tigres de Ciego de Ávila (15-10) equaled with Santiago in the third position of the Table, after completing the sweep against the Leones de Industriales (12-12) with a close victory of 8 × 7; the Vegueros de Pinar del Río (12-13) also passed the broom over the Leñadores de Las Tunas (11-14) and whitewashed them 7×0; the Alazanes de Granma (12-13) retaliated 7×5 against the Hurricanes of Mayabeque (15-9), while in a hot game and with several expulsions, the Cazadores de Artemisa (13-11) came from below and defeated the Toros de Camagüey (11-13) 14×8 to pass the broom to them.