We all know Astros star José Altuve didn’t cheat, and now a writer from New York confirms it.

José Altuve remains a star in all of baseball despite all the evidence that he is not, in fact, a cheater. As if we need more, we have none other than a New York journalist also confirming that the Houston Astros star is not at all deserving of the hate he’s receiving.

Andy Martino, who covers the Yankees and Mets for SNY, has published a book titled “Cheated: The Inside Story of the Astros Scandal and a Colorful History of Signal Theft.” The text is for sale, but the writer himself has confirmed some things on social networks.

Several Astros players have publicly said that Altuve did not participate in the signal stealing scheme and that he did not want signals transmitted to him during his hits. This has been further confirmed, with Martino explaining that “MLB investigators had developed an understanding that he was not interested in having the signals” before it was publicly reported.

There are a very limited number of cases where a dumpster hit was heard during one of Altuve’s at-bats, and Martino addresses that as well. He said that “when Altuve heard a blow, he would look towards the bench,” letting his teammates know that they should cut it. This is consistent with what we have heard before, but now we have a journalist from New York confirming it.

So we know that Altuve was not involved in the sign stealing scheme, but what about the doorbell theory? As we’ve said on this site many times, that outlandish theory has been debunked, as there’s not a shred of evidence that Altuve was wearing a buzzer under his uniform to signal which pitch was coming when he hit a home run off Aroldis Chapman to end the ALCS. 2019.

Proponents of the buzzer theory point to the fact that Altuve did not want his teammates to rip off his jersey after the home run. But logic would dictate that, if such a scheme was being used, his teammates would have known about it. Why would they want to rip off his shirt if they knew it had a buzzer? 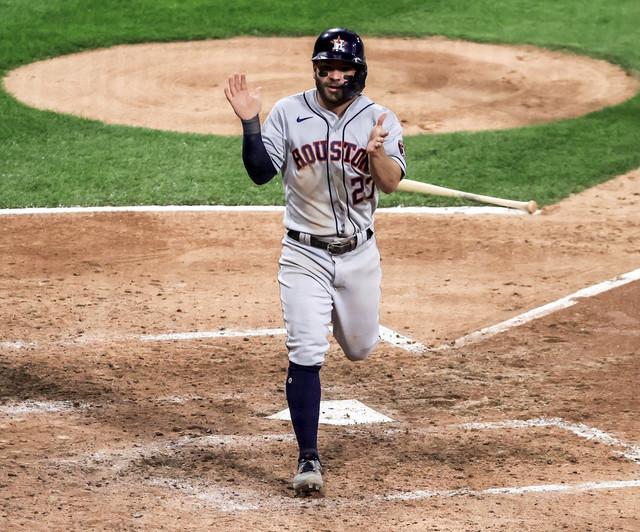 Others will claim that there is no way Altuve could have hit that pitch unless he knew what was coming. The problem with that is that Chapman couldn’t control his fastball in that appearance and the Astros knew it. Any batter worth his salt would have sat on the slider, and it helped that Chapman threw a pitch right over the heart of the plate.

Besides, what was Altuve to do? He was a 27-year-old who is relatively quiet to begin with. Do you think he’s going to dominate veteran Carlos Beltrán and his bench coach Alex Cora in that locker room? If respected veteran Brian McCann tried to stop him and failed, and if AJ Hinch couldn’t stop him, what makes anyone think that Altuve was going to end the scheme without help?

Altuve is the face of the scandal for two main reasons: He won the 2017 AL MVP award over Aaron Judge, and he hit that home run off Chapman. If Judge had won the MVP and the Astros had lost to the Yankees in both 2017 and 2019, it’s unlikely anyone would care about the signal stealing scheme anyway. But Altuve is the daddy of the Yankees, and that’s why they hate him.

They keep calling him a cheater for the simple fact that they want to believe he is a cheater. You can put all the trials in the world in front of these people and they won’t care. They will even explicitly say that they don’t care. Now there is even a journalist from New York, who has no bias in favor of the Astros, saying that Altuve is not a cheater, and the haters still won’t care.

Yes, the Astros broke the rules. Nobody denies it. But it is totally unfair that Altuve is the face of a scandal in which he clearly did not participate. He earned his way to the big leagues, was a great hitter before stealing signals, and is still a great hitter today. No matter what the idiots in town say, he is a role model as there is in this sport.