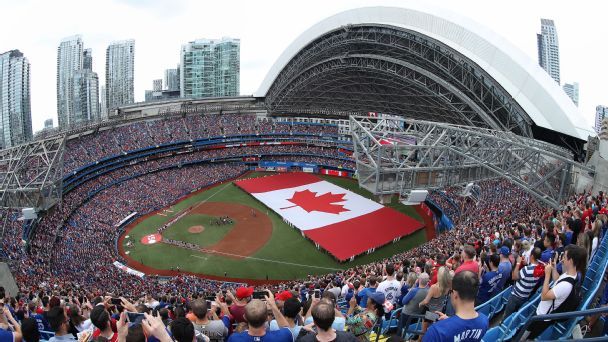 The rosters of Major League Baseball teams with unvaccinated players may look slightly different when they travel to Toronto during the 2022 season. Due to policies established by the Canadian federal government, players who have not received the vaccine against the COVID-19 will not be able to enter the country to play games against the Blue Jays at the Rogers Center.

The Texas Rangers became the first team to face the restrictions created by the mandatory vaccination order. Today begins his series against the Blue Jays (with transmission LIVE at 7 pm ET on Star+ only for South America)

Since the vaccination status of the rosters varies between the different teams; Below, we review how Canadian federal policies will affect Major Ball novenas when they travel to Toronto.

What exactly is the policy for unvaccinated players and what does it mean for teams visiting the Blue Jays?

The Canadian government does not allow unvaccinated travelers to cross its borders, except in special circumstances such as family funerals. As a result, any unvaccinated Major League Baseball player will not be allowed to travel to Canada and will not be paid for those games (more on that later). If players decide to get vaccinated to play games in Canada, they must receive a dose of Johnson & Johnson serum or their second dose of Pfizer or Moderna at least 14 days before entering the country.

Is that policy expected to remain in place throughout the season?

At the moment, there is no indication of changes in the policy, according to sources. Contrary to the exception created by the mayor of New York for unvaccinated artists and athletes to perform in the city, there is currently “zero interest” in creating a similar exception in Canada, according to sources linked to the organization. of the Blue Jays. Obviously, there is a gap of several months between Opening Day and the end of the regular season; And as New York showed last month, things can change quickly. However, to this day we cannot expect the policy to change any time soon.

Which key players did not travel to Toronto for opening weekend?

The Rangers will have no absent players in Toronto during their first series. The team arrived in Canada this week with its roster fully intact.

As the season progresses, will we know ahead of time which players won’t be traveling to Canada, or will it be a surprise?

There is no requirement for teams to post their traveler rosters in advance; So as long as the policy exists, this will be a burning question for players heading to Toronto. Some players who played in the previous tournament without getting vaccinated (such as Boston Red Sox shortstop Xander Bogaerts) have since announced that they applied the biological. Other players, such as the New York Yankees outfielder Aaron Judge, have avoided answering direct questions about their vaccination status. Unless teams decide to announce in advance which players won’t be traveling to Toronto, we can anticipate an element of speculation leading up to each series.

What will players who don’t travel to Toronto do while their teams play in Canada?

They will not be paid for playing baseball. Unvaccinated players will not be allowed into Canada; therefore, they will not be able to remain in Toronto while their teams play games at the Rogers Centre. Players who can’t play in Toronto will be placed on the restricted list, used most often by players with personal or legal problems, and will not receive salary or accrue service time.

“It’s a concern,” said Tony Clark, head of the Major League Baseball Players Association (MLBPA), regarding the attempted loss of wages and length of service. “As everyone knows, we appreciate and respect the decisions made, especially regarding the health of the players and the health of the community. However, this is an issue that is part of the pandemic we are dealing with nationally. ; so we’ll just have to keep trying to work with her from here on out.”

How will players who don’t travel to Toronto be replaced on the roster?

According to a source linked to the league, teams that must replace players on the restricted list will be able to include a substitute in their active rosters during the series played in Canada.

Are there equivalent cases in other teams/cities in Major League Baseball or other sports?

Who is the number one MLB player for the 2021 season? Our experts ranked the top 100 players as the season kicks off on the diamond.

Subscribe to ESPN+ for live action and the best coverage of the 2021 Major League Baseball season.

The NBA’s Toronto Raptors could serve as a foretaste of the advantages the Blue Jays could have when they play in their backyard. Brooklyn Nets guard Kyrie Irving and other unvaccinated players could not play in Toronto during the playoffs, scheduled to start on April 16; while other teams like the Boston Celtics and Philadelphia 76ers have refused to reveal whether their entire rosters are vaccinated with full cycles. For their part, the Miami Heat and the Milwaukee Bucks have confirmed that all of their players have received the COVID-19 vaccine.

Which teams will travel to Toronto after Texas?

The Blue Jays kick off their season this weekend with a three-game series against the Rangers. Then they will go on tour to play four games in New York against the Yankees, direct rivals in the East Division of the American League.

The Oakland Athletics are the next team scheduled to visit Toronto for three games on April 15-17.

What are the policies for unvaccinated players when their teams travel to Toronto?