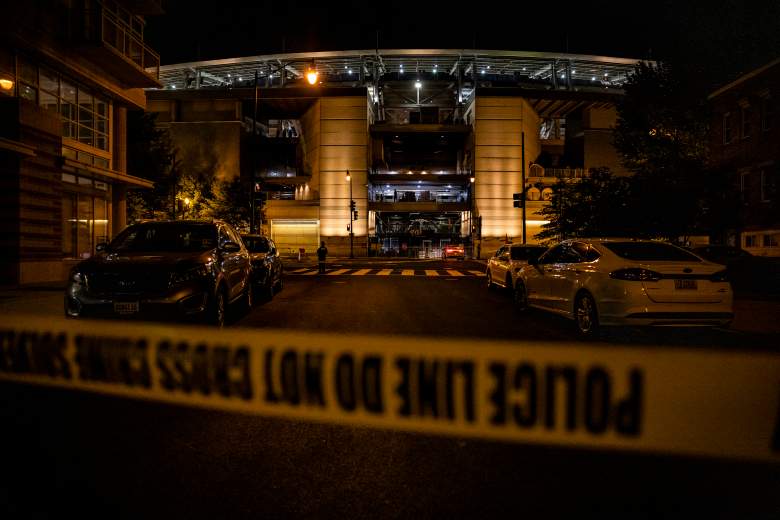 The Washington Metropolitan Police Department conducts an investigation at the scene of a shooting in front of the National Park’s Third Base Gate on July 17, 2021 in Washington, DC.

The game of Washington Nationals was suspended due to a shooting outside Nationals Park as terrified fans hid in the dugout and fled in panic after hearing the shots. You can watch videos of the scene throughout this article.

“MPD is responding to a shooting in the 1500 block of South Capitol Street, SW, in which two people were shot outside of Nationals Park. This is currently an active investigation and it appears that there is no threat at this time ”, wrote the police. The suspect, victims and motive for the shooting have not yet been established.

Later on Saturday, police wrote that two additional victims were admitted to the hospital with gunshot wounds from the incident.

The team confirmed that there was a shooting via Twitter, writing: “A shooting has been reported outside the Third Base Gate in Nationals Park. Fans are advised to exit the stadium through the CF and RF gates at this time. We are working with the authorities to provide more information as soon as it is available. “

A shooting has been reported outside of the Third Base Gate at Nationals Park.

Fans are encouraged to exit the ballpark via the CF and RF gates at this time.

We’re working with law enforcement to provide more information as soon as it becomes available.

Some videos captured the sounds of gunfire. According Associated Press, the game between the San Diego Padres and the Nationals was stopped in the sixth inning.

“Terrifying scene at Nationals Park as players run into the stands to bring family members to the clubhouse after reports of a shooting outside the stadium,” SI MLB tweeted, sharing this video.

This is what you need to know:

Twitter user Matthew RJ Brodsky wrote: “I’m not sure what happened to the F, but it sounded like gunshots in Nationals Park, the game stopped, people ducked, ran. It is not normal.” He shared the video above.

People took shelter under the seats:

Ron Filipkowski, an attorney, wrote on Twitter: “A shooting… just happened outside the door of third base at the Washington Nationals game. One person was reportedly shot and is being evacuated. ” He shared a video of people fleeing the stadium.

A shooting has just occurred outside the third base gate at the Washington Nationals game. One person was reportedly shot and the is being evacuated. pic.twitter.com/cOCw4sWcu7

One person on Twitter described it as “completely unreal chaos.”

The team wrote on Twitter: “Tonight’s game has been suspended in the bottom of the sixth inning due to an incident around Nationals Park. The suspended game will resume at 1:05 ET and will be completed as a nine-inning regulation game. After the conclusion of the suspended game, the regularly scheduled game will begin within 25-45 minutes and will be played as a nine-inning regulation game. Tickets and parking passes for the regularly scheduled game can be used to enter tomorrow’s two games. “

Getty ImagesFans leave Nationals Park after a shootout outside the Third Base Gate during the game on July 17, 2021 in Washington, DC.

Terrified fans hid in the dugout

Terrified fans took refuge on the bench. One fan wrote on Twitter: “Scary scene in Washington, DC. The players heard loud noises, apparently gunshots, and ran to grab their family members to take them to safety at the clubhouse. The Nationals announced to the fans through the public address system that the event took place outside the stadium ”.

Scary scene in Washington, DC. Players heard loud noises, apparently sounding like gunshots, and ran to grab family members to bring to safety in the clubhouse. The Nationals announced to fans via the PA system that the event occurred outside the stadium. pic.twitter.com/2UG9XWu3ir

Here’s a picture of that.

Journalist Grant Paulsen tweeted: “On the phone with my wife. On his side of the stadium (third base) he heard shots. A great panic sent fans taking off in all directions. Swat-type officers are in the park now and telling fans to stay in their seats. Now the fans are told that what is happening is happening outside the stadium. “

This is the original version of Heavy.com

READ MORE: What happened to Marni Yang responsible for the murder of Rhoni Reuter?