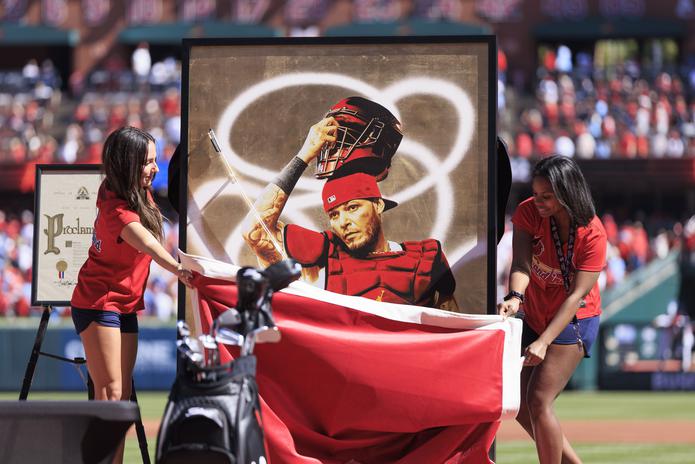 Coming Tuesday, October 4, 2022, has been declared Sunday by the San Luis city government and the Major League Baseball Cardinals organization to be Yadier Molina Day. It will precede Albert Pujols Day by one day, as announced during an emotional farewell ceremony for the Puerto Rican and Dominican baseball players today at Busch Stadium.

Molina spoke some inspiring words in Spanish to his mother, as well as in English to the Cardinals and their fans.

“I love you,” he told his mother Gladys Matta, present at the tribute. “Thank you for all the sacrifices you and my dad made with my uncles to teach me this beautiful game. Thank you for making me a man of good and faith.

Yadi gets emotional before his final regular-season game at Busch Stadium: “It was a great honor to wear this uniform for 19 years here in St. Louis, in baseball heaven, and with you — the best fans in baseball.”#STLCards pic.twitter.com/SBG6I9VpkY

Molina and Pujols were honored at Busch Stadium because today is the star receiver and legendary slugger’s final regular-season game in St. Louis. Both Molina and Pujols have announced that this 2022 season will be their last in the Major Leagues.

The Cardinals brought the organization’s top staff to the tribute, including its president, William O. DeWitt III, as well as Molina’s relatives, including his brothers and former players Bengie and José ‘Cheo’ Molina, as well as the Pujols children. Busch Stadium was filled to capacity, including groups of Puerto Ricans identified with the national colors, for the tribute prior to the Cardinals game against the Pittsburgh Pirates.

The organization showered praise on both players, especially Molina, who has played all 19 of his major league seasons for the Cardinals.

Molina was named one of the “great ambassadors” of the San Luis region and of baseball fans around the world in a proclamation presented by San Luis Mayor Tishuana Jones, present at the ceremony.

They also described Molina as “the heart and soul” of the organization, in addition to predicting that his leadership and hard play on the field will be “missed.”

In combo with Pujols, the chairman Cardinals Bill DeWitt Jr. called Molina and Pujols the type of “transcending greatness” and “key pieces” of one of the greatest eras in the franchise’s 100-year history.

Another Cardinals member who targeted Molina was right-hander Adam Wainwright, who also targeted Pujols. Wainwright is a friend of Molina and as the catcher’s teammate for more than 10 seasons they hold the record for most games started as a drummer plus wins between a pitcher and catcher in Major League history. This Sunday they raised that record to 328 games started. They’re looking for victory 214 together between those outings.

“I’m the one who will miss you the most,” the Cardinals right-hander told him with emotion.

“I think you are the best defensive receiver in history. And together with Albert Pujols you are the most bag with which I have played. And you’re definitely the smartest player I’ve ever seen in baseball,” Wainwright added.

There were gifts delivered, such as a couple of works of art to both Puerto Rican players Carlos Mercado.

Molina is in his 19th season with the Cardinals. He holds many records of the organization and the Major Leagues, as games received in the same organization.

He has won two World Series with the Cardinals and has won nine Gold Gloves and has represented St. Louis in nine All-Star Games.

Both are heralded as certain future Hall of Famers.

Waino to Molina in goodbye: “You are the most intelligent player I have seen in baseball”