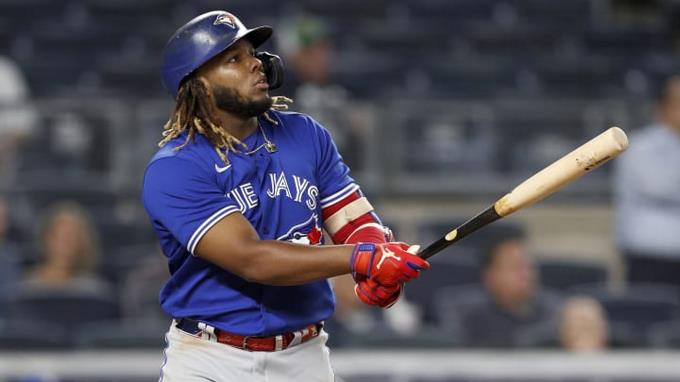 Lourdes Gurriel Jr. and Teoscar Hernández each hit grand slams, Vladimir Guerrero Jr. hit 44 home runs this season and the Toronto Blue Jays outplayed the Baltimore Orioles by beating them 22-7 on Sunday and were two runs behind. of the franchise record.

Guerrero equaled Shoei Ohtani, the pitcher and slugger, in home runs in the majors.

Gurriel set a franchise record with his fourth grand slam of the season, plus he had another two-run homer in the fifth to drive in seven total runs. Danny Jansen had four hits, including three doubles and four RBIs.

For the Orioles, Mexican Luis Urías 1-0, one scored. Venezuelan Anthony Santander 3-1, two runs scored and one RBI. The Dominican Jorge Mateo 2-1, one scored.

Wilmer Flores hit a home run and three runs, Kris Bryant scored twice against his former team and the San Francisco Giants held on to beat the Chicago Cubs 6-5 on Sunday for seven consecutive wins, their longest streak of the season. Bell.

With the best record in the majors, the Giants tied their best streak since winning seven games in August 2020.

For the Cubs, Venezuelans Rafael Ortega 4-2 with a run scored, Willson Contreras 4-0, Robinson Chirinos 2-1 with an RBI. The Dominican Sergio Alcantara 3-0 with one scored.

Isiah Kiner-Falefa had three hits and two RBIs, Taylor Hearn won his fourth straight start and the Texas Rangers took another blow to Oakland’s postseason aspirations with a 4-3 win over the Athletics on Sunday.

Yohel Pozo hit two singles and scored a run and Leody Taveras added an RBI triple for Texas. The Rangers won their second series in Oakland this season after going 0-7-2 in their last nine trips to the Coliseum.

The Athletics, who started the day two games behind the New York Yankees in the fight for the second AL wild card, have lost 17 of their last 26 games.