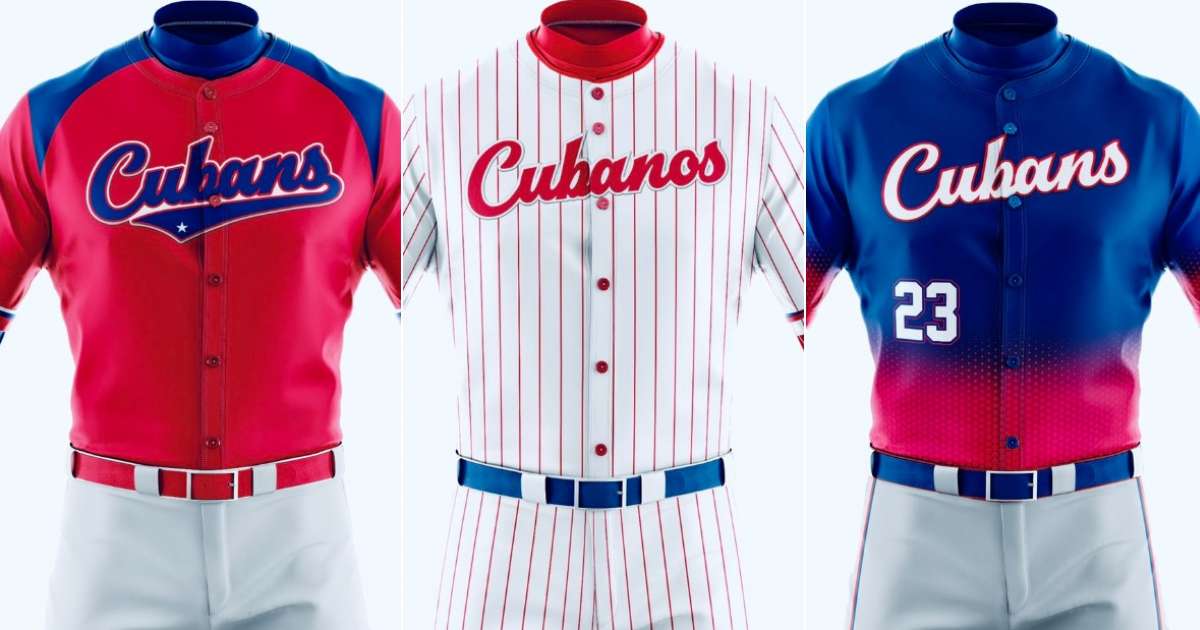 the cuban designer Charles David Rojas submitted a uniform proposal for the independent team that could represent Cuba in international competitions and that includes professional players banned from the island.

“Proud to contribute my grain of sand to this beautiful project,” Rojas wrote on his Twitter account to publicize the designs.

The proposals were first unveiled during a YouTube broadcast of the site Full Swingand the president and general coordinator of the Association of Professional Cuban Baseball Players (ACPBP), Mario Fernández, was in charge of it.

“Two of the designs are inspired by a team that existed,” Fernández advanced during the internet program.

After the broadcast, the creator of the costumes that are submitted to a popular vote, offered more details about the different designs.

“In home club It bears the name Cubanos, alluding to the name on the suit with which the Sugar Kings played in Havana. I changed the font but kept the style script. The second uniform (striped) is a modern replica with adjustments,” explained Rojas.

Cubans Sugar Kingsalso know as Havana Sugar Kings either Sugar Kingswas a Minor League Baseball team based in Havana, Cuba that played in the Triple A-level International League from 1954 to 1960.

For its part, the proposals for the visitor uniform are more similar to the model used in the Major Leagues, with a two-color shirt and gray pants.

“I’m not a baseball player, but here is my contribution to what was once a dream and little by little is becoming a reality,” Rojas concluded.

in conversation with CyberCuba, Charles David Rojas He explained that this is not the first baseball-related project he has worked on.

“In 2020 I made a proposal for uniforms for the National Series and put out my line of baseball products like hats and shirts. I started collaborating with Full Swing and in all articles marketing”, told the Cuban designer, based in Phoenix, United States.

Rojas says he also got involved in a job with Los Angeles pitcher Raisel Iglesias, where he designed custom shirts and hats.

“A few days ago, after a brief conversation with Raisel during the spring training, I sent him some ideas for the uniform, he loved them and he put me in contact with Mario Fernándezthe president of the Association,” he recalled.

After knowing the details of the project, he began to outline and adjust the proposals that resulted in some designs that enclose history, Cubanness and identity.

“We wanted it to say Cubans in the uniform for two things. The team not only represents Cuba as a territory, but to all those who are from there, wherever they are. and second we wanted to honor the rich history of our professional baseball before 1961and we chose visual codes from the triple-A team based in Havana, the Cubans Sugar Kings,” he stressed.

It is no wonder then that his favorite design, “because of the historical and semantic meaning it has”be it the one with red stripes and the gray shirt with blue sleeves, because they are very similar to the one used by the Sugar Kings at the time.

Rojas announced that he is preparing a work table in the coming days together with the designer Ismar Rodríguez, who was in charge of conceiving the Association’s logo, and who is linked to this project.

We ask if considers that the proposal of the nascent Association will be able to achieve its purposeand confidently answered yes.

“After delving deeper into the project, and knowing how the coordinators, founders and collaborators of the Association think, I have no doubt of its success. His mission and vision goes beyond a team of length for the Classicin addition to representing all Cuban professional baseball players in any part of the world, for which is inclusive“, he stressed.

The Association of Professional Cuban Players (ACPBP) is a project that aims to bring together emigrated Cuban baseball players with a view to participating in next year’s World Baseball Classic.

“Everyone who loves our baseball and Cuba wants this to happen, because we have been a laughingstock at international events for a long time. What we intend is, simply, to return the country to the stellar planes of this sport. It is a project of all Cubans, wherever they are, ”said the former pitcher from Matanzas Edilberto Oropesamember of the board of directors of the newly created Association, which has received the support of important Cuban sports figures.

It must have the approval of the MLB and the Players Union, which grant the right to intervene independently in the Classic.

However, Cuban official television broadcast a statement of Ricardo Fraccaripresident of the World Baseball Softball Confederation (WBSC) on the power of the National Federations to represent the teams that participate in the competitions that are organized by this entity.

“Nothing that comes out of the FCB (Cuban Baseball Federation) will be possible as long as they are tournaments by classification that are part of the WBSC,” declared the Italian.

His words were interpreted by some experts as a direct message to the attempts to organize an independent group of Cuban baseball players to defend the sport in international competitions.