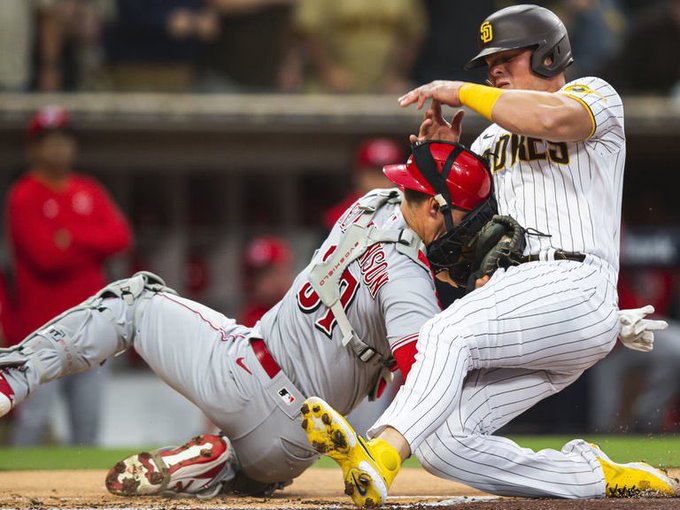 First baseman Luke Voit made a sweep across home plate that ended up giving catcher Tyler Stephenson a concussion, outfielder Tommy Pham wants nothing more than to fight.

The catcher for the Cincinnati Reds, Tyler Stephensonwas forced to leave Tuesday’s game after a nasty collision at home plate with Luke Voit of the San Diego Padres in full MLB 2022.

In the bottom of the first inning, Voit attempted to score from first base on Jurickson Profar’s double. Reds shortstop Kyle Farmer’s relief throw easily beat Voit to the plate, but the 6-foot-3, 255-pound designated hitter hit Stephenson in the face with his elbow as he tried to pass the catcher.

After the game, Tommy Pham said that he knows the owner of the Padres gym and is willing to fight Voit:

“If Luke wants to figure it out, I’m very good at it. Anything. Muay Thai, whatever. Like I said, I have an owner here who will let me use his facility. So fuck them. I’m going”. said Pham, an outfielder for the Reds at MLB.

Stephenson remained on the ground as Reds coaches checked on him and eventually walked off the field. The Reds announced after the game that Stephenson suffered a concussion. He will be placed on the seven-day concussion disabled list, according to Bobby Nightengale of the Cincinnati Enquirer.

The 25-year-old Stephenson was enjoying a strong start to his 2022 campaign, posting an .845 OPS with two home runs and six RBIs in 10 games.

Ramis Garcia, who had started as designated hitter, replaced Stephenson behind the plate. Cincinnati lost the DH job for the rest of the game and starting pitcher Reiver Sanmartin had to bat for himself in the second inning.

The Reds have been decimated by injuries this season. They entered the game Tuesday with 12 players on the injured list, including reigning NL Rookie of the Year Jonathan India.