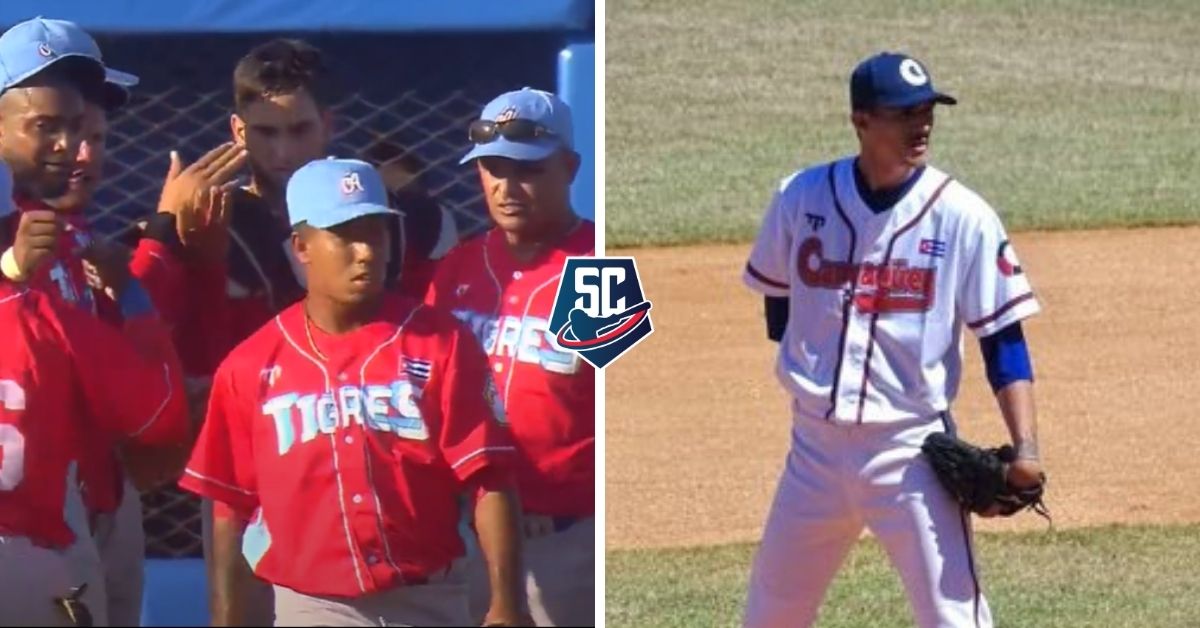 On a Saturday day of abundant offense, the Tigres continue to surprise and beat the current champions Alazanes de Granma, coming from below and with a cluster of three in the ninth; The Bulls took the Guillermón Moncada by assault and achieved a victory that is a very positive emotional blow for the people of Camagüey. Los Vegueros hit it loose and defeated the incredible Hurricanes, while Las Tunas extended their consecutive losing streak to three by losing to the Indios.

The Tigers came back and scratched the Alazanes at home

In a clash full of emotions, the Tigres de Ciego de Ávila came back from the Alazanes de Granma and with six runs in the last four innings, three of them in the ninth, they defeated them with a score of 8×5.

Key was the handling of the pitching by the management group commanded by the Olympian Yorelvis Charles, who knew how to remove and put their pieces at the right time to leave the Alazanes without runs in the last five innings. Osvaldo Cárdenas, who effectively worked the eighth inning, got the win (1-0), while closer Yosbany Ávalos earned his fifth save of the tournament.

The Avilanian offense was led by center field Liosvany Pérez, 4-3 with a trio of trailers, while Alfredo Fadraga (4th) and Rubén Valdés (2nd) took the ball out of the park. For the Alazanes, Osvaldo Abreu had a perfect afternoon, 3-3, with an RBI and a run scored, while Roel Santos also went with three hits, but five official times to home plate. The loser was reliever Kelbis Rodríguez (1-1).

With their victory, the incredible Tigres were in third place in the table with a balance of (9-6), while the current National champions were left with six successes and the same number of defeats. For the Avilanians it was the 115th victory in the National Series against the Granmenses with 139 defeats.

This time the veteran Danny Betancourt could not, who in his first two starts had not allowed runs; Camagüey’s batters, in combination with a defense that failed at key moments, made five runs, two of them dirty, in two innings and two thirds of work; decisive in the victory of Camagüey 6 × 4.

Twelve hits connected the disciples of Miguel Borroto, eight of them divided between Leonel Moas (5-4) and Yendri Téllez (5-4, two doubles and 2 IC). Juan Sebastián Contreras pitched eight and a third innings, at a rate of five hits and eight strikeouts, to take his second victory with a loss in the series, the same balance left by the loser Danny Betancourt.

Alexander Ayala hit his fourth homer of the season and Yordanis Samón his third and the 196th of his career, each time closer to double hundred. Closer Alejandro León saved his first game of the campaign.

Yoelkis Guibert went 2-for-4 for the indomitable and Osday Silva hit his first homer of the season. Highlight the excellent relief of Yosmel Garcés, who stopped the rival offense in its tracks and for 5.1 innings they barely made one, with six hits, one walk and three strikeouts.

For the Wasps it was their fourth loss with 10 smiles, while for the Bulls it was their fifth success with nine losses, hence the greater importance of this success, because they did it against the best team of the season and against the pitcher who was the Series 61 cleanup leader (0.00 in 12.2 EL); without a doubt, a positive psychological blow for Borroto’s troops. Finally, the historical pairing between both teams was 151 to 98 in favor of those from the Hero City.

With a powerful offensive, the Vegueros lowered the Hurricanes’ smoke and confirmed paternity

Eleven runs and 17 hits was the offensive expenditure of some Vegueros who did not believe in the quality of Yadián Martínez and by the time they were in the third chapter they had managed to exploit it with a great bunch of five. At the exit of it, a parade of seven relievers tried to stop the rival attack, without much success and the board reflected a definitive 11 × 7.

The backbone of the Pinar del Río batch worked like a charm, with Lázaro Emilio Blanco batting 6-2, with a pair of doubles, the same number of runs scored and three RBIs; William Saavedra, 4-3, with a tubey and a couple of RBIs and Yasser Julio González, 6-4 with a home run and five home runs, being without a doubt the most outstanding.

Erlis Casanova worked the first five innings impeccably, although he allowed three between innings six and seven. The star right-hander barely withstood four hits, struck out the same number of opponents and gave away a walk. In this way he scored his second success without defeats, while Reilandy González scored his first rescue.

At this moment, Hurricanes and Vegueros share fourth place in the table with eight successes and six defeats, consolidating themselves among the best teams at the start of the campaign. On the other hand, the Vegueros confirmed their paternity against the Mayabeque team, by defeating them for the twenty-eighth time in the National Series out of a total of 36 challenges.

As has been the trend in this first stage of the season, the relievers from Las Tunas could not maintain a five-run lead at the height of the seventh inning and with a couple of five and six-run clusters respectively, the Indios del Guaso defeated 12 runs for seven to some people from Las Tunas who are not on the path to success.

The Las Tunas offense worked very well in the first part of the match, scoring three runs in the third and sixth innings, counting on an important home run as a pop-up from the corpulent first baseman Eduardo García, who continues to show that he is ready for greater responsibilities in the Los Angeles line-up. Directed by Pablo Civil.

With a 6×1 advantage, the Indians fell on the shipments of Alberto Pablo Civil and Keniel Ferraz, managing to match the actions. Yosbel Alarcón managed to save the situation momentarily, but an inning later he was also the victim of the batting of the locals, who did not stop until they left the 58 Series champions completely out of chance.

19 runs and 27 hits was the result of the offense of the two teams with the weakest pitching this season; not for pleasure occupy positions in the second half of the table, with a balance of (6-8) in the case of Guantanamo and (5-9) in Las Tunas.

The winning pitcher was reliever Yeudis Reyes (1-0), while Yosbel Alarcón (1-2) charged with the reverse. For the Indians it was the 98th victory against the Lumberjacks in the National Series with 116 losses.

Finally, the baseball icon from Las Tunas, Danel Castro, reached 2,300 hits in his career, being the third to achieve it. He is now 56 shy of equaling the great Antonio Pacheco and 78 of Enrique Diaz, if he stays one more year, it is a fact that he will become the top producer of hits in Cuban baseball.