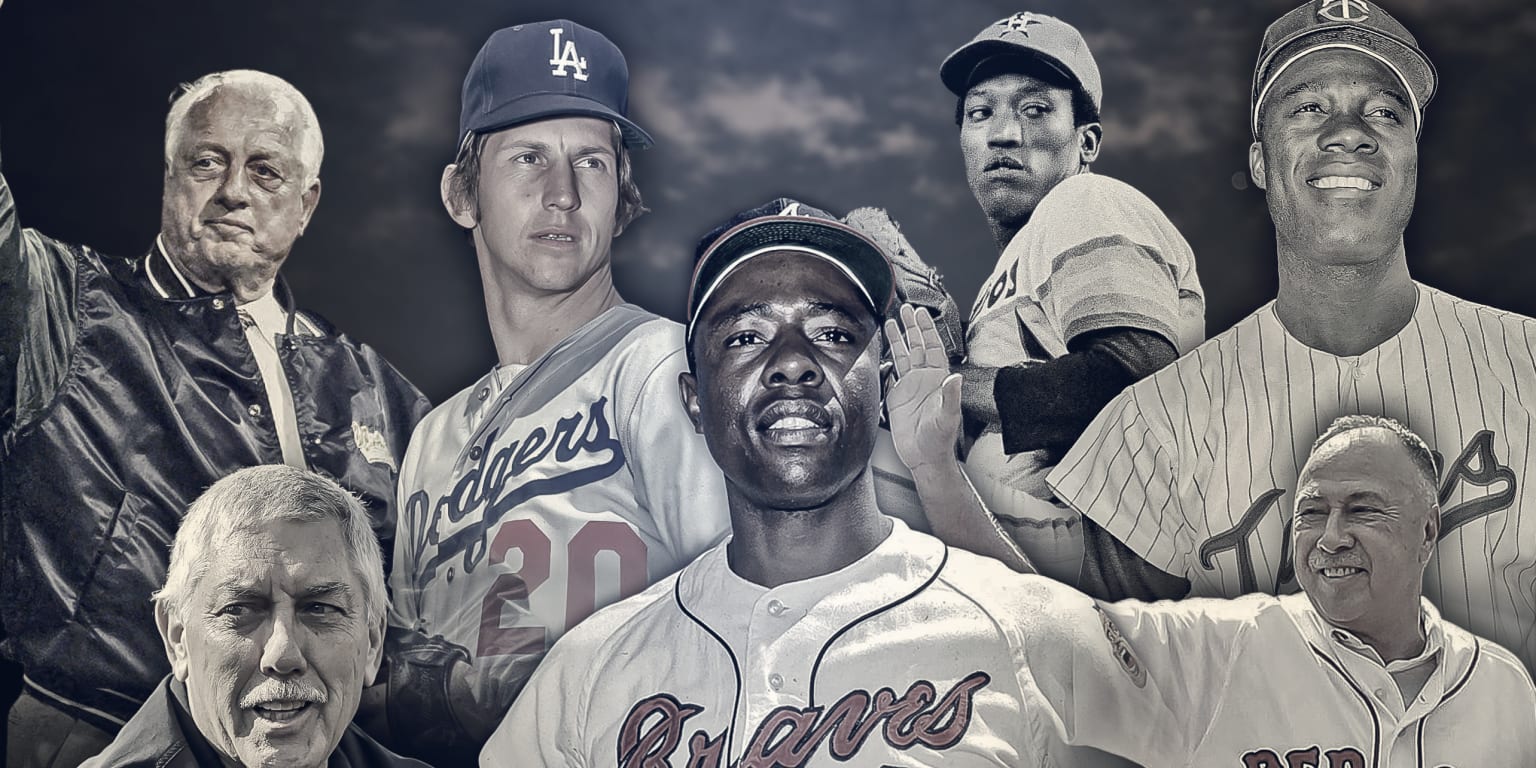 In the last hours of a difficult year, it is time to remember the baseball figures who said goodbye in 2021. The names are arranged alphabetically by last name. Baseball was affected by his absences.

Hank Aaron (1934): One of the best and most important players in the history of baseball. It is impossible to summarize his entire career and life in one paragraph. He signed with the Indianapolis Clowns in the Negro Leagues when he was 18 years old, before debuting with the Milwaukee Braves a couple of months after celebrating his 20th birthday. Then, he became one of the top five players in the sport during, well, 22 more years. For a long time he was the all-time leader in home runs, with 755. But Aaron was much more than a gunner, finishing with a .305 batting average and remaining the career leader in RBIs and total bases reached (plus, stole 240 bases). In addition, he was a leader in the fight for civil rights off the field. One of the last things he did in his life was to encourage everyone to get the COVID-19 vaccine. There will be no other Hank Aaron. No one has ever come close to it.

Joe Altobelli (1932): A record in the minor leagues, playing almost 1,900 games over 18 seasons. However, he made a name for himself as a manager, remembered primarily for leading the Baltimore Orioles to win the 1983 World Series. There is a statue of him in Rochester, Minnesota, where he was a player, coach, manager and storyteller with the Red Wings. .

Mike Bell (1974): Bell was part of a baseball family: Gus was his grandfather, Buddy his father, and David his brother. He was selected by the Rangers in the 1993 amateur draft and worked in the D-backs ‘offices before serving as the Twins’ bench coach in 2020 and falling ill in July of that year. He was diagnosed with cancerous tumors in his kidney in January and in March he passed away at the age of 46.

Bobby Brown (1924): Known as the “blonde freak” during his time as a player with the Yankees, Brown was a complete person. He earned a medical degree during his years with the Bombers (in which he won four World Series) and practiced as a cardiologist after his retirement from baseball. It also saw combat in two wars. Then he was in the Rangers’ offices and was president of the American League for a decade.

Rhéal Cormier (1967): Cormier is inducted into the Canadian Baseball Hall of Fame, after pitching for 16 seasons in the majors. As a member of the Phillies, he was the last pitcher to win a game at Veterans Stadium and the first to do so at the new Citizens Bank Park. He represented his country at the 2008 Beijing Olympics.

Joe Cunningham (1931): He was called up to the All-Star Game twice – although both were in the same season, 1959 – and played for 12 years in the majors, mostly with the Cardinals. When he retired, he remained in St. Louis as the coach of the 1982 World Series champions. There is a section at Busch Stadium called the “Cunningham Corner.”

Ray Fosse (1947): He won two Golden Gloves, was called up to two All-Star Games with Cleveland and won two World Series with Oakland. He was the catcher for Dennis Eckersley’s no-hitter and then was a part of the Athletics broadcast team for nearly 40 years.

Bill Freehan (1941): He was called up to 11 All-Star Games with his usual team, the Detroit Tigers (he even played college football with Michigan).

Jim “Mudcat” Grant (1935): He won two games of the 1965 World Series for the Twins and hit a three-run homer (unfortunately for him, the Dodgers won the title thanks in large part to Sandy Koufax). He wrote a book called “The Black Aces,” focusing on 12 African American pitchers who won 20 games in one season (three – CC Sabathia, Dontrelle Willis and David Price – have been added since the book was published).

Roland hemond (1929): Was scout director and executive for several years. He was general manager of the White Sox from 1970 to 1985 (he hired Tony La Russa) and the Orioles from 1988 to 1995. He was also the one who came up with the idea for the Arizona Fall League.

LaMarr Hoyt (1955): The Yankees traded Hoyt to the White Sox for Bucky Dent. He started as a reliever until he transitioned to starter and won the 1983 Cy Young Award. He was the MVP of the 1985 All-Star Game when he was with the Padres.

Doug Jones (1957): Jones became a member of the 300 saves club by throwing slow pitches. He was called up to five All-Star Games.

Tommy Lasorda (1927): One of the most colorful characters in baseball during his 40 years with the Dodgers organization. He went from throwing three wild pitches to leading the team for 21 years, winning two World Series in the process. His last game was interrupted because he went into cardiac arrest; drove himself to the hospital (the Dodgers won). He returned to win the gold medal as a team driver for the United States in 2000.

Julio Lugo (1975): The Dominican shortstop played with seven teams and won the World Series with the Red Sox in 2007. Lugo died suddenly of cardiac arrest at age 45.

Mike Marshall (1943): He was the first reliever to win a Cy Young, in a season in which he participated in 106 games. (Including 13 in a row. Both numbers are still records). He played with nine teams in his career.

Jerry Remy (1952): He was called up to the All-Star Game in 1978, but will always be remembered for being the voice of the Red Sox, broadcasting games for the NESN network for more than 30 years. He pitched the first pitch in this year’s Wild Card Game and then passed away from lung cancer three weeks later.

JR Richard (1950): At the peak of his career, in the late 1970s, Richard was said to throw the ball faster than anyone else in the world. He struck out 313 opponents in 1979 – during a time when there were far fewer strikeouts than now. Johnny Bench said he was the toughest pitcher he had ever faced. He suffered a stroke while warming up before a game and did not pitch again in the majors.

Art Stewart (1927): He was director of scouting for the Kansas City Royals for a long time. He was the one who brought the Puerto Rican Carlos Beltrán, Johnny Damon and Bo Jackson.

Don Sutton (1945): He was a rookie on a rotation that featured Sandy Koufax and Don Drysdale. He was a star with the Dodgers for more than a decade, being called up to four All-Star Games and being MVP of the 1977 Midseason Classic. He had a career of more than 20 years and pitched in the 1974, 1977, 1978 World Series. and 1982, although his team won neither of them. He was inducted into the Hall of Fame in 1998, being the only one to enter that year. He also had a long career on the Braves broadcast team.

Pedro Feliciano (1976): The Puerto Rican was reliever with the Mets.

Paul Foytack (1930): Participated in 312 games as a pitcher for the Tigers and Angels.

Johnny groth (1926): It was a promise from the Tigers that he was called “the next DiMaggio” at the time.

Billy moran (1933): Summoned to two All-Star Games with the Angels.

Juan Pizarro (1937): He is part of the Puerto Rico Sports Hall of Fame, after playing 18 years in the Majors.

Ken reitz (1951): Gold Glove winner of third base with the Cardinals.

Eddie Robinson (1920): He was the last player left to win the World Series with Cleveland and saw combat in World War II.

Richie scheinblum (1942): Summoned to the All-Star Game with the Royals.

Stan Williams (1936): He won two World Series and was called up to two All-Star Games.

Those who said goodbye in the year 2021