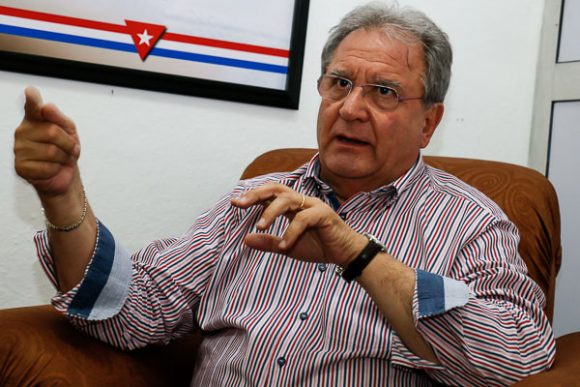 The World Baseball Softball Confederation (WBSC) will not recognize an independent baseball team representing Cuba in the next World Baseball Classican event that he organizes with the Major Leagues.

The Italian Ricardo Fraccari, President of the WBSChe told the Cuban state television program live ball what only the national federations can decide which team represents them. Thus, he dispelled the concerns of the island’s authorities, who had attacked the possibility of an independent teammade up of players who play in the Major Leagues.

Proud to contribute my grain of sand to this beautiful project of the @beisprocuba. I leave you the uniform proposals I designed for the Association team. You will be able to vote on its different platforms for your favorite design. pic.twitter.com/vm5XjnN6xr

“The WBSC is the only recognized international governing body for the sports baseball and softball legally established by agreement of its own statutes and also of the Swiss code,” said the manager.

“According to the statute, the only entities that can form a national team, use the colors, the uniform and the flag are the full members, which are the national federations. So, these have the right to form a national team in any event of the WBSC or recognized, sanctioned, by the WBSC”, he added.

The official Cuban press had already made reference to the WBSC statute, which establishes that it is the baseball federation of each country that determines which team will represent it. For this reason, Michel Torres Corona, host of the program With edgehad predicted that the initiative launched by the Association of Professional Cuban Baseball Players (ACPBP) to establish a Cuban independent team to participate in the next World Baseball Classic “had no chance at all”.

However, the ACPBP has stated from the beginning that its intention is send a request to Big leagues to analyze the inclusion of a selection of emigrated Cuban baseball players in the next World Baseball Classic.

The idea is based on the fact that the island’s authorities deny players like Yulieski Gurriel, Joseph Abreu Y Aroldis Chapmanamong others who play in the Major Leaguesthe possibility of representing your country in international events.

This exclusion has nothing to do with their quality, more than demonstrated in the best baseball in the world, but rather with the fact that they abandoned Cuban teams abroad, which is why, in addition deprived of the right to enter their homeland for at least eight years.

“Really, with the best players we have in the world, I think unification would be perfect. We have players in Japan, we have players in Mexico, in Canada, playing in other leagues, who have great quality. I think that together we can continue putting the name of Cuba in world baseball”said Eriberto Rosales, manager of the Avispas Santiagueras that are involved in this National Baseball Seriesnot to mention the Major Leagues of the United States.

Guillermo Carmona, director of industrialfor his part, stated that he would like it to be “the best team”.

“I understand that the team must be the best, because when you say Cuba, for me it is Cuba. And chen we talk about Cuba, I want it to be the team that can best represent us“, said.

“We would all like to have a strong team, with the best conditions,” he said. Alexander Malleta, former player of the Industriales team and the national team. “I think that the best Cuban baseball playersIf they have the chance to participate, let them be. I think they are going to defend our country, our flag. They are players made here, in our country.”

but in the program live ball it became clear once again that those who have abandoned “an official Cuban baseball event” are ruled out.

“By Cuban sports regulations, they do not have options to be part of a Cuba team“, sentenced the journalist Carlos Hernández Luján, host of the program.

A uniform reminiscent of the Cuban Sugar Kings

Although the chances that the ACPBP can fulfill the dream of leading an independent Cuban team to the next World Baseball Classic are reduced, there are already designs of the uniform that the players would wear.

The designer Carlos Rojas showed on his Twitter account the uniform proposals that he elaborated for the team, which allude to the the Sugar Kings, a minor league teamaffiliated with the Havana-based Cincinnati Reds, who played in Triple A from 1954 to 1960, before Fidel Castro eliminated professional sports on the Island.

“Proud to contribute my grain of sand to this beautiful project of @beisprocuba. I leave you the uniform proposals that I designed for the Association team. You can vote on your different platforms for your favorite design,” he wrote.

“In the home club it bears the name Cubanos, alluding to the name on the suit the Sugar Kings played in Havana. I changed the typography but kept the script style. The second uniform (striped) is a modern replica and with adjustments to the one from the Sugar Kings,” Rojas explains about the design of the uniforms.

As for the uniform that the team would wear when playing as a visitor, he explains that “it is more adjusted to the major league model. Two-color shirt and gray pants. A full gray version with blue sleeves. On the left sleeve I placed a circle with #16 in tribute to José Fernández”.

The designer thanked the cuban pitcher Raisel Iglesias and the businessman Mario Fernández, creator of the ACPBPfor trusting his talent.