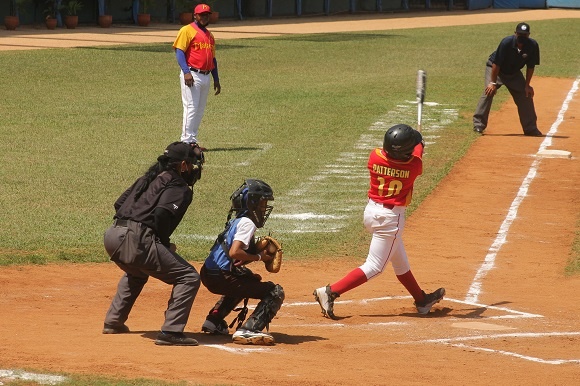 With the traditional skills tests, the actions of this Saturday in the weekend of the stars of the 61 National Series closedin the decorated Victoria de Girón stadium, headquarters of the Crocodiles from Matanzas.

In the midst of the good baseball atmosphere that exists in Yumurian lands due to the return of this festival after six years of absence, athletes from various provinces of the country came out to the ring to demonstrate the tools that have allowed them to excel in this game.

Eight “roadrunners” flew low from home to first and the prize went to Pinero Eliseo Rojas, with a time of 3.45 secondsfar from the record for this test, held by Omar Linares since 1994 (3.28), and below that achieved in 2020 in Santiago by local José Luis Gutiérrez (3.42). 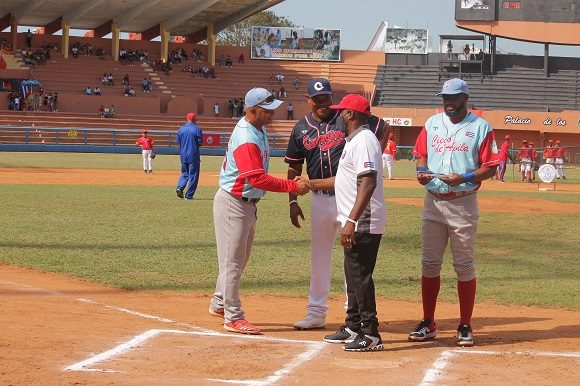 The winners of the double play. Photo: Boris Luis Cabrera/Cubadebate.

In the combination of double playthe fastest was the one integrated by Yorbis Borroto (CAV), Raúl González (CAV) and Yordanis Samón (CMG) with a time of 2.18 seconds, slower than the record set since 1986 by the Camagüeyan trio of Luis Ulacia, Sergio Quesada, and Leonel Moa (1.91), and the record achieved in the previous version by the combination of Borroto himself (CAV), Jorge Enrique Alomá (IND) and Lisbán Correa (IND), when they stopped the clocks at 1.95 seconds.

In the shot of the receptors to the barrel, the award for the most accurate went to the industrialist Oscar Valdés (the second time he has achieved it in an All-Star Game), and from the outfield the most precise was Carlos Gómez from Sancti Spiritus.

The highlight of the skills competitions was the Derby of home runs in their qualifying phasein which Pedro Pablo Revilla (17) from Guantanamo and current monarch Yasel Julio González (12) from Pinar del Río dominated, followed by Alfredo Fadraga from Avilanian and Rafael Viñales from Las Tunas (9), who will fight this Sunday for the title.

Before the demonstration of “skilled” it was possible to enjoy the exhibition challenge between the children of Matanzas and Bayamomunicipal teams that play the Little League tournament, currently immersed in their national championship in search of Cuba’s representative to the Caribbean regional tournament, which will take place in the Dominican Republic in July.

The Bayamese, current national monarchs, were the winners this afternoon with a final score of 12-1in a nice baseball game, and now they will prepare to look for their pass to the grand final next Saturday, agreed for the month of April.

The challenge was decided from the very first chapter, when the Orientals manufactured a six-point package, which their rivals could never match.

The most valuable player was Pedro Castillo, 3-3with some fancy defensive plays at shortstop and, in addition, nine consecutive strikeouts in relief duties, to score the victory.

The only home run of the game came off the wrists of Luis Enrique Gurriel (3-3), with two teammates in circulation.

This Sunday, after the end of Derby home run, the stars of Occidentales and Orientales will face each other.

On video, statements by Pedro Castillo

“This victory has been very important for me, because I am a rookie in the Series. Having reached the All-Star Game had already represented a satisfaction. Now, winning one of the skill tests is a dream come true. This shows how talented the young outfielders are. We need more powers to ratify it.” (Carlos Gomez, winner of the outfield throw to home).

“I feel happy to be in the All-Star Game and, at the same time, to get first place. The important thing is to enjoy the moment. I am happy with my sports form and that inspires me. I intend to continue like this, to repay the trust that my teammates, the fans and my family have placed in me. On Monday I join Industriales with this momentum, to fight for classification.

“These Games have been very nice and the reception has been impressive. It’s an opportunity to share with players from other teams, because in the middle of the Series it becomes quite difficult for us”. (Oscar Valdés, winner of the barrel shot)

“Many years in the position and as I told my teammates, this is not about strength but about agility. Also, stealing time without doing tricks, and using your arms a lot. Today at good time we did quite well. The most important thing is that we went out to have fun, and that the public also had a good time”.(Yorbis Borroto, one of the winners of the double play)

“I went out to do the time that I have always done to win the competition. My goal was met and I was able to dedicate the success to the Island team. I am satisfied, because I lowered my personal best to 3.45 seconds, which was 3.47” (Eliseo Rojas, winner of the race from home to first).

On video, declarations of the winners

The weekend of the stars has started! (+ Photos and Video)