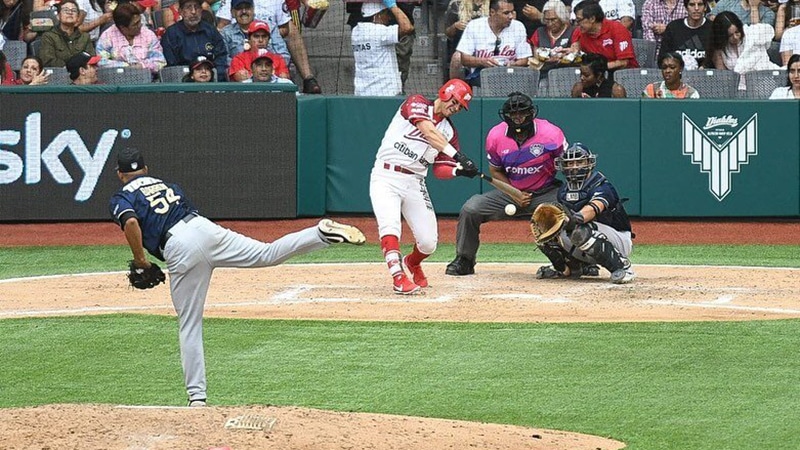 During its years of history and recent years the Mexican League from Baseball (LMB) played in the summer, it has been seen as a hitter’s paradise, where the hitting is on display and the pitching records are disastrous.

The mariachis from Guadalajara they debuted in the LMB during 2021, having a leafy year collectively in offensive matters with a slash line of .338/.411/.531, which if the question arises, no team in the history of baseball in the Big leagues Americans (MLB) has achieved these records or higher in a season.

Only 197 seasons of players in the history of MLB they have achieved that offensive line or higher, while in the post-integration era it has only been about 67 seasons, the last one was by Mookie Betts with the Boston Red Sox in 2018.

Among the Mariachis of Guadalajara, Saraperos from Saltillo, Parrots from Puebla, Sultans from Monterey Y Bulls from Tijuana combined for an average OPS of .842, which was simply abysmal and another demonstration of the absurd offensive environment that in the LMB as a league you live.

Only four teams in MLB history have managed to combine such an average OPS in the same season, being during 1930 the New York Giants, St. Louis Cardinals, Chicago Cubs and the New York Yankees. It has only happened 12 times in Major League history where a team has managed to combine an OPS greater than .842 in a season, the last ones were the Houston Astros in 2019 and before them they had been the Boston Red Sox in 2003.

What is the why behind all this?

We could start by talking about how low pitching is in the league or how high hitting is, although it’s a discussion that could go on for days without a very clear conclusion. Although instead we could be able to decipher another more accurate conclusion such as the following:

For years in the Major Leagues it has been said and statistics indicate that Coors Field is the park that most helps the offensive, which is well driven by its location in Colorado, a city that is located at an average altitude of 2073 meters above sea level. from sea. On the other hand, we have the Oakland Coliseum, which is one of the parks with the least support for the offense and it is a park that we could call for pitchers, but located in a city only an average of 13 meters above sea level.

With this, the conclusion is evidently born that in cities with a greater number of meters above sea level is where the ball runs the most, which is what happens due to the location where Coors Field is located, repeating that result with the parks of the LMB.

The teams from Guadalajara and Saltillo were the two most offensive teams in the LMB in 2021, two cities located at an average altitude of 1566 and 1560 meters above sea level, which clearly drives the result of their teams. The tigers from Quintana Roo and the pirates from Campeche they were the least offensive, although teams located in cities with an average of 31 and 390 meters above sea level.

The Quisqueya Stadium in the city of Santo Domingo, which is shared by the Tigres del Licey and the Leones del Esgido in the Dominican Republic Winter League, has been seen as one of the most difficult stadiums for the offense in the league, which is well constituted in its location in a city just 15 meters above sea level. On the other side, the Julián Javier stadium in San Francisco de Macoris has been the one with the greatest support for the offensive, although in a destination with an average location of 110 meters above sea level.

Regardless of the caliber level of the players or not, the location of the league’s parks has been a vital factor in the abrupt offensive records in the LMB, ranging from the absurd to the surprising.

Along with Carlos Moreta, this article had the valuable collaboration of Luis Amparo (@luisamparou on Twitter).

The reason behind the high offense in the Mexican Baseball League