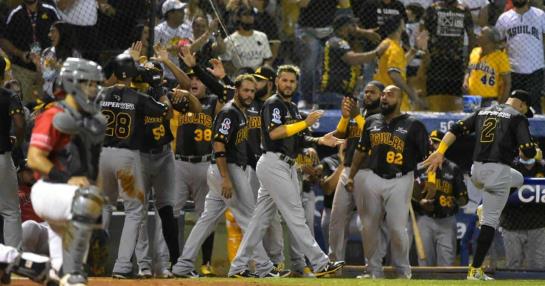 The guinea pigs are in the money. The shock of looking for his ticket at round robin through the Play In wore off early and while there was hairy backlash, the reigning champion ensured that the centennial of the Selected pass without a major celebration.

In the Quisqueya, Joe Van Meter tamed the Lions for six innings and Leody Taveras put more pressure on his candidacy for MVP, at the time of the voting, and the Eagles Cibaeñas defeated the Scarlets 5-3 in the life or death game to advance to the postseason.

The ninth yellow, which lost on Sunday 12-9 which forced to play an extra game, completes the fourth classified at round robin, a stage where Giants, Stars and Tigers await, scheduled to start next Monday.

A phase where those led by Félix Fermín arrive with the option of becoming the first team to repeat the crown since the Selected to do so in the 2011-12 and 2012-2013 academic years.

Taveras went 5-2, with a run scored and an RBI, as did Zoilo Almonte, and Juan Lagares 5-2. For the Reds, Franchy Cordero 1-1, with a home run and three RBIs and Iván Castillo 4-2.

The re-entry draws (native and imported) will take place this Wednesday afternoon with the players who declare themselves available from the Selected and Bulls.

The guinea pigs opened the board in the third, after two outs. Taveras surprised the pitcher with a touch and anchored in the initial, settled on third base with a single to left field by Lagares and scored with an unstoppable to the center of Almonte.

In the fourth, the visit inflated the difference. Danny Santana opened with a hit to right, Eric Filia reached base on a fielder’s choice with ground to second and Felipe Tejada went up to pitch for Molina. Francisco Peña touched, the pitcher picked up the ball and threw late to third which resulted in the bases being filled. Then Valenzuela grounded down shortstop that forced the out at second and Santana scored. Torres struck out, but the catcher didn’t hold the ball and the pads were refilled.

Francisco Pérez climbed the mound, Taveras got a ground ball for the first that Aderlin Rodríguez fumbled and they scored two more laps for the 4-0.

In the sixth Cibaeños, Valenzuela opened with a hit through the middle of the field, Torres moved it with touch and Taveras drove in with an unstoppable right off Enny Romero.

The scarlet reaction came at the close of the seventh. Against Peralta, Aderlin Rodríguez started with an uncatchable left, Estevan Florial lined out to left and pinch-hitter René Pinto struck out. Then Luis Liberato received a transfer and the emerging Cordero hit a home run down the right that placed the clash 5-3. l

Graduated in Social Communication from O&M University. He has worked as a journalist specialized in sports since 2001.