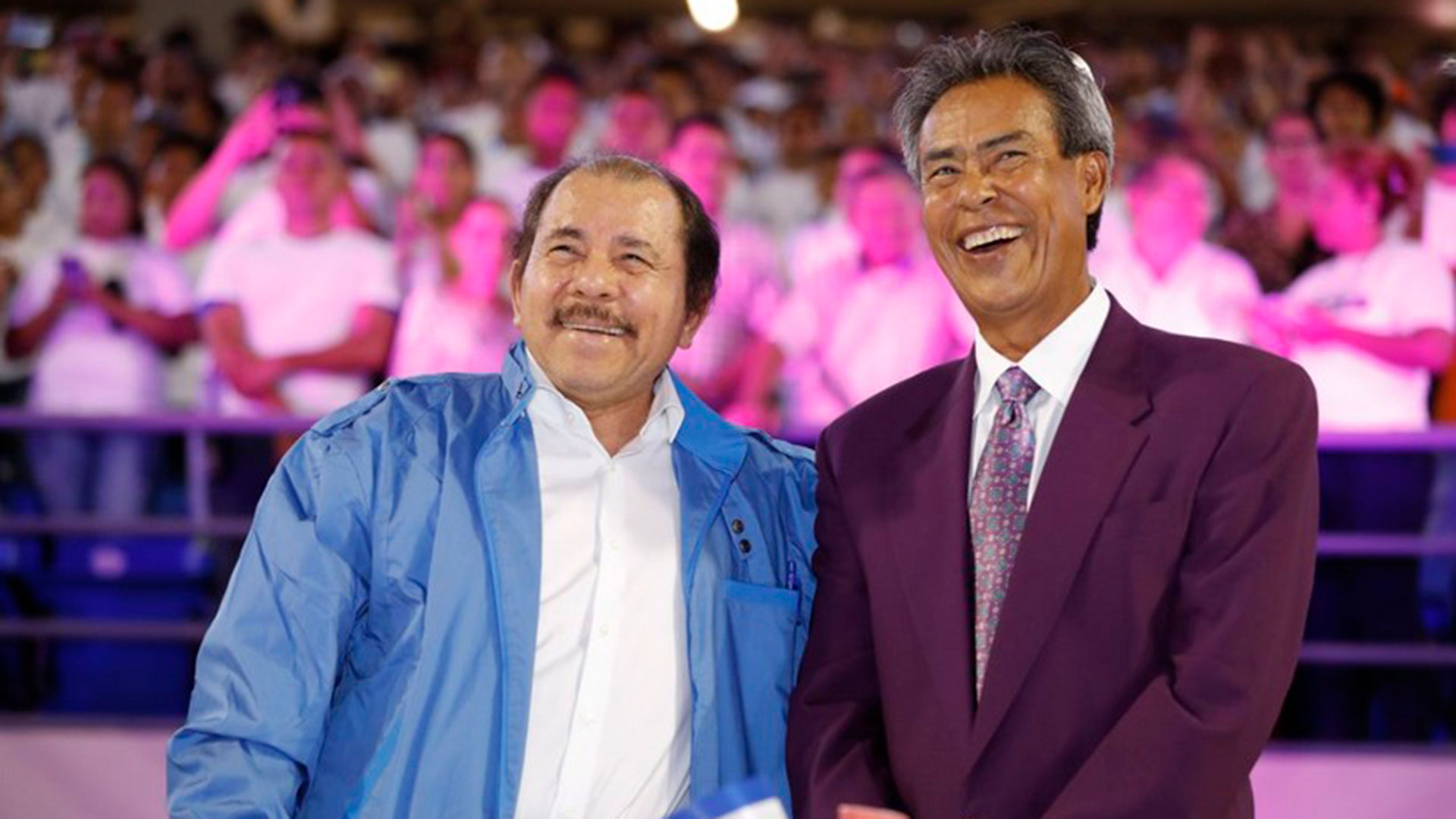 Daniel Ortega and Dennis Martínez during the inauguration of the stadium that bears the name of the latter, in October 2017. (Photo 19 Digital)

The ceremony was attended by, among others, Daniel Ortega accompanied by his wife, Rosario MurilloCardinal Miguel Obando and, of course, the honoree of the moment, the Nicaraguan baseball player, Major League Baseball star, Dennis Martínez.

Dennis Martínez, 68 years old, is the first Nicaraguan to reach Major League Baseball (MLB), in the United States, in 1976, after being recruited by the Baltimore Orioles team. On July 28, 1991, he established himself as the 13th pitcher and the first Latin American in the history of those leagues to achieve a perfect game, by dominating the Los Angeles Dodgers while playing for the Montreal Expos team.

“What a bigger dream, who could even dream it, someone will tell us later, that a Nicaraguan, of this mestizo combination that brings indigenous blood, that’s why he said that he reincarnates Diriangén, was going to achieve a victory that would fill all the world with glory.” Nicaragua, which would fill all Nicaraguans with pride, the perfect game of Dennis Martínez there in the Major Leagues”, said Daniel Ortega in his speech during the inauguration of the building.

This Wednesday, however, the stadium appeared without the name with which it was so pompously inaugurated. The name Dennis Martínez was erased from his frontispiece, from the official website and from sports advertising, as in that biblical passage where the Pharaoh of Egypt orders the erasure of the name of Moses, after the beginning of his exodus. 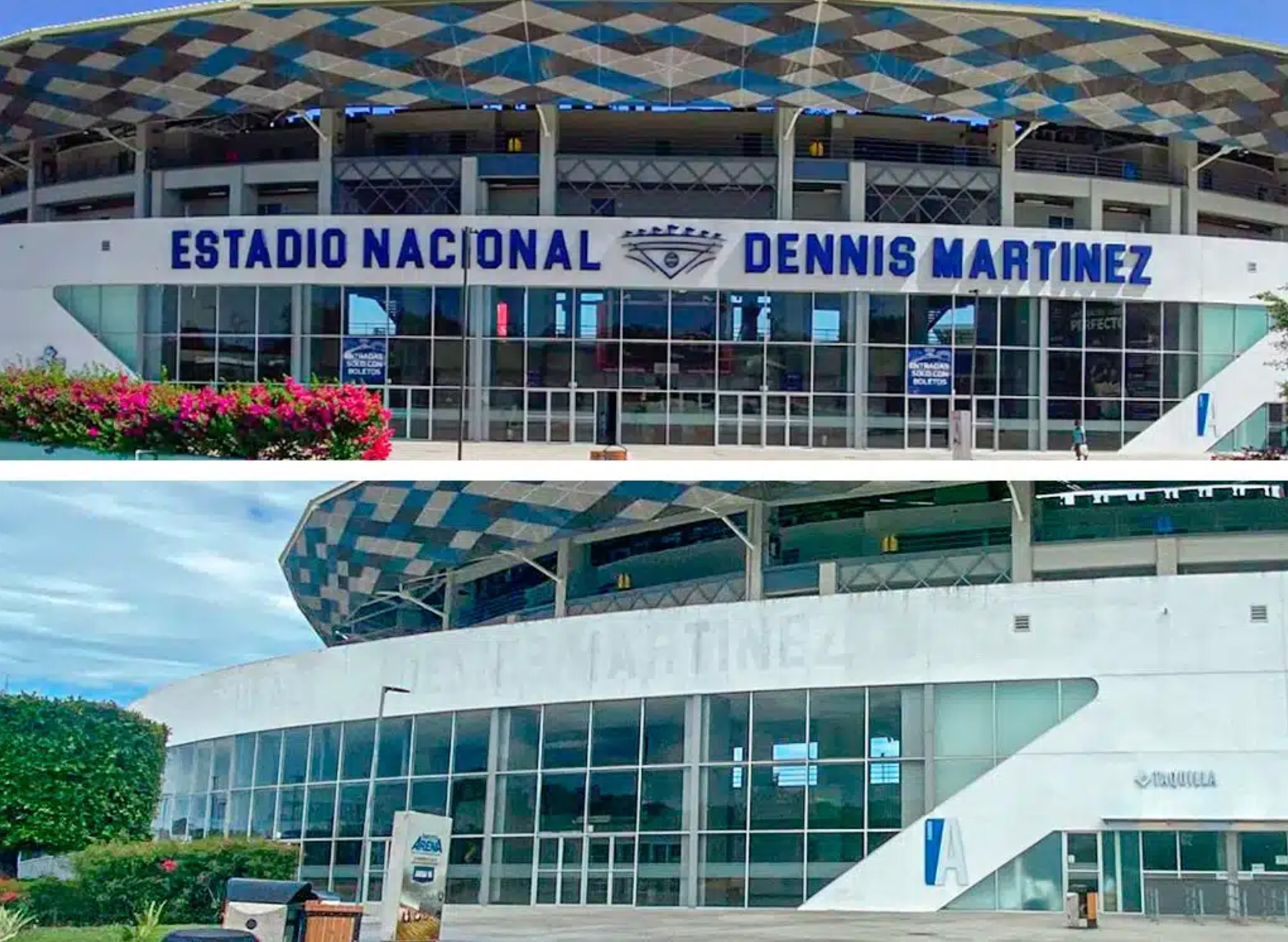 The letters that identified the stadium were erased and the name “Dennis Martínez National Stadium” disappeared from official communication.

The Dennis Martinez National Stadium It was built in the center of Managua and is the largest stadium in Nicaragua and the fifth largest in Central America and the Caribbean. It has capacity for 15 thousand spectators. Its construction was supervised by Major League Baseball.

For its construction Taiwan donated 34 million dollars that were later diverted to the construction of low-income housing, so it was completed through an obscure financial operation with a loan made by the State to a local bank. It is estimated that the stadium finally cost 50 million dollars.

A year after its inauguration, the stadium was used as operations center for paramilitary forces that repressed the protestsand on May 30, 2018, paramilitary and Police snipers positioned themselves on the heights of the building to shoot at a massive protest demonstration, in a bloody day that left at least 19 people killed.

The next day, Martínez, who until then had avoided making political comments and lives in the United States, regretted what had happened in a statement. “I want to express my condolences to all the mothers of Nicaragua yesterday and especially to those who have lost a loved one, due to the tragic and painful situation in my country.”

“It hurts me to know that the National Stadium that bears my name is being used for purposes of violence, affecting my Nicaraguan brothers.”, he added. “I hope you understand that I do not have any interference so that they use it in the way that the Nicaraguan authorities want to use it, but I would ask that out of respect for my person, that I made an effort and carried on my shoulders for many years representing my country with a lot of pride, stop using it for those purposes. Because those are not the values ​​and principles of my person”.

Dennis Martínez is the best baseball player Nicaragua has had in its sporting history.

Since then, Dennis Martínez took a more active attitude in the search for a peaceful solution to the crisis that Nicaragua is experiencing. He spoke in favor of a dialogueand integrated a group of notables baptized as “Goodwill Commission. to bring together different opposition groups. He also started publishing a weekly opinion column in the daily The Pressfrom where he criticizes many of the actions of the Daniel Ortega regime.

As a result of Martínez’s critical position, different commentators related to the Ortega regime asked to remove the name of the former major league player for “ungrateful” Y “traitors”. Officially, the reason for the name change has not been explained. However, official programs support the action.

“Dennis Martínez, specifically in sports, is undoubtedly an old glory of our baseball, he was a celebrity,” acknowledges the official journalist Moisés Absalón Pastora in his program Moment Detailsto then stab: “Since 2018 Dennis Martínez stopped being the athlete and became a politician and not just any politician, but an opportunist, ungrateful, scammer, thief and terrorist who came to celebrate that the stadium, which bore his name, was burned down by the hordes that he supported.

From the eve of the inauguration, there was pressure among the Sandinistas to choose the name of a baseball player sympathetic to the regime, but Dennis Martínez’s career prevailed by far.

After serving in the Nicaraguan national baseball team, Dennis Martínez made his Major League debut on September 14, 1976 with the Baltimore Orioles, at age 22.

His career was set back by alcoholism, and in 1983 he was arrested for driving while intoxicated. However, he overcame it and on July 28, 1991, he established himself as pitcher number 13 and the first Latin American in history to achieve a perfect game in the Major Leagues, the greatest feat a pitcher can achieve in this sport.

In his honor, the National Stadium was named after him and was called “The House of the Perfect Game”.

A perfect game in baseball is one in which a pitcher goes nine or more innings without allowing any batter to reach base, that is, he does not allow a hit, walk, or direct hit to the batter.

The particular viciousness of Daniel Ortega with the business leader who was his ally for ten years
The Catholic Church in Nicaragua is experiencing its most difficult year: 127 attacks by the Daniel Ortega regime
Daniel Ortega advances in his lifelong dream: a one-party regime in Nicaragua