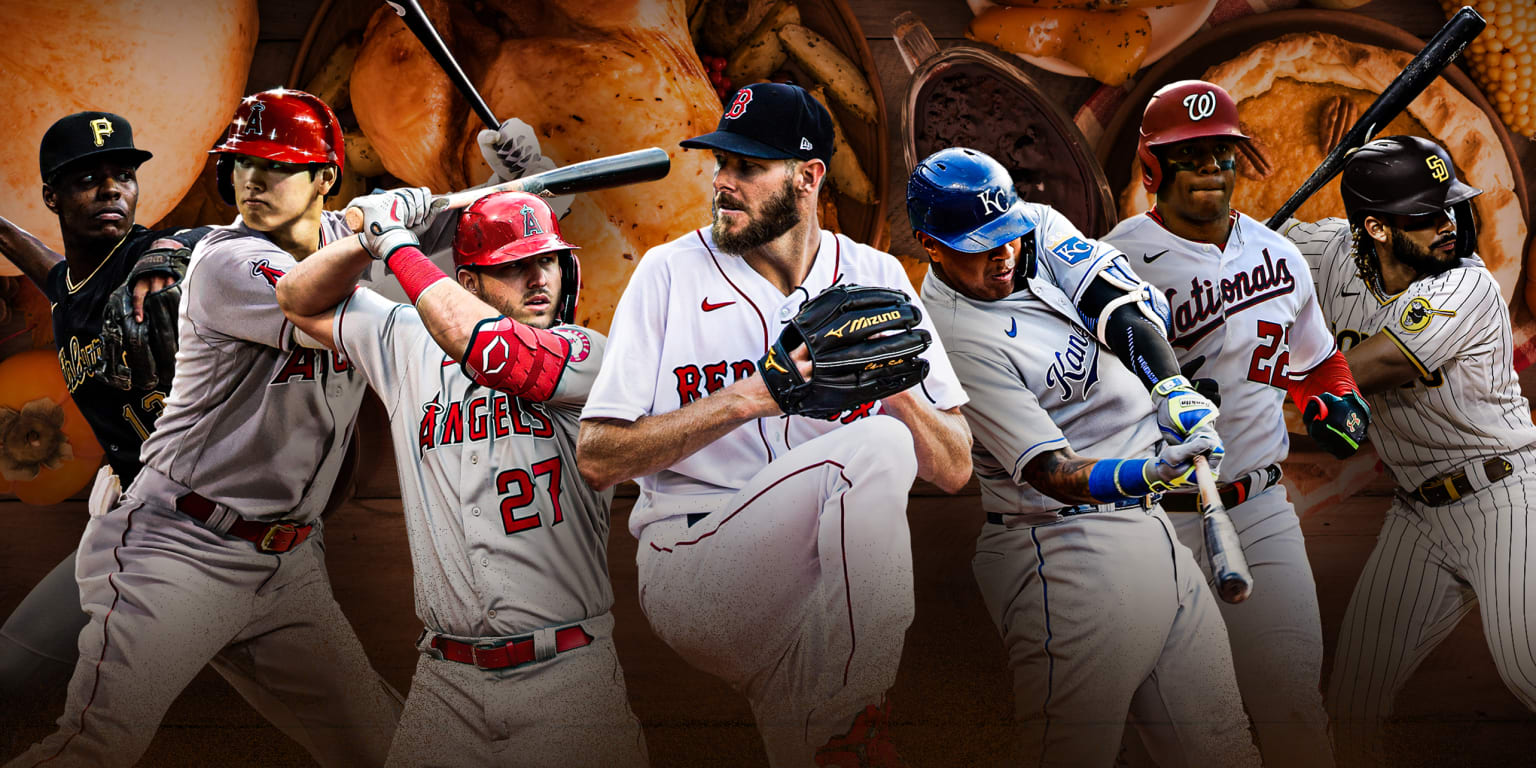 It’s Thanksgiving week! Happy Thanksgiving Day! Thanksgiving is a very special holiday, even if it is a day when we cannot enjoy Major League Baseball. The best part of all is that it is a day specifically chosen for us to reflect on all those things for which we are grateful: What is really important in our lives, what we give thanks for. A very nice day. There should be more days like this.

So today in Los Treinta, we’ll go over one reason each of the 30 teams has to be thankful for. Maybe it’s a player, a concept, a state of mind or the feeling that the club’s situation is going to improve. But there are always reasons to be thankful.

These young and exciting Blue Jays have not played their 81 home games in Toronto – the city where they are supposed to play – since 2019. In 2022, their home will be their home again.

The expectation has lasted longer than some fans would like, but the catching phenomenon will arrive for sure in 2022. And everything indicates that it will have been worth the wait.

Rays: They come from winning 100 games for the 1st time in club history

For all the talk of the Rays this year, this was not given the attention it deserved: Tampa Bay had the best regular season ever this year. Good starting point to start saying thank you, right?

We saw glimpses of the Sale from the past at some points in 2021, but next year will arrive as rested as possible.

The Yankees haven’t reached the World Series since they won the 2009 World Series. There are several holes in the team, but also some stars. There are very good free agents available and the way to improve is that. The Yankees know how to make that formula work.

Guardians: The new name is here

A new era has arrived and with it comes many emotions and the possibility of a real renewal.

Royals: Salvador is still in the team

Venezuelan Salvador Pérez continues to improve as a hitter and has already secured his place among the legends of the Royals… and one of the best players of the moment.

Nobody knows exactly what moves the Tigers will make this winter, but they are clearly moving (they have already signed Venezuelan Eduardo Rodríguez), all after a 2021 season in which, at last, they showed real signs of life.

It might sound a little weird to say thank you for something like that. But then you remember everything that happened to the Twins this year.

The White Sox were too young to win and then they didn’t know “how” to win. Now, they easily advanced to the postseason. Next step: Make it through the playoffs. When you see it that way, the ascent has been logical.

The Angels obviously need a lot of pitching, but boy: If you can’t be grateful to have these two guys at the club, what could you be grateful for?

Astros: They have more proof of mastery

They will never be able to silence the haters, but coming to the 2021 World Series, the Astros walked away from the sign-stealing scandal for another year… and once again looked like one of the best teams in the Big Top.

Athletics: Any rebuilding process will be brief

The Athletics appear to be preparing for a rebuilding cycle. It takes most novenas half a decade to complete that process. But not to Oakland.

Sailors: The drought is about to end

Maybe it’s in 2022. Maybe it’s a year after that. But the Mariners are putting something together and we are close to seeing the rewards. Seattle fans have been waiting since 2001 to return to the postseason and their patience is yet to be rewarded.

The Rangers need reason to cheer up their fans and there are rumors that they are willing to spend this year. They have many options to choose from.

Braves: They won the World Series!

Did they miss it? I hope not. It was very exciting. The Braves won the World Series!

The Marlins may well have the best rotation in the NL East, a group led by its young pitchers. The offense needs help, but having good starters is always a good starting point.

Mets: They now have a leader

It took longer than anyone would have liked, but the Mets finally have a general manager, Billy Eppler, and a clear course. It may not be much, but it is better than before.

The Nationals have many other things to worry about, but they have Juan José Soto, which is equal to many must-see at-bats in each game.

The Phillies have plenty of other things to worry about, but they have Bryce Harper, which equates to plenty of must-see at-bats in every game.

We’ll see if they end up getting that elusive World Series title, but it wasn’t long ago that the Brewers had decades without making the postseason. Now, we all hope they win every year.

Defense never goes bumpy (or so they say) and when you have five Gold Gloves, you have a great starting point for building a team.

Cubs: The Wrigley is Eternal

The team is rebuilding, but this is the best place in the world to go see a ball game… or go for a walk outside the stadium on a cold Chicago fall night.

A wrist injury derailed what should have been his first full season, but in 2020 he proved that he can be that franchise player that Pittsburgh needs.

The Reds are in a transitional period, but the timeless wonder of Joey Votto is still here and what a gift that is to the rest of us.

D-backs: Things are going to get better

There are years when everything seems to go wrong. 2021 (110 losses) was like that for Arizona. But this team has a history of exceeding expectations. And the only thing they can do is improve.

Dodgers: Can win 106 games and still be disappointed

What a luxury for a franchise to be in a moment like this: Have a historically great campaign and still disappoint your fans.

Giants: The glory of the 2021 campaign

The loss to the Dodgers in the Division Series (specifically because of the way it ended) was undeniably frustrating. But a season in which you won 107 games when the most optimistic projections before the campaign gave you about 20 less is something incredibly special. This team earned the trust of its fans.

Parents: There are still stars everywhere

The Padres were a huge disappointment in 2021, but they are still armed with talent, starting, of course, with Fernando Tatis Jr., who remains a superstar. They will be fine.

Rockies: A fantastic fan base

The Rockies finished in the top 10 teams in attendance in 2021, despite their negative record. Someday this team will win a lot and when they do, their fans will be able to tell that they were there supporting them the entire time.