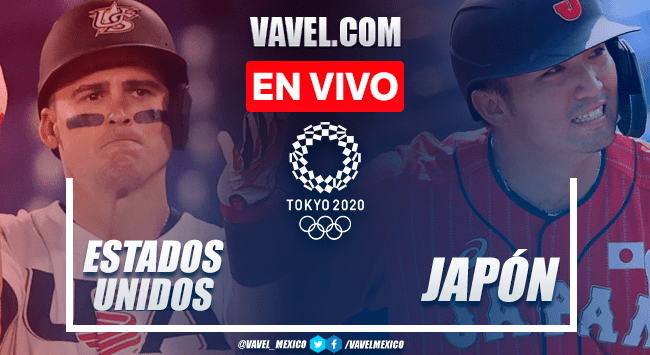 Takuya Kai singles, and Yuki Yanagita scores to end the game. Japan come back and defeat the United States 7-6.

It should be remembered that, as the regulations dictate, both teams — at the start of the additional inning — will have runners at first and second base.

Ryosuke Kuchi is eliminated through the strikeout, and ends the ninth inning of the game. There will be extrainnings.

Yuki Yanagita grounds out, but Sosuke Genda advances to second base and Seiya Suzuki scores and equalizes the score.

Japan has runners on the corners, with only one out. He has the tie of the match in his hands.

The United States goes in line, without hitting; even so, he is three outs from Japan to make it to the semifinals.

The United States and Japan teams do not hurt each other in the seventh and eighth innings of the game; everything continues 6-5.

Seiya Suzuki strikes out, ending the sixth inning of the game; Japan continues to fall to the United States.

Hayato Sakamoto does not hit and is eliminated by strikeout.

Koudai Senga, pitcher for Japan, does a great job and ends the sixth inning for the United States by striking out Eddy Alvarez.

Nick Allen and Jamie Westbrook are eliminated through the strikeout.

Ryutaro Umeno doesn’t hit and is struck out. Finish the fifth inning, and America is ahead of Japan by one race.

Munetaka Murakami grounds out; Ryosuke goes to third base.

Ryosuke Kikuchi singles to shortstop; Hideto Asamura scores the fifth run of the game for Japan.

Yuki Yanagita grounds out, but Hideto Asamura goes to third base.

Hideto Asamura hits a double with a fly to center field.

Seiya Suzuki hits a home run to left field; Japan gets closer on the scoreboard.

Eric Filia is eliminated through the strikeout.

Triston Casas hits a three-run homer to right field; The United States is ahead again on the scoreboard, now by three races difference.

Masataka Yoshida connects, but is dominated from second to first base. After three full innings, the United States and Japan are matching three runs.

Jamie Westrbook Strikes Out One More Time; The United States finishes its fourth batch of batting, but is already winning.

Nick Allen doubles to right field; Mark Kolozsvary goes to third base and Eric Filia scores and overtakes the United States on the scoreboard.

Jack Lopez is struck out, and the second out of the inning falls for the United States.

Eric Filia goes to first base after being hit by the pitcher.

Triston Casas is walked on a base on balls. Todd Frazzier hits a double heading to center field; Triston Casas scores and brings the United States closer to the board.

Tyler Austin fans and is struck out

Ryosuke Kikuchi connects and forces the out, as Hideto Asamura is eliminated at third base. After full innings, Japan is beating United States by two runs.

Yki Yanagita singles to shortstop; his companions move from base again, Yoshida Masataka scores second run of the game. Japan extends its lead and has a full house.

Hideto Asamura also walks; his teammates advance a base, and Japan has a full house.

Seiya Suzuki is walked on balls; Masataka Yoshida moves to second base.

Ryutaro Umeno and Tetsuto Yamada are contained and the first outs of the inning fall for Japan.

Eddy Alvarez is pitcher content to first base; The United States goes without hist in this entry.

Jamie Westbrook hits, but is contained by the pitcher to first base.

Nick Struck is eliminated through the strikeout.

Ryosuke Kikuchi connects, but there is a double play for Japan; he is controlled just like Yuki Yanagita. Hideto Asamura goes to third base.

Hideto Asamura is walked to first after a walk.

Double kill for the United States; Bubba Starling is eliminated along with Mark Kolozsvary after a shot to shortstop.

Eric Filia connects with a double after a fly to center field.

Seiya Suzuki is content from third to first base. Finish the first inning of the game; everything remains even.

Triston Casas is also eliminated through the strikeout, thus ending the first round for the United States.

Jamie WestBrook and Eddy Álvarez are the first outs for Mexico and the game.

Masahira Tanaka, from Japan, on a mound; Jaimie Estrbook, from the United States, at bat.

In a few moments we will share with you the starting lineups of the USA vs Japan live, in addition to the most recent information that arises from the Yokohama Stadium. Do not miss details of the game with the minute by minute and live online from VAVEL.

How did the United States and Japan fare in their last game?

Early Saturday morning, in his most recent game of the tournament, Japan beat Mexico 7-4, while United States defeated South Korea 4-2.

United States, to go to the semifinals

How did the United States and Japan qualify for Phase 2?

Baseball returned to the Olympics

What is the format of the Baseball tournament in Tokyo 2020?

Good morning to all VAVEL readers!