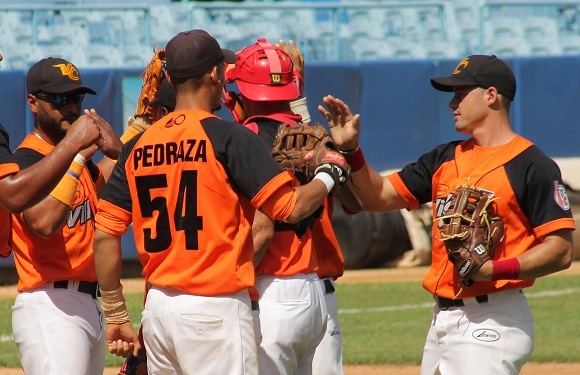 The Villa Clara Sugar Producers continued grinding in this National Series number 61 by achieving their eighth consecutive victory this afternoon, in a day where most of the challenges were fought until the last moment.

The defeat of the Crocodiles from Matanzas, leaders of the championship, narrowed the standings again, amid tough battles where a grout was signed, two teams were left lying on the field, and two games had to be decided in an extra inning.

A grounder to second base by Ariel Pestano Jr. was all that the Azucareros needed to leave the Indios Guantanameros stretched out on the field with a final score of 5-4, and continue linking their string of successes, the greatest this season.

It was crazy what happened this afternoon at the Augusto César Sandino in the orange city, when “Wizard” Pedro Jova’s troop came from behind in the eighth with a three-run rally, and then finished downing the disappointing pachyderms an inning later.

Magdiel Gomez went 3-for-5, Reidel Pedraza 2-for-4 with an RBI, and Pestano Jr., who did not start as a regular, was hitless but brought in two runners to the plate.

Pedro Manuel Castillo pitched two immaculate innings and got the win, while Yeudis Reyes conceded the loss after bowling five opponents and allowing the same number of hits with four earned runs, in just two innings.

for the Indians, Pedro Pablo Revilla (3-2) hit his eighth full-lap shot to drive in two runs and match the leaders in that department, and Luis Ángel Sánchez went 3-for-4 with a double included and an RBI.

With a package of five touchdowns in extra innings, the Alazanes de Granma won 9-4 against the Crocodiles from Matanzas in their own courtyard of the Victoria de Girónto stay hovering near the line that defines the qualifying zone.

Once again Alexquemer Sánchez was the big man on offense for the reigning national champions as he went 5-4 with a double and home run included, in addition to driving in a total of four runs. Darién Garcia and Osvaldo Abreu connected hits RBIs.

The note of the day was given by pitcher Carlos Santana, who, in addition to winning the game by throwing three immaculate innings, had to take up the bat because his team lost the designated hitter, and hit tubey to drive in a couple of runs.

The speed Carlos Brayan Álvarez left through the narrow door of the stadium by tolerating four annotations (two dirty) in the 1.2 chapters that remained on the mound.

For the Yumurinos, Yadir Dreke (5-2) took the fences with clean bases, Jefferson Delgado went 5-3, and Erisbel Arruebarrena hit a pinch-hit to drive in two runs.

The Mayabeque Hurricanes came from behind on the scoreboard against their Nelson Fernández fans, to beat the Holguin Cubs 7-5 and stay in second place in the tournament.

A double by Yasniel González (3-2) brought two teammates to the plate in the eighth inning for the game’s final lead. Denis Laza also drove in two with a pair of homers in three at-bats, and Luis Fernández went 3-for-3 with an RBI.

Mailon Cruz made a long relay of 6.2 chapters where he allowed a single run and left the winner, and Marlon Vega saved the game giving a zero in the last inning with two strikeouts included.

The setback went to the account of Wilson Paredes, after working three innings where he was stepped on home-plate four times.

A home run with the full sacks of Yoelquis Guibert in the tenth episode, gave them the victory of the Avispas de Santiago against the Elefantes de Cienfuegos 8-5, to maintain third place in the standings.

The emerging Denis Alá also moved the wood for the untamed with a double that brought home two teammates, Erick Marlon Serrano with a pair of singles in four at-bats, and Francisco Martínez with a bi-angular that drove in a run.

Alberto Bicet had a good start with only one accepted run in seven innings of work, but left without a decision, and success was taken by Yoandry Montero by not tolerating clean in 2.1 labor chapters.

The rookie Maikel Borrell was the loser of the game, in a long relay of four innings where he scored six runs, two of them dirty to their records.

For the Elephants, Richel López hit a double and a solo home run six times at bat.

With another pitching dissertation by Juan Sebastián Contreras, the Camagüeyan Bulls achieved victory at the expense of the Vegueros de Pinar del Río in the same Capitan San Luis, with a final score of 3-0.

It was the fifth success of the campaign for the 22-year-old, who was selected last week’s Player of the Week by unanimous decision and with a record popular vote.

This afternoon he barely allowed a couple of hits in seven innings with six strikeouts, to become the leader in that department with 34 and lower his earned run average to 2.00. Carlos Alberto Pedroso retired the five rivals he faced and scored the save.

Yordanis Samón hit a home run with empty pillows (his number 199 in the National Series) and Yosbel Pérez went 2-3 with an RBI.

For the Vegueros, Tony Guerra hit a tubey in three visits to the plate.

Henry Llorente hit for a hit and the Hunters of Artemisa left the Lumberjacks of Las Tunas lying on the grass 7-6 to extend their winning streak to six matches and gain a foothold in the qualifying zone.

A rocket from captain Dayán Garcia (4-2) brought home the tie when picking up bats and balls and Llorente (5-3) towed the other (his second of the game) to lower the curtains on the baseball function . All against reliever Yosbel Alarcón, who suffered his fourth loss of the season.

In the party of 13 hits, Carlos de la Tejera hit three in five at-bats and remained the leader of the batters, now with an average of 429.

José Ángel Garcia pitched an inning where he gave up two hits and walked for a couple of unearned runs, but got his first win of the championship.

For the Lumberjacks, Yosvani Alarcón went 2-4 with an RBI, and Eduardo García sounded a tubey four times to push a teammate for the rubber.

Finally, The Roosters did not sing this morning, at least in the capital, after leaving the Latin American arena plucked on Tuesday nightvictims of the claws of the feline industrialists, who broke an adverse streak of four games by defeating them with a final score of 9-1.

Guillermo Carmona’s troops had barely achieved a victory in their last seven fights in the Coloso del Cerro, but this time they closed ranks behind their trenches, and with an artillery of 10 rockets they fulfilled the mission of the day to stay within the area of classification.

The blue starter Pavel Hernández stayed on top of the mound for six episodes struggling with his lack of control by granting seven walks, but he knew how to fill his lungs with air to blow and put out the fire on the field, thanks to five prescribed strikeouts since he allowed just two hits from some rivals who are the most batters in the championship.

Meanwhile, Yasiel Santoya and Roberto Acevedo became a nightmare for mentor Eriel Sánchez, giving his team an early lead that was enough to win.

Santoya, that classic wedge of wood, had a two-run RBI hit in the same first inning and another one in the third that brought home one.and Acevedo hit a pair of sacrifice flies, drove in one in the eighth, and hit a throw to the plate to complete a game-changing double play.

Alberto Calderón was another one who moved the wood for the people of the capital by hitting three hits in four opportunities, including a double and a triple.

The rest was taken care of by the right-handed Elder Nodal, throwing the last third of the game without allowing freedoms to earn his first save of the campaign.

The defeat went to the account of the starter José Eduardo Santos by supporting six clean notations in four performance innings.

for the visitors, the great Frederich Cepeda went 1-2 with a double included and two walks received.

The match between Ciego de Ávila and La Isla could not be held due to transportation problems and this Wednesday they will play a doubleheader starting at 10:00 am. 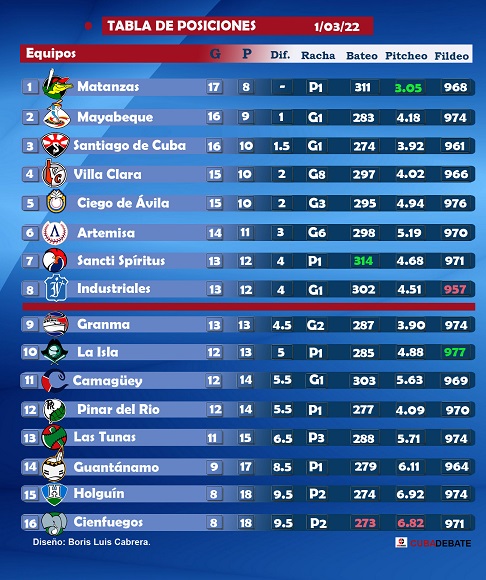 SNB 61: Villa Clara is still on a roll