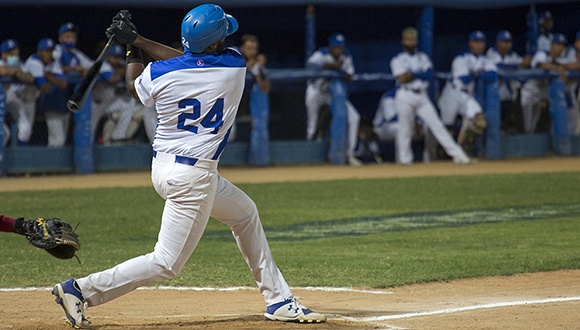 In a day where two night games were played for the first time in the season, the teams that lead the championship slipped in their respective duels, to make the standings red hot.

“Anything like in a pharmacy” there was this Tuesday night on the grass of the legendary stadium. Too many bases on balls, errors that cost careers, protests, expulsion of both directors, controversial arbitration decisions, and constant losses of electricity in the lighting towers, a destabilizing element for pitchers, both physical and psychological.

Two Lions who a few months ago left Crocodile skin in the swamp, put music to the night of the capital in the same first episode with two home runs that both found a runner on a pad.

First Sandy Menocal shook the stands taking the fences of the left field, and then Yasiel Santoya imitated him to turn the Coloso del Cerro into an insane asylum, overflowing with the largest turnout of the season.

The defense of the blues (the worst in the championship) complicated the existence of starter Pedro Álvarez, who went to the bench after completing five innings with three runs on his account, but all of them were made thanks to errors on the field of his troop.

The party continued between rival congas for the rest of the night with skirmishes by both sides. The visitors managed to take the lead in the “lucky seven” but a bunch of five runs by the felines in that same inning tipped the final balance.

Among a parade of 11 pitchers for both teams, the victory went to reliever Andy Vargas after working 2.1 innings with two runs allowed, and the loss fell to the speedy Armando Dueñas, accepting two runs in two-thirds of an inning.

For the blues, in addition to Menocal (3-1, 3CI) and Santoya (5-2, 2CI), Andrés Hernández stood out with a single in four innings to bring two home.

For the Yumurinos, Aníbal Medina and Ariel Sánchez each scored singles and doubles, the latter with two RBIs on his own, and Jefefrson Delgado also brought two teammates to the plate with a hit in four opportunities.

The Roosters of Sancti Spíritus were not dazzled by the lights on their fence at José Antonio Huelga and pecked at the Avispas from Santiago until they defeated them 4-0, in their first night of combat this season.

José Eduardo Santos stayed in the box for 7.1 innings disseminating five hits with three prescribed strikeouts and won his second match of the year, while Yankiel Mauri threw the rest without allowing freedoms to ensure victory.

The experienced Yunier Mendoza hit a pair of hits in four visits to the batter’s box, one of them a double, and drove in two runs, and Rodoleisi Moreno went perfect 3-for-3 with an RBI.

Alberto Bicet left through the narrow door of the stadium by tolerating all the entries of his rivals (one dirty) in his seven innings, where he allowed nine hits and granted four walks, three of them intentionally.

For the untamed, Yoelkis Guibert was the only hitter I was able to get a couple of hits.

In the Cristóbal Labra the Pirates of the Island fought amid strong hurricane winds and managed to defeat the invaders of Mayabeque 5-2, to break a winning streak of three games and get out of the bad moment they lived in their territory at the end of last week.

Veteran Wilber Pérez with 45 years in the ribs dominated the impetuous visitors at will, not allowing clean touchdowns in seven innings while striking out five, to win his third challenge of the season.

Kendry Hernández bowled four rivals and gave up a run in two innings of work and earned the save, and José Ignacio Bermúdez conceded the setback in a one-inning outing where he was scored twice with the same number of hits allowed and three passages from free transit granted.

Luis Felipe Rivera, another 44-year-old veteran, went 3-for-4 with two RBIs, while captain Dainier Gálvez drove in as many teammates with a double in four at-bats.

For the Hurricanes, Orlando Lavandera (5-1) and Rangel Ramos (2-1) connected tubeyes, and Yasniel González drove in a run for the rubber.

The Hunters of Artemisa also came out of a lethargy where they suffered three losses in a row and won 9-4 against the Elefantes de Cienfuegos, to the joy of their faithful gathered on July 26.

Osbel Pacheco (3-1) and José Antonio Jiménez (4-2) hit doubles and drove in a trio of runs each, Dayán Garcia went 3-for-4, and Carlos de la Tejera singled and tripled in four visits the dish.

Yuniesky Garcia had four hits to maintain his undefeated streak, in a six-inning effort where he struck out the same number of opponents, gave away four walks, and allowed three clean runs.

The defeat fell again on the shoulders of Yasmani Insua, who could barely get an out in an opening where he hit two pitches, gave up a base on balls, allowed a hit, and scored a couple of runs, to see how his effectiveness rose. at 5.48 earned per game.

The Villa Clara Sugar Producers entered the qualifying zone by beating the Vegueros de Pinar del Río this afternoon in their own courtyard of Capitan San Luis, with a final score of 5-4.

Javier Mirabal pitched 5.1 innings with four runs to his records, two of them unearned, and came out the winner, helped by young Randy Cueto, who struck out six opponents in 3.2 scoreless innings.

Yaifredo Domínguez allowed home plate to be stepped on four times, once because of an ivory, and suffered the loss after working four innings.

For the Vegueros, Tony Guerra took all the credit by going 3-4 with a double and a home run included and a couple of shots for the rubber.

A rocket to the center of Osvaldo Abreu after an error by the rival defense, gave him the advantage that his Alazanes de Granma needed in the eighth chapter, to beat the Toros Camagüeyanos 6-5 and be able to stay among the top eight in the championship.

Abreu went 5-3 in the match, and Guillermo Avilés and Iván Prieto 4-2 each, the latter with two RBIs to his records.

Kelbis Rodriguez relieved for three innings with only one earned run allowed and got the win, while Lisander Hernandez suffered the setback by allowing an unearned run in three innings.

Five batters from the Toros scored a couple of hits in the fight, including Alexander Ayala and Jorge Cardoza, who also got a tubey per capita.

The Leñadores de las Tunas clung to the right arm of Carlos Juan Viera, to win their fourth game in a row, this time 6-0 against the Cachorros from Holguin, to the delight of the thousands of fans gathered at the Julio Antonio Mella.

The right-hander from Jobabo walked the entire route (something that does not happen in any league in the world) at the rate of seven strikeouts and six hits to achieve his second win of the contest.

Yosvani Alarcón singled and doubled five times at bat to drive in a pair of runs, and Andrés de la Cruz went 2-for-3 with an RBI.

The setback was for starter José Antonio Sánchez, after spending three chapters in the box where he gave away five walks (one intentional) and accepted a trio of runs.

For the Cubs, Ihuner Anache’s striker stood out with three hits in four opportunities, one of them a double.

Lastly, Yander Guevara stood out on the mound and the Tigres de Ciego de Ávila repelled the attack of the Guantanamo Indians in their territory of José Ramón Cepero, to beat them 4-0, in a challenge where both teams left 23 runners in the pads.

The so-called “lion tamer” pitched 7.2 innings, finishing off six opponents the bitter way to reach five successes this season and become the new leader of that department.

Alfredo Fádraga (4-3) brought two teammates home, and Abdel Civil (2-2) and Héctor Ariel Labrada (3-1) drove in the other two, the latter with a brace.

Enyer Fernández, a 20-year-old left-hander with great potential to prevail in this sport, took the loss in a 4.2-inning effort, where he gave away five walks, withstood seven hits, and accepted all the runs from his opponents, two of them dirty.

For the eastern tribe, Eulogio Marcilli was the only one who could score a pair of singles. 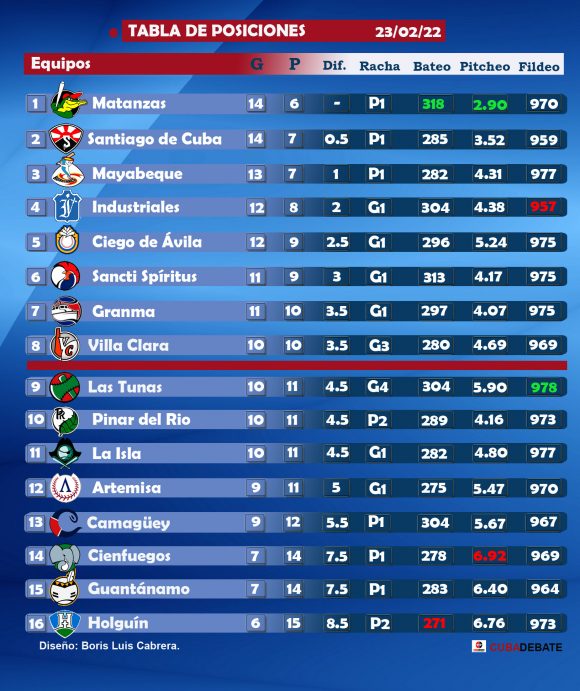 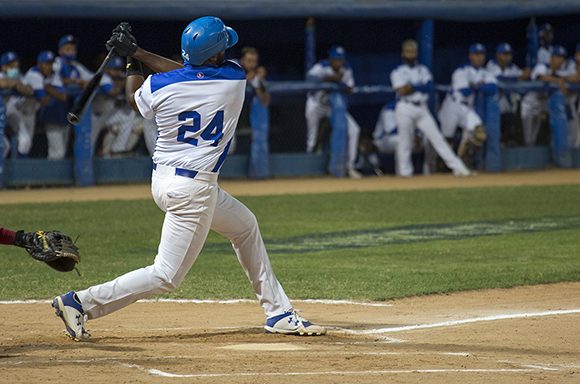 Yasiel Santoya, one of the home runs of the night. Photo: Irene Pérez/ Cubadebate. 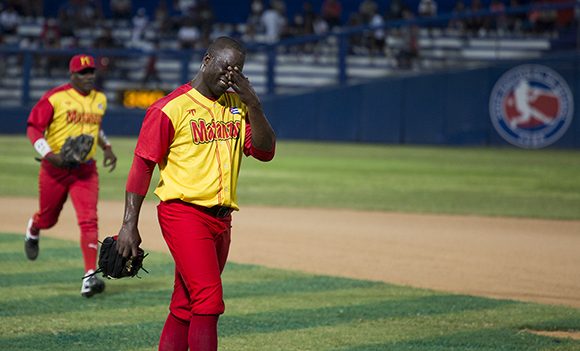 Noervys Entenza was unable to complete the fifth inning in a start where he allowed six earned runs. Photo: Irene Pérez/ Cubadebate. 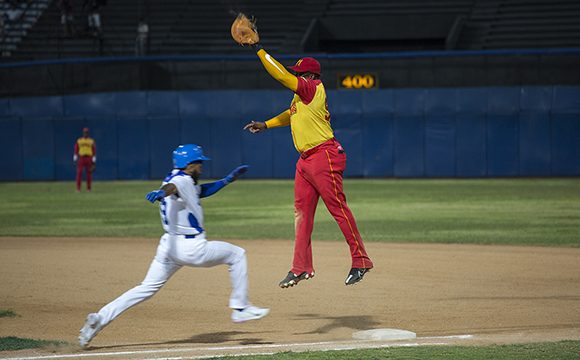 The Latin American stadium hosted the best crowd of the season to support Industriales, who are fourth in the standings. Photo: Irene Pérez/ Cubadebate. 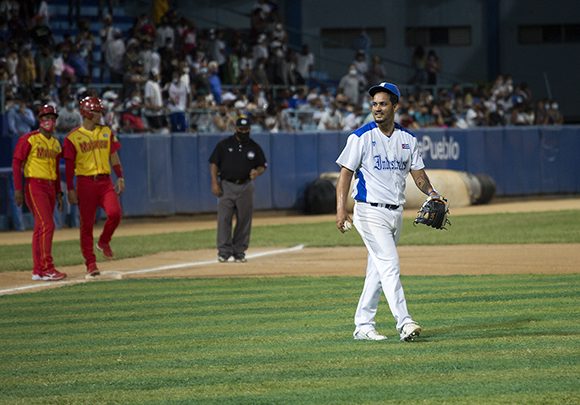 Pedro Álvarez went to the bench after completing five innings with three runs to his account. Photo: Irene Pérez/ Cubadebate. 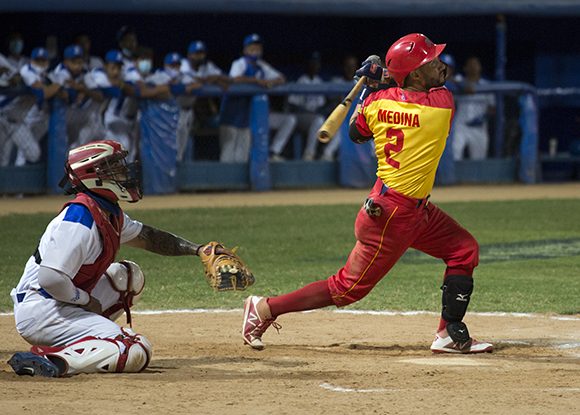 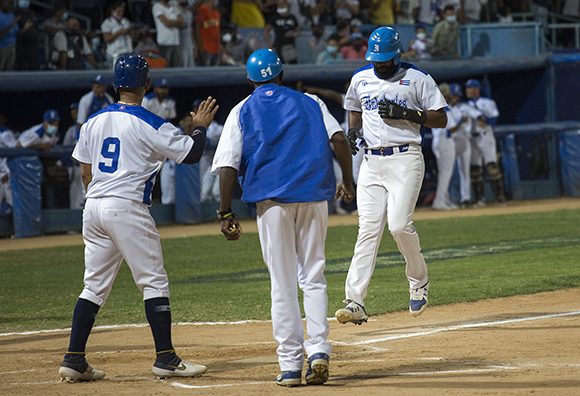 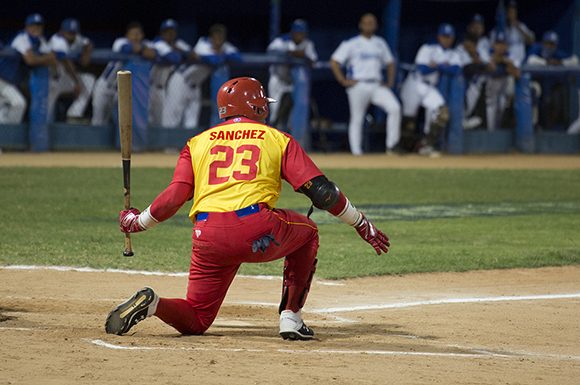 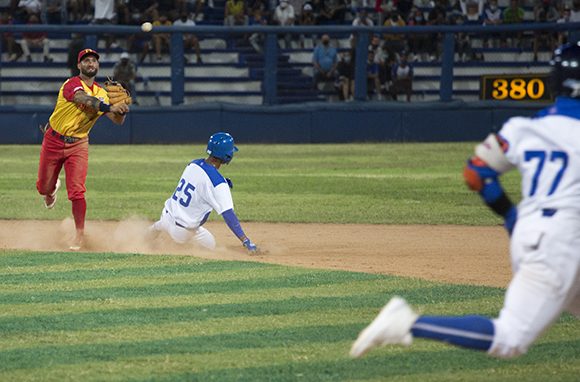 The game had constant moments of tension, and even the mentors of the two teams were expelled. Photo: Irene Pérez/ Cubadebate. 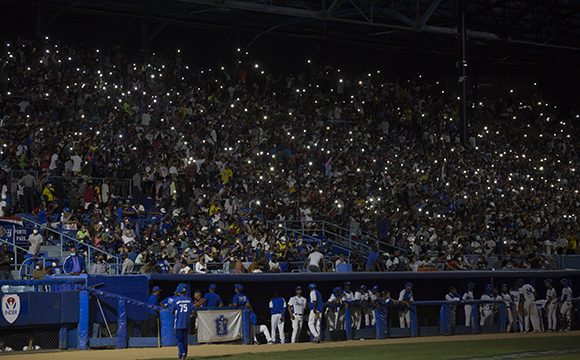 In a match of ups and downs, including four stoppages due to electrical problems, Industriales outscored Matanzas 11-7. Photo: Irene Pérez/ Cubadebate.

SNB 61: The night reaped the leaders