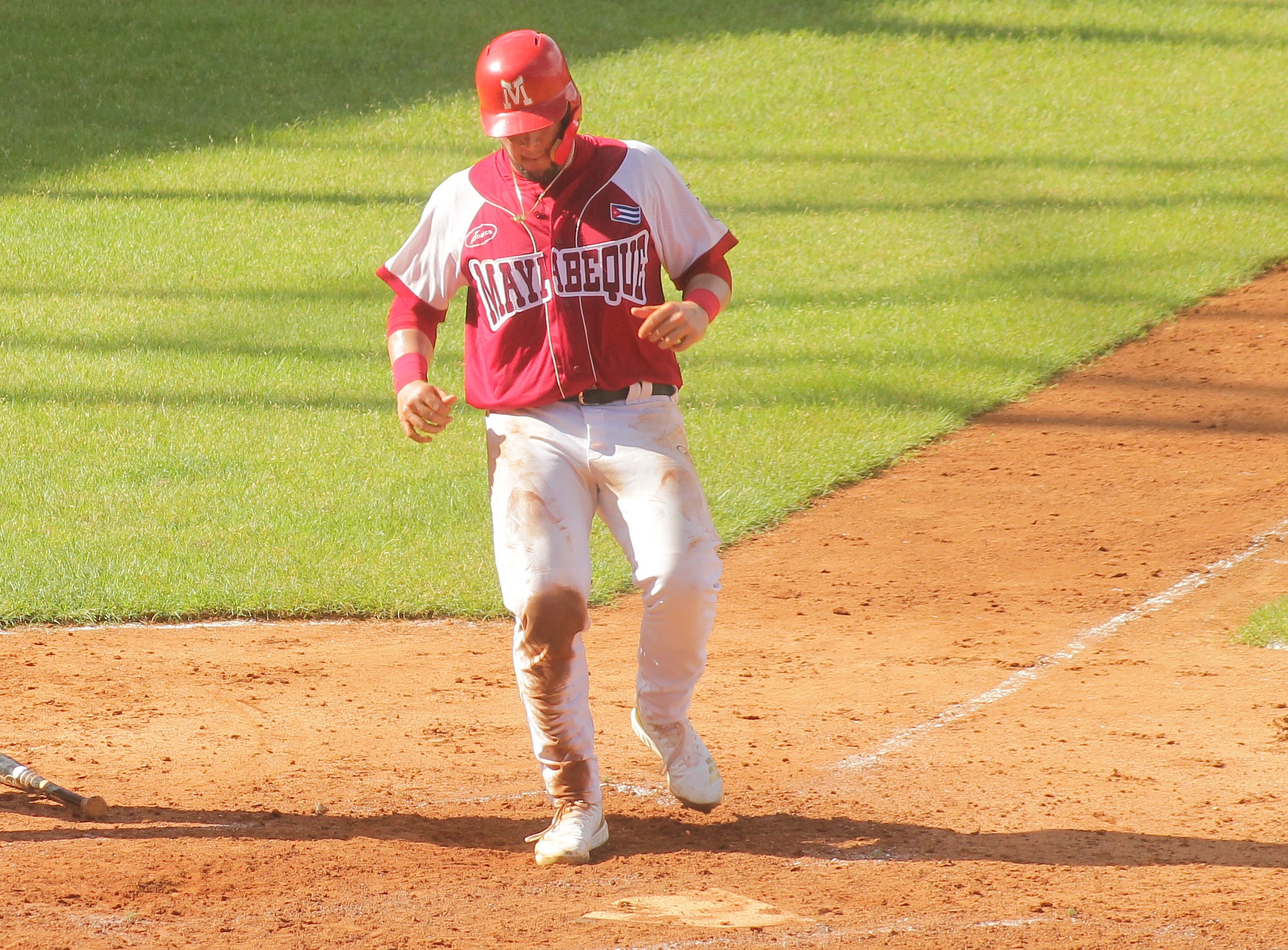 Mayabeque clings to the throne of the National series with six wins in seven starts Photo: Boris Luis Cabrera/Cubadebate

In a day where a couple of grouts were given and a knockout was signed, the Mayabeque Hurricanes continued stationary at the top of this National Series number 61 by getting their sixth win in seven appearances.

Michael González’s boys continued to blow hard against predictions and Tigres avileños and closed the plate doors for nine innings to leave Yorelvis Charles’ felines out in the open and beat them 3-0 to dominate the sub-series between them.

The three runs of the challenge were brought home by designated Juan Carlos Hernández with a home run in the sixth inning that found two teammates on the pillows, to spoil the work that starter Fernando Betanzo, loser of the game, had been doing.

Yulián Quintana pitched 5.1 with only one hit allowed but left without a decision, and the success went to reliever Marlon Vega as he walked 3.2 innings without complications.

Of the three hits for the Tigers, two were from waiter Raúl González, one of them from two bases.

The experienced Alberto Bicet did not tolerate liberties in seven episodes, and the Avispas de Santiago de Cuba took the particular fight in hostile lands by outwitting the Cazadores de Artemisa 6-1, to stay very close to the top of the championship.

The 38-year-old pitcher from Palma Soriano only conceded a walk in all that way while he liquidated four by the bitter way, and achieved his second victory of the young campaign. Luis Fonseca got the last four outs striking out three opponents and saved his fourth game of the contest, leader in that department.

Rudens Sánchez went 2-for-4 with a two-run homer included, Yaicel Pérez singled and paired homers with an RBI, and Yoelquis Guibert had two RBIs with a hit in three at-bats.

Geonel Gutiérrez struck out seven opponents in as many innings, gave up three intentional walks, and allowed four runs in seven innings to carry the setback.

Carlos de la Tejera was the only one for the defeated who managed to score a couple of indisputable, and also pushed the only race of his troop.

In a challenge that began in the morning, William Saavedra hit a sacrifice fly at the end of the tenth inning, and the Vegueros de Pinar del Rio beat the Indios Guantanameros 9-8, to reach five wins in the campaign and take the private duel.

The eastern tribe could not maintain a six-race lead and stood motionless while the cigar workers burned all their huts one by one, until they were left lying in the sun on the grass of Capitan San Luis.

Yaser Julio González and Saavedra continued to pull the greenlegs’ car. The former hit three singles and a double this time in four at-bats and drove in one to lead his team’s batters with 441 Ave, while the other brought home four with two singles in five plate appearances to raise his offensive average to 440 Ave and reach seven RBIs to lead the team.

Vladimir Baños was punished in his start by giving up seven earned runs in 4 1/3 innings, but the bull-pen responded and stopped the visitors in their tracks. Frank Luis Medina pitched the last 2.1 innings and got the win.

The defeat went to the account of Frank Navarro after working for 3.1 chapters where he hit seven hits and scored four runs, one of them dirty.

For the losers, Yasmani Velázquez went 2-4 with a triple included and a couple of RBIs, and Pedro Pablo Revilla singled and doubled in four at-bats with an RBI.

Between both sets they left 25 runners cold on the pads throughout the match.

Rookie Dorvis Navarro pitched the game of his life and Piratas de la Isla won their fifth game in a row to sweep Alazanes de Granma at their Cristóbal Labra headquarters, this time with a close score of 1-0.

The 20-year-old left-hander only allowed a single in seven innings and scored his first win in the National Series, to dominate the current national champions at will, who could barely score a run in the three games they played for those infested lands of filibusters.

The 19-year-old Kendry Hernández, was in charge of closing the last two episodes by withdrawing the six rivals he faced, and scored his second save of the contest.

The only score of the game was pushed by Leonerdo Uegellés (3-0) closing the second third of the match. Aquimio Jiménez went 2-for-4 and José Luis Bring doubled in four plate appearances.

Cesar Garcia gave up five walks and allowed six hits, but gave up just one run, enough to take the loss.

The Leñadores de las Tunas unleashed a cruel offensive of 15 hits to defeat the Azucareros de Villa Clara for the first time in three days, this time with a final score of 10-7, and save the honor of the lawsuit between the two.

Danel Castro (4-3) took the fences for the third time in the tournament (number 232 of his career), Rafael Viñales hit a pair of doubles and a home run with two RBIs, Yudier Rondón also disappeared the ball to drive in three, and Eduardo Garcia went 3-for-5 with a double included and an RBI.

Alberto Pablo Civil made a long relief of four chapters where he accepted a couple of annotations to come out with flying colors, and Yosbel Alarcón scored the save by throwing a tackle at a cool pace.

For the oranges, Yurién Vizcaíno went 2-for-3 with a home run and three RBIs, and Yuri Marcos Fernández went 3-for-5 with a double included and an RBI.

A rocket from Luis Vicente Mateo that rolled deep into the outfield gave the Elefantes de Cienfuegos victory in the 12th inning against the Toros Camagüeyanos 5-4, to complete a sweep that drove the stands crazy on September 5.

Orlando Santos was hot with the wood, going 4-for-6 with an RBI, and Pavel Quesada (4-1) hit a double, his team’s only extra-base hit in the match.

Hermes González had a complete nine-inning outing without allowing any earned runs while striking out seven opponents, but left without a decision. Success went to the archives for Alex Daniel Pérez, as he worked through three innings where he allowed two unearned touchdowns thanks to the IBAF rule.

Camagüey’s starter José Ramón Rodriguez also had an excellent start by accepting only one clean in six innings, but the setback was suffered by Lisander Hernández by tolerating three annotations, among them those that defined the match.

Luis Antonio González (6-2) hit a two-run homer for the losers, and Jorge Cardoza had an RBI hit while pinch-hitting.

Wounded in their pride, Guillermo Carmona’s Lions came out this Thursday night to the arena of the Latin American, and they did not stop until they chased away the Holguin Cubs “clean stick”, to take the victory by knockout 19-8 in seven episodes and tilt the balance in his favor of the particular duel.

Faced with the largest turnout of the season with more than 21 thousand souls in the stands and as many wandering around the outskirts of the stadium, the Industriales took out their blue cannons and bombarded the visitors from the very first episode to mark their territory early and achieve his fourth win in seven starts in this National Series.

A pair of full-lap shots shook Andrés Hernández to turn the Coloso del Cerro into an insane asylum and on both occasions he found two teammates on the pads, to reach 11 RBIs in the championship.

At the Los Maderos party in the capital, where a parade of seven rival pitchers gave away a total of 12 free transit tickets, Yosvani Peñalver also stood out, 4-2 with a trio of RBIs, and Lázaro Ponce, also 4-2, but with two RBIs for home plate.

The pack of “Tico” Hernández defended themselves as best they could and also moved the bats with 12 hits and eight runs, to sign the highest run made in a game by two teams so far in the contest.

Maikel Cáceres and Yordan Manduley each singled and doubled, with the latter bringing in three runs for the plate, while 20-year-old rookie Víctor Paz homered in the first at-bat of his National Series career.

Erick Cristian González endured five earned runs but managed to complete his five innings to earn his first success of the year and the second of his sports career, while Andy Vargas pitched the rest of the game with two strikeouts to secure the victory.

The defeat fell on the shoulders of starter Emmanuel Chapman, in an opening where he barely managed to get an out and five runs were scored, one of them dirty.

The match between the Crocodiles of Matanzas and the Gallos de Sancti Spíritus was suspended due to several baseball players from Sancti Spiritus giving a positive antigen test, according to the National Baseball Commission on its Twitter account. 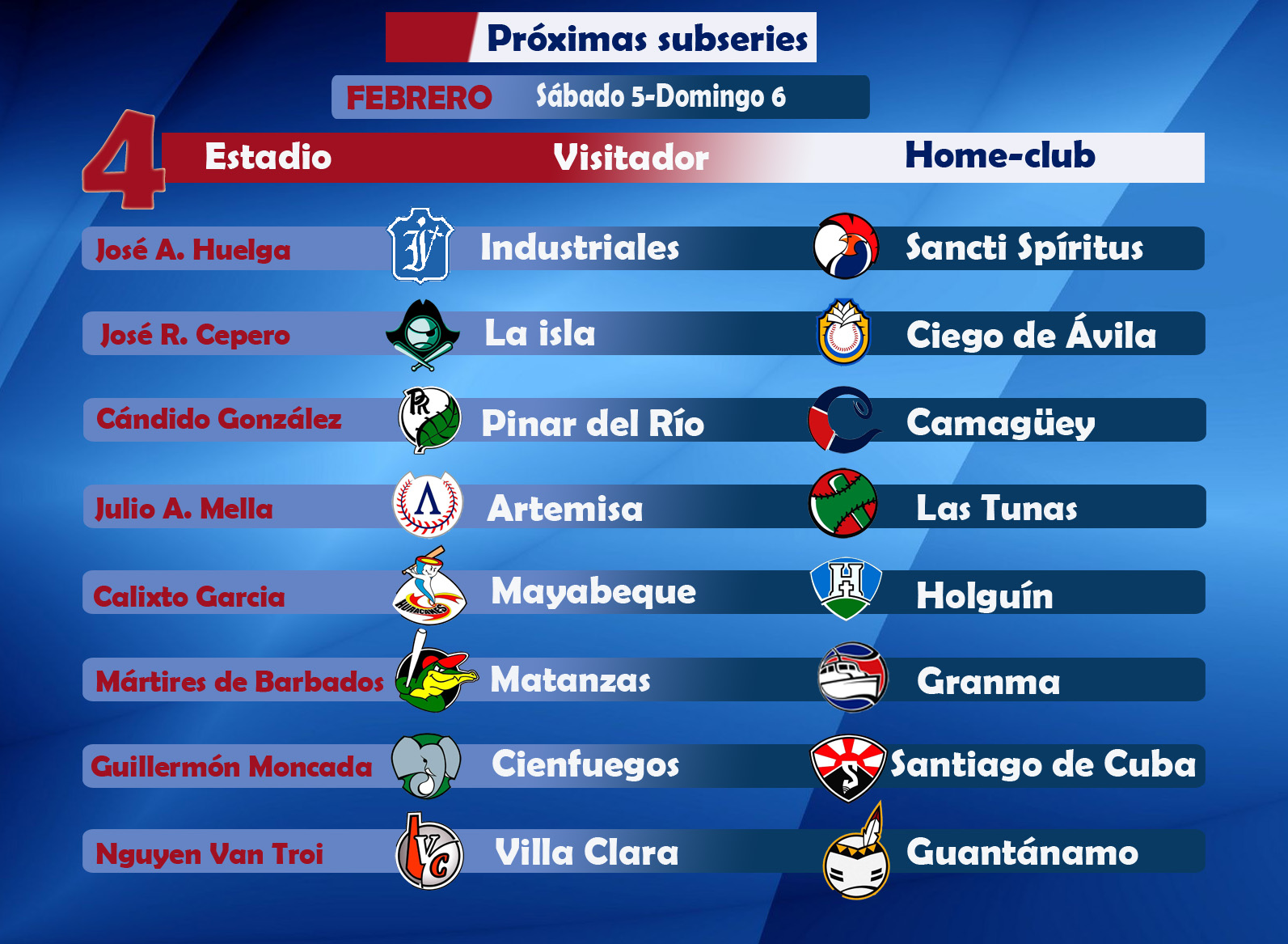