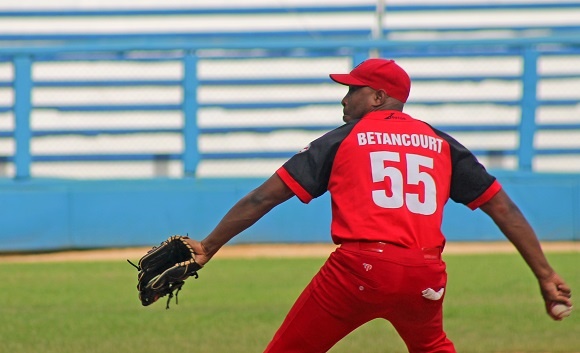 On a quiet day where there were no major offensive attacks and a couple of slurries were delivered, the Wasps of Santiago de Cuba took advantage of the calm of the hurricane-force winds of Mayabeque and stormed the top of this National Series number 61.

Eriberto Rosales’ troops leaned on the right arm of Danny Betancourt, to topple the Elefantes de Cienfuegos 5-0 before more than 20,000 fans present in the “pressure cooker” of Guillermón Moncada.

The 22-year veteran continued to show he has gas in the tank, going 6.2 innings without allowing a score.s to achieve his second success in as many outings and scare away unbelievers.

The 40-year-old native of Songo la Maya thus completed 12.2 scoreless innings in this contest, to achieve victory number 148 of his career.

Captain Adriel Labrada hit a homer with full sacks closing the first third of the duel to sentence the clash early and drive the eastern stands wild, with Nelson Batista also missing the ball to round out the afternoon’s production.

Luis Alejandro Serpa could not complete the third inning in his start and went to the dugout with four runs on his record and his second championship loss.

Richel López was the best hitter for the losers as he singled and doubled in four plate appearances.

In the Calixto Garcia the Holguín Cubs did not believe in violent hurricanes and stopped the Mayabeque boys in their tracks by whitewashing them 3-0, to bring them down from the top of the leaderboard.

Yasiel González (4-1) took the fences alone and Maikel Cáceres went 1-3 with a pair of RBIs.

Luis Ángel Gómez excelled on the mound by allowing just three hits in seven full innings with only one walk and three strikeouts.to earn his first win of the year, and Yadián Martínez opened the losing streak by allowing two runs in 6.2 innings.

The right-hander Yusmel Velázquez was in charge of closing the match by launching the last two chapters, withdrawing all the rivals that he faced with two strikeouts given, to score the save.

The Roosters from Sancti Spiritus opened their fence at José Antonio Huelga after five consecutive defeats, and ambushed the Leones from the capital with a final score of 7-2in a match where the blues committed six ivories to reaffirm themselves as the most erratic in the championship.

Carlos Gómez (4-3) drove in a couple of runs in the same first episode against the shipments of right-hander Marcos Fonseca, in a bad omen for the visitors before a crowd hungry for victories.

Fonseca allowed two more closing the first third of the game brought home by Alberto Rodriguez (3-1), enough to carry the setback in a day where his troop produced 11 hitsbut he was barely able to produce a couple of touchdowns.

These came as early as in the second inning to match the actions at that time, when they linked four consecutive hits, including two RBIs from Oscar Valdés and Sandy Menocal, who made starter Yuen Socarrás stumble on the mound.

However, the 34-year-old right-hander and 17 National Series, composed himself and walked a route of 6.1 innings handing out four strikeouts, to achieve his first victory of the campaign, the 78th of his career, and the 92nd achieved by Sancti Spiritus for life against Industriales against 119 setbacks.

Two more runs in the seventh at the count of Remberto Barreto (one dirty) and one more in the eighth due to a solo shot by substitute Mosés Esquerré against the youngster Fher Cejas, ended up closing the cell where this Saturday the Lions would fall knocked down for the fourth time in the contest.

The Lumberjacks of Las Tunas continued to take a breather and climbed positions by beating the Hunters of Artemisa 7-3to reward his loyal fans gathered in Julio Antonio Mella Park.

A four-run run in the second inning was enough for rotation ace Carlos Juan Viera, who allowed three in a seven-inning stretch while striking out six opponents to earn his first victory of the fight. Yosbel Alarcón helped him by keeping home-plate doors closed for the remaining two innings and saved the game.

Lefty Misael Villa lasted 6.2 innings allowing 10 hits and six runs (one unearned), and left through the narrow gate of the stadium.

Yosvani Alarcón and Rafael Viñales homered with empty padsand Andrés Quiala (4-3) and Yudier Rondón (3-1, 2b), drove in a couple of runs each.

For the Hunters, Dayán Garcia shone again with a two-run double in four at-bats.

The Tigres de Ciego de Ávila took the Piratas de la Isla down a peg at the José Ramón Cepero and defeated them 7-3 to break a winning streak of five games in a row.

Osvaldo Vázquez was intractable this afternoon as he went 3-for-3 with tubey and a home run included and a couple of RBIs, Rubén Valdés brought two with a single in three opportunities, and Liosvany Pérez drove another with an indisputable in two official at-bats.

Yander Guevara pitched 7.1 innings with two earned on his account to reach three hits and become the king of wins in this contestand left-hander Yunier Gamboa suffered the setback of not being supported by his defense by accepting five runs, three of them unearned, in a four-inning opening.

For the Pirates, Eliseo Rojas hit a tugboat four times at batand Jhony Hardy went 2-for-4 with a double included.

The Camagüeyan Toros unleashed an offensive of 16 hits to break a five-game losing streak, beating the combative Vegueros de Pinar del Río 7-5 who scored four of those runs in the final third of the game.

Leslie Anderson was the big man in the attack with a double and a home run and four hits for the plate, while Alexander Ayala, Yordanis Samón, and Leonel Moa each had three hits, the last two including tubeyes.

Frank Madan debuted very well working five blank episodes with only two allowed, but he left without a decision and Ángel Luis Márquez endured six hits and three clean ones in just two innings of work, and due to things with the ball he took the victory. Javier del Pino got three outs and scored the save.

Right-hander Yosvani Torres also walked out without a decision after walking five innings with three runs to his records.and the defeat was charged by Leodan Reyes by accepting a goal in a work entry.

For the most western Juan Carlos Arencibia (5-3) disappeared the ball and towed twoRodiel Martínez also had three singles in five at-bats, William Saavedra went 1-for-3 with an RBI, and news: Yaser Julio González went hitless for the first time in this contest.

Lastly, the Indios de Guantánamo barricaded themselves in the Nguyen Van Troi stadium to beat the Villa Clara Sugar Producers 9-5.supported by the strength of his tribe that managed to get three balls beyond the limits of the field.

The home runs were Pedro Pablo Revilla (5-1), Luis Ángel Sánchez (4-2), and Over Cremet (3-1), these last two to drive in a couple of runs. Robert Luis Delgado also burned the bat by hitting a single and a couple of tubes in four at-bats and driving in a teammate for rubber.

Starter Enter Fernández allowed eight hits and three earned runs in two thirds of the game to come out on topand Alain Sánchez lost the match after being bombarded with six touchdowns in just 2.1 innings of work.

Yeniet Pérez stood out for the visitors by going 3-for-5 with a home run and two RBIs.

The match between Matanzas and Granma did not take place because it had already been played on the opening day. 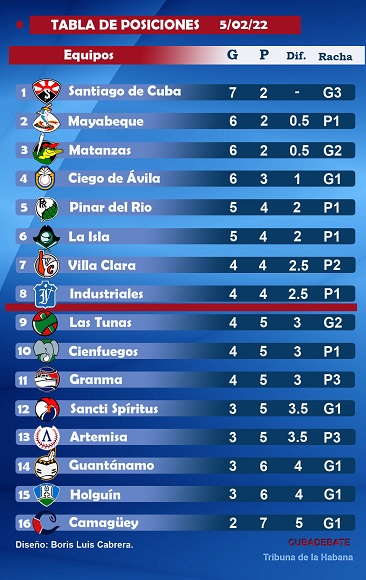