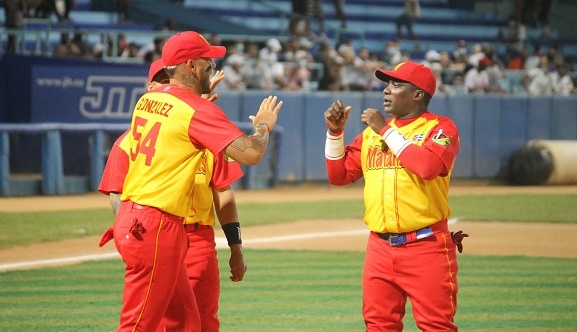 Ariel Sánchez went 3-for-4 with a double and an RBI in the Crocodiles’ win. Photo: Boris Luis Cabrera/ Cubadebate.

The Cazadores de Artemisa and the Azucareros de Villa Clara swept their respective rivals, in a day where the first three teams located in the standings achieved victories.

Luis Arturo Castro’s troops passed the broom to some disappointing Elefantes from Cienfuegos, defeating them this afternoon with a final score of 7-4, despite leaving 11 runners on base throughout the match.

Henry Llorente (3-1) and Osbel Pacheco (4-1) each drove in a pair of runs, the latter with a double, while José Antonio Jiménez (4-1) and pinch-hitter Gabriel Garbey (1-1) brought one per capita.

Israel Sánchez pitched an immaculate inning to take the victory, and José Ángel Garcia retired the three opponents he faced to save his fifth game and the 278th of his sports career, the undisputed leader in that department.

José Andrés Córdova had a terrible start by enduring four runs in just two-thirds of the inning but he left without a decision, and baseball things, Pedro Mesa with an effective relief of 5.1 innings where he was barely scored once, was defeated.

For the southerners, Asiel Rodriguez was the big man on offense with a perfect 3-3 afternoon with a double included and a couple of RBIs.

A massacre was what the Azucareros did in Capitan San Luis by shaking hard the Vegueros de Pinar del Rio 14-1, to sweep them mercilessly before the eyes of their fans and extend their string of consecutive wins to five.

A cruel bombardment of 18 undisputed Pedro Jova’s disciples unleashed on enemy soil. Yurién Vizcaíno (3-2) took advantage of the party and the ball disappeared for the seventh time in the campaign to drive in three runs, Julio Enrique Miranda (4-1) also took the fences to drive in two, Juan Carlos López drove in four with the same amount undisputed, including two tubeyes, and Otoniel González went 3-5 with two charters for home plate.

Under that attack, Alain Sánchez worked quietly for six innings, dishing out five strikeouts without allowing earned runs to reach his third success of the season, and Noel Reyna was the loser in a 3.1-inning outing where he was scored with four earned runs.

Renner Rivero did not allow freedoms to the felines of the capital, and his Crocodiles from Matanzas walked like at home on the grass of the Latin American stadium until they achieved victory with a final score of 5-0.

The right-hander from Unión de Reyes appeased the blue beasts for six innings while prescribing ten strikeouts to reach four victories in the championship and keep his troop firm at the top of this National Series.

The rest was taken care of by reliever Carlos Brayan Álvarez, adding three more crosses to the hosts’ strikeout locker to earn the save.

The yumurinos continued to cling to the small game and with two touches of the ball, linked to the classic error of the blue defense (number 38 of the campaign), they scored one in the opening chapter that was enough to tilt the weekly fight between the two in their favor squads.

In the third episode they scored another when the opposing starter Marcos Ortega allowed an indisputable, hit a pitch, and withstood a tugboat from Yadil Drake (5-1), but then they were silenced by him until the eighth, where the sentence of the shock.

A driving double by Ariel Sánchez (4-3) against left-hander Moisés Palacios, and a rocket by Javier Camero (4-1) that brought two more, before a shipment by rookie Luis Echazábal, was too much for the blue hosts and for the silent fan present in the stands.

A great catch by Roberto Acevedo with the bases loaded and another by Alberto Calderón with a runner on second base, avoided greater evils for Guillermo Carmona’s squad, who was restless this day due to the absences of his bench coach Javier Gálvez and his hitting coach Alexander Mayeta, expelled the previous day.

Industriales missed a couple of good opportunities in the fourth and sixth innings when they stuffed the sacks, but Oscar Valdés, the man with the best percentage in the championship driving in men in scoring position, couldn’t produce and gave up the third out in both times.

The Santiago de Cuba Wasps reacted and saved their honor at the José Antonio Huelga fence, by shaking the Sancti Spiritus Roosters to defeat them 13-7, in a match where 29 hits were connected between both teams.

The reliever Jorge Ángel Sánchez achieved the victory by working 3.2 innings with a clean score, and Adrián Pérez suffered the setback by not being able to get any out in his start after bowling the two rivals he faced and who later scored.

The Gallos never gave up a flag and had three more hits than their victimizers, but they left 11 cold runners in the sacks and the rival defense fabricated three double play plays for them throughout the journey.

Rodoleisi Moreno went 3-for-4 with a double and triple included and an RBI, and Frederich Cepeda hit a single and a pair of tube-eyes four times.

The Hurricanes of Mayabeque increased the intensity of their winds and escaped a sweep off the coast of Isla de la Juventud, by knocking down the Piratas of that territory 6-1, to remain in third place in the tournament.

Yulián Quintana, that right-hander from Jaruco who was barely 21 years old, continued speaking on the mound and pitched for eight innings to the rhythm of six strikeouts and a single clean score, to reach three wins in the contest.

The only score he allowed was almost at the end of his work, for a home run by emergent Jander Santamaría, a man who has three of the four home runs that the filibusters have been able to hit this season.

Jonathan Carbó gave up four walks, gave up seven hits with three earned runs in 5.2 innings, and racked up his third loss of the year.

They moved the wood for winners Lázaro Martínez (4-2) and Luis Fernández (2-1) to drive in two runs, and Juan Manuel Martínez (3-2) and Rafael Fonseca (4-1, double), to bring home one each.

In their José Ramón Cepero arena, the Ciego de Ávila Tigers gave 10 blows on the field to scare away the Guantanamo Indians, defeat them with a score of 5-1, and dominate the internal dispute between them.

Dachel Duquesne walked the entire route spacing out five hits with two strikeouts and a walk, and won his fourth game of the season, while Daniel Blanco conceded his fifth setback in seven innings where he allowed three runs.

Yudiel González was the most valuable with the wood in hand, shooting two singles and a double to drive in a trio of runs. Alexander Jiménez (5-2) and Dainier Hernández (5-1) drove in the other runs for their team.

The only score for the eastern tribe was pushed by Robert Luis Delgado (4-1).

The Lumberjacks of Las Tunas undertook it against the Holguin Cubs supported by their audience at the Julio Antonio Mella, and knocked them out in seven episodes 11-0 to leave the particular series of the week at home.

The Alarcón brothers once again stole the headlines by towing between the two more than half of the races. Yosvani (3-2) homered for four, and Yordanis (3-1) homered for two. Dailer Peña, 3-3 with a double and a couple of RBIs, was not far behind.

Alejandro Meneses reached four successes by walking a six-inning journey with nine hits allowed, and Wilson Paredes went to the showers with defeat in tow, in an opening of only one chapter where he scored five runs, one of them dirty.

For the Cubs, Laindel Leyva went 3-3, and Yasiel González (3-2) took the fences with empty bags.

Finally, others who tipped the scales in their favor on this day were the Toros de Camagüey, by beating the Alazanes de Granma 6-1 in their territory of Cándido González, to begin flirting with the qualifying zone.

Pedro Luis Guzmán was a thumbtack this afternoon on top of the box by leaving his rivals with only three undisputed, while he liquidated five and did not allow annotations to achieve his second victory of the campaign.

The 20-year-old left-hander Manuel Ernesto Frómeta made the first start of his career, but was defeated after working three innings where he allowed as many runs.

For the current national champions, Alexquemer Sánchez had an RBI hit in three official at-bats. 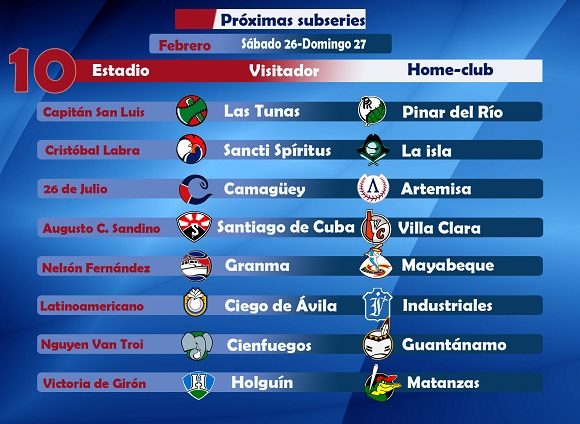 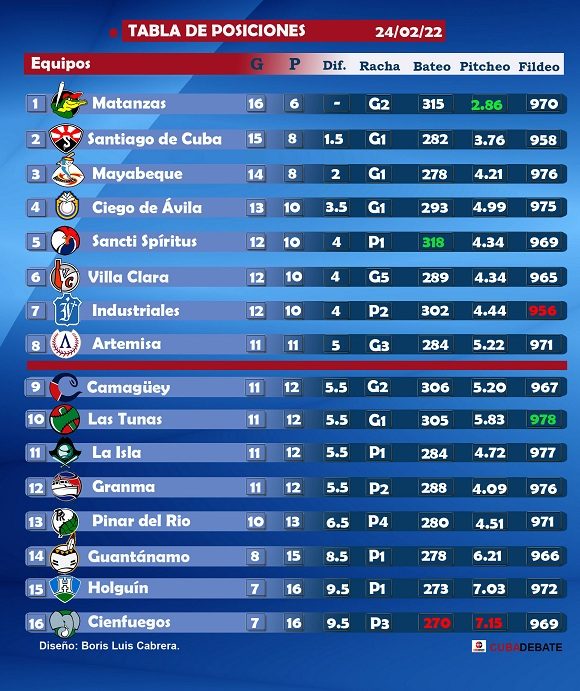 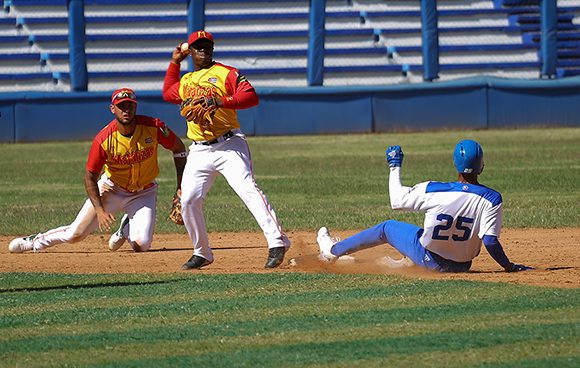 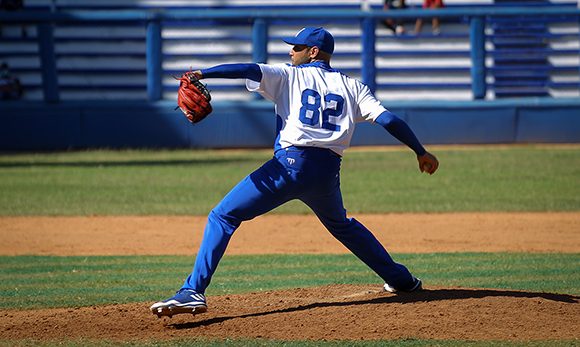 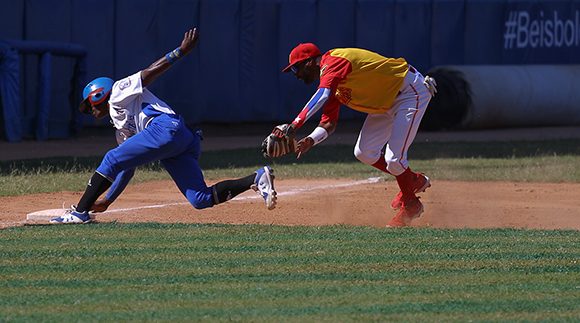 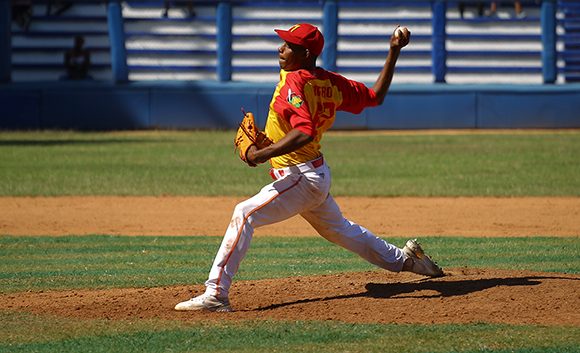 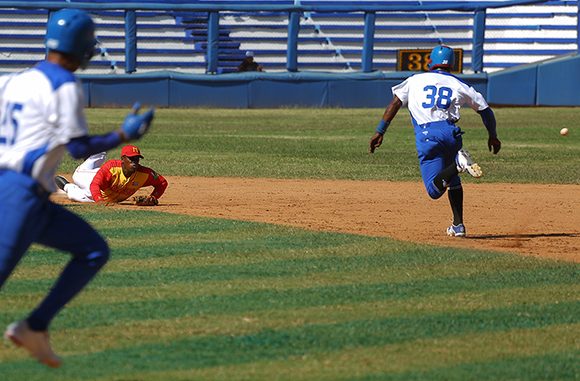 A play that raised the protest of Industriales for possible interference from the second baseman. Photo: Irene Pérez/ Cubadebate. 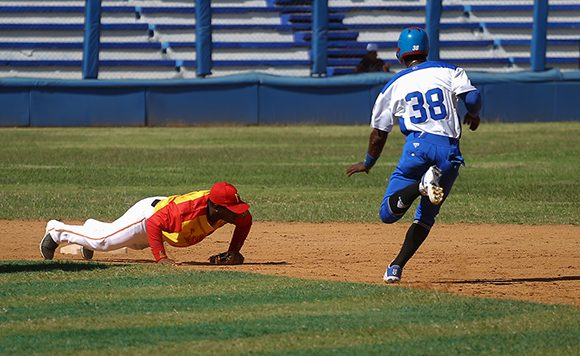 The defender dives to field not to hinder the runner. Photo: Irene Pérez/ Cubadebate. 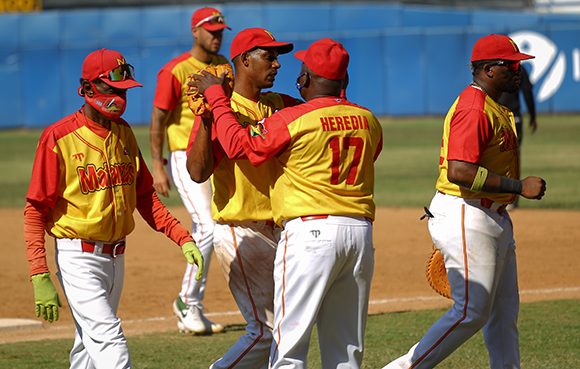