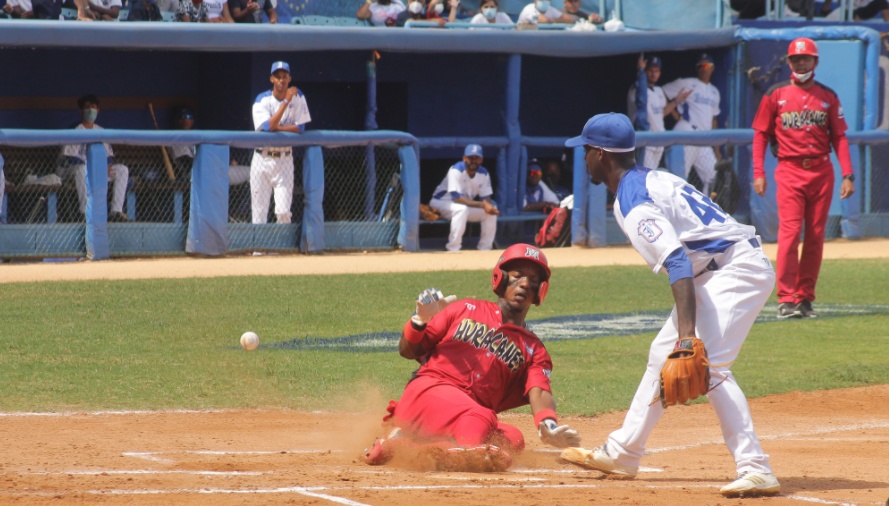 In a day in which four teams achieved weekend sweeps, two knockouts were awarded and two games had to be decided in an extra inning, the leaders warmed up their bats to maintain the top of the standings in the National Series unchanged. 61.

The Crocodiles from Matanzas remained “clean-handed” at the top of the table by knocking out the Piratas de la Isla 14-2 in seven episodes, to sweep them in the particular weekend duel.

Armando Ferrer’s troops did not believe in the absence of some of their regulars or that the battle was taking place on hostile ground and they unleashed an offensive of 20 bombings to destroy their rivals before the regulation end.

Yoanni Yera worked quietly for five innings, with two unearned runs, to win his first game of the season. Alberto Hecheverría was defeated, in an outing of just one chapter in which he allowed three runs.

Islander Yasmani Viera (1-0) drove in both of his team’s runs.

The Avispas from Santiago remained on the prowl just half a game from the position of honor, beating the Tigres de Ciego de Ávila 9-6 at the José Ramón Cepero stadium in Avila, to clean up the offense of the previous day.

Yoandri Garcés got two outs to get the victory. Luis Fonseca pitched the last three innings and scored his eighth save, the leader in that department.

Fernando Betanzo did not have a good start as he gave up five runs (one unearned) in just 2.1 innings and charged with the backhand. Yudiel González (5-1) homered with no men on base.

The Industriales of the capital could not finish off their rivals in the final after leveling the shares in the ninth episode and Mayabeque won the fight for the second day in a row, this time with a final score of 10-9, in extra inning.

Michael González’s Hurricanes swept away everything: the hopes of the crowds gathered in the stands above the third bench, the weekend’s particular fight and the third place in the standings, which was in dispute.

With overflowing momentum and an excessive aggressiveness that at times exceeded the limits of what was permissible, the visitors won fairly by absorbing the personality of their manager, to show that this season they mean business.

A two-run homer by Roberto Acevedo to tie the game sensationally when it came to collecting bats and balls shook the stands of the Latin American, but the joy was short-lived, as the opponents scored two in the top of the tenth and the Havanans could not to discount.

A walk with the full angles granted by Erick Cristian Gonzalez and a driving rocket by Jonah Colomina before a delivery by Pedro Álvarez to push another, nailed the last nail in the coffin of the hosts, who were fighting their game until the last second.

For the Industriales, Andrés Hernández came back hot by going 3-for-5 with a pair of doubles included and an RBI. Yasiel Santoya hit a solo home run to reach 1,000 hits in the National Series.

Juan Manuel Martínez stood out for Mayabeque, 6-4 with a trailer, and Rafael Fonseca, with two tubeyes and the same number of RBIs in four visits to the plate.

In the José Antonio Huelga, the Indios de Guantánamo planted a flag and left with a division of honors over the weekend, defeating the Gallos from Sancti Spiritus 6-5 in ten innings this Sunday.

An RBI double by Pedro Pablo Revilla (4-2) in the extra inning and a hit by Robert Luis Delgado (4-1) that brought it home, were enough for the victory of the eastern tribe. Waiter Eulogio Marcilli also moved the wood by hitting 2-for-5 with two RBIs.

Yeudis Reyes stayed three chapters above the box without accepting clean (two dirty) and achieved his second success of the campaign, while Yaniesky Duardo was the loser after a long relay of 4.1 episodes with two annotations, one of them the one that scored the ultimate advantage.

For the Roosters, Rodoleisis Moreno (4-1) drove in two runs and Daviel Gómez and Frederich Cepeda had a pair of hits each, the latter including a double.

In Capitan San Luis from Pinar del Rio, the Elefantes turned around and hit the Vegueros de Pinar del Rio hard to knock them down with a 9-6 scoreline and match the particular fight in this short series at the end of the week.

The best man from Cienfuegos on top of the mound did not disappoint and reached four wins without losses by working 6.1 innings with four runs on his account and the same number of strikeouts.

Isbel Hernández only pitched one inning in which he was stepped on home-plate twice and suffered the setback.

Yaser Julio González continued to have an excellent campaign and hit his fifth home run, leading the team in that department.

The Lumberjacks of Las Tunas continued their race to enter the classification zone by passing the broom to the Alazanes of Granma, defeating them this Sunday 9-3 with an offense of 15 undisputed.

Rafael Viñales (2-1) continued to show his strength at bat by firing his eighth home run of the contest (he is the leader), while the Alarcón brothers shared four RBIs in equal parts. Yosvani with three hits in four at-bats, and Yordanis with a single and double, also in four plate appearances.

The loss went to the records of the left-hander Leandro Martínez, in a lousy start in which he could not get out and exploded after four hits and a walk, with four earned runs allowed.

For the current national champions, Osvaldo Abreu went 2-3 with a trailer and Darién Palma hit a tubey four times.

The Villa Clara Sugar Producers took advantage of their visit to Artemisa and won the matches of the weekend duel against the Hunters of that province, this time with a score of 5-1.

Elier Carrillo was a giant in the box by keeping his rivals well tied up for seven sections with only three hits and one run allowed, to reach three wins in the season. Mailón Alfonso got the last four outs and scored the save.

Lefty Misael Villa accepted five runs (three unearned) in 5.2 innings and left through the narrow gate of the stadium.

For the hosts, Osbel Pacheco hit a pair of doubles in three at-bats, and Carlos Amat went 2-for-4.

Finally, the Camagüeyan Bulls matched the duel with the Holguin Cubs by winning 4-3 against their Cándido González audience.

José Ramón Rodríguez reached three wins by allowing a clean in six innings with seven prescribed strikeouts, and Ángel Luis Márquez saved the game after pitching a third of the game in which he allowed a solitary run.

Rubén Rodríguez worked well for 4 2/3 innings, allowing three hits with as many runs, and walked away defeated.

For the Cubs, Edilse Silva doubled twice and drove in one run, and Yasiel González (3-1) drove in another. 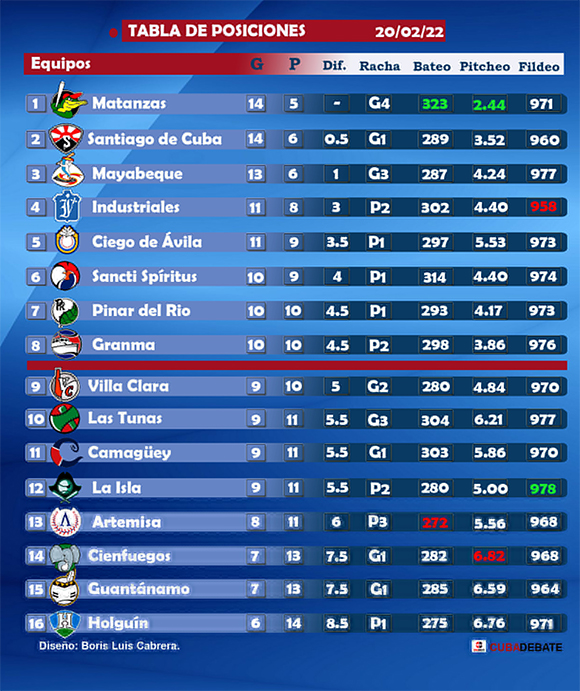 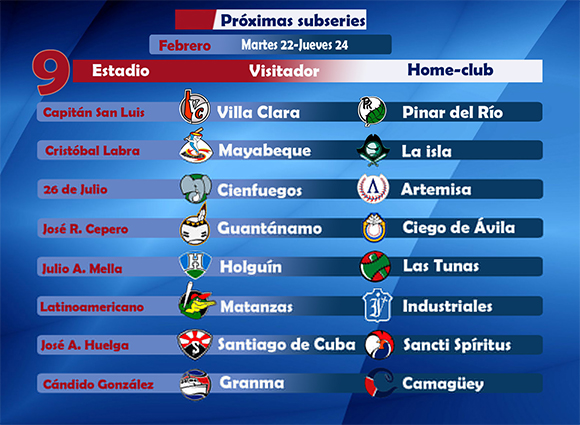