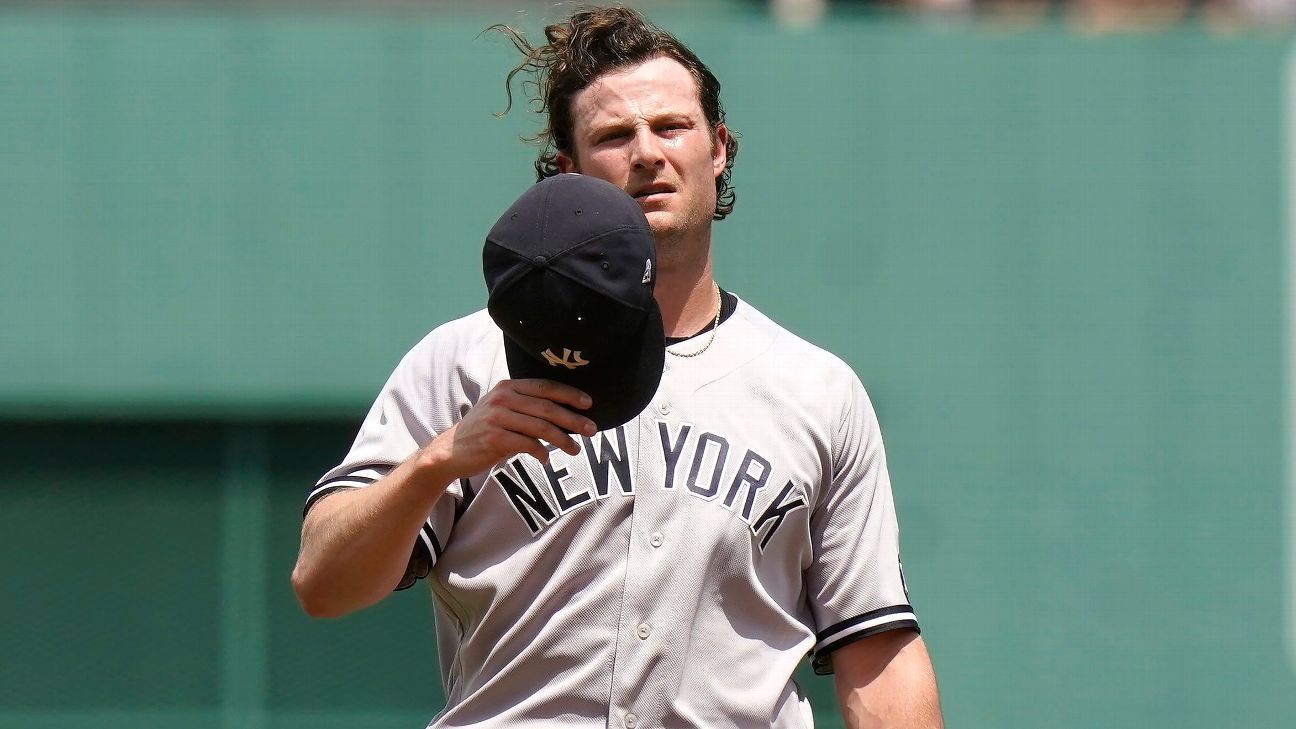 It’s been a tumultuous June for pitchers across baseball, and none of them have operated in a brighter spotlight than the New York Yankees ace, Gerrit cole. On Sunday, it took just one pitch for the spotlight on Cole to shine a little brighter.

That pitch was a 96 mph four-seam fastball with a spin rate of 2,414 revolutions per minute, and it landed in the front row of seats over the Green Monster in left field at Fenway Park. He was hit by the Boston Red Sox infielder, Kike Hernandez. He was caught by a fan wearing a Yankees jersey and cap, who seemed too happy to catch a home run from his team’s best pitcher.

That fan may not have known that Cole had never allowed a home run on the first pitch. He couldn’t know that later that inning, Cole would be touched up by a three-run homer from Rafael Devers – on a 0-2 count – and that Cole had never allowed two home runs in the first inning before. He couldn’t know that Cole would then give up a third homers (to JD Martinez) and would leave after five innings having allowed six runs (five earned). He couldn’t have known that Cole’s 4.65 ERA in June is the worst in a month since he was with the Pittsburgh Pirates in 2017.

In fact, that Yankees fan probably should have asked the question that many of us ask: Should the Yankees be concerned about Gerrit Cole?

Well, let’s go back a second and acknowledge the hyperbole of the question. Cole had a bad month by his standards. Their standards are quite high. Still, there’s no question that because Cole’s dominance has been so consistent, it’s worth at least trying to understand why he ran into trouble (compared to himself) and if those complications are likely to continue. Because the Yankees face an upward climb to get back into the fray and they need Cole to be the guy to take them up the mountain.

The Yankees lost 9-2 to the Red Sox on Sunday in a game they really needed to win, especially with Cole on the mound. New York fell to 0-6 against its main rival with the loss and, with the Toronto Blue Jays defeating the Baltimore Orioles, the Yankees slipped to fourth place in the AL East. New York is just 17-24 against opponents in the AL East this season.

Cole looked frustrated at times during his outing, especially during Boston’s four-run first inning. After Devers hit a pitch smack in the middle of the strike zone, Cole hit his glove with his fist and walked around the mound as Devers circled the bases. Finally, Cole squatted down and sat like that for several seconds with his head down.

“I couldn’t get the ball to break down,” Cole said after the game, lamenting his sporadic command. “I couldn’t get the fastball where I wanted to. I tried to get a good pitch to Devers and got him to the wrong part of the zone. The first pitch of the game [para Hernández] it was also badly located. “

It has been a difficult month for Cole. In addition to ERA, he allowed nine home runs during June, the second-most he has allowed in a month. (Cole allowed 10 home runs during August of last season.) After Cole struck out 14.8 batters for nine innings during the March / April period, that number dropped to 9.6 in May and 9.3 in June.

While a pitcher with Cole’s track record would normally benefit from the doubt by having a regular month, the timing of Cole’s downfall only fuels the spotlight that illuminates him. Unfortunately, the biggest baseball story in June has been the tightening of MLB rules imposing its prohibition against applying foreign substances to the ball, the sticky stuff that pitchers like Cole have relied on to grab and, in some cases, to improve the speed of turn and movement.
Cole was hesitant to broach the subject head-on when asked about it earlier this month, which pretty much ensured that his turning speed would make headlines for his subsequent outings. He has, but it was obviously not the problem for Cole on Sunday.

Cole’s turning speed against Boston did not return to pre-June levels, but averaging 2,442 revolutions per minute (rpm) on 37 four-seam fastballs, according to Statcast, it was higher than his previous two starts. More impressive was his speed: Cole averaged 98.3 mph on his four-seam fastball Sunday, the highest for any regular-season game during his career.

Cole’s fastball spin and velocity combinations, just to pick a pitch type, continue a recent trend, one that began this month when news began circulating about the compliance guidelines implemented since then in baseball. After Sunday’s start, Cole finished June with an average speed on the four-seam straight of 98 mph, the highest of any month in his career. Its average spin speed (2,398 rpm) was the lowest since July 2018.

“Some of the swings in the air have been lost a bit here in the last few outings,” Yankees manager Aaron Boone said. “But that is not all”.

In other words, the underlying metrics beneath Cole’s performance are evolving, but that in itself is little reason for Yankees fans to panic. Neither of those numbers matter if Cole is pitching a winning baseball, and despite poor final results in June, he really struggled in just two of five outings. The loss at Boston snapped a series of three consecutive quality starts, each of which saw Cole hold his opponent to two runs allowed.

“The bottom line is that he’s coming off two really good starts,” Boone said. “Today is going to inflate [su efectividad] And really if you look at it, it was a pitch that really got it. A three-run homer can ruin an outing, especially for someone of his caliber. “

Despite how bad things seemed at times Sunday, and as much scrutiny as Cole and the Yankees have been undercut as of late, with more than half the season to play, there are still few pitchers in baseball who you would rather have on the mound than Cole. Plus, he’s had casualties months before, and Fenway has never been his favorite spot, falling to 0-2 with a 5.14 ERA there in four career starts.

Yet on a day when the Yankees dropped another rung in the standings, the spotlight on Cole and his teammates is dazzling. The sooner you navigate the newer and highly regulated landscape, the better everyone will feel in the Bronx. No one knows better than Cole.

“It’s a pretty brutal feeling to disappoint the team like that,” Cole said. “Obviously he wanted to go out and give us a good chance to win, and I couldn’t do it today.”