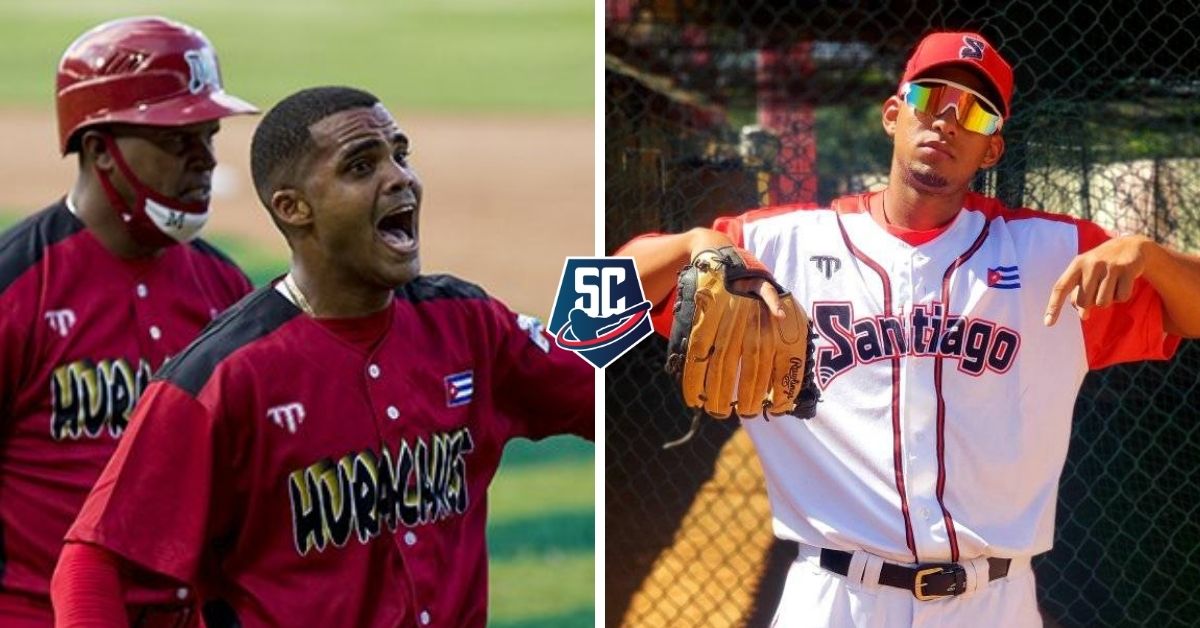 On the afternoon of this Sunday, the particular commitments of the weekend concluded in the continuation of Series 61 of Cuban baseball. The Hurricanes of Mayabeque completed the away sweep of the Leones de Industriales beating them in extra innings; the Waspas de Santiago stung the Tigres de Ciego de Ávila and struck back from the previous game, with youngster Luis Fonseca scoring his eighth save of the season; The Indios del Guaso surpassed the Gallos de Sancti Spíritus in the Huelga, while the Toros de Camagüey hung on the arm of José Ramón Rodríguez, “Pepe”, to match the particular commitment against the Cubs of Holguín.

Hurricanes made the manhood and swept Industriales in the Latino

The Hurricanes of Mayabeque (13-6) continue to be the revelation team of the 61 Series and consolidated themselves in third place in the Standings, after sweeping the Leones de Industriales (11-8) in the Latino, with his Sunday success of 10 × 9 in extra innings.

The visitors did not believe the thousands of fans who attended the Coloso del Cerro to support the Blues and defeated them for the second day in a row, in a game where friction and tension between rival players continued on the field, as happened on the day on Saturday.

It may interest you: LAST MINUTE: Commissioner blamed the provinces “to negotiate with players outside the country”

Mayabeque opened the scoreboard early with a couple of goals in the opening episode itself, taking advantage of a mistake made by the capital’s defense and facing the pitching of the pitcher chosen by Guillermo Carmona to start the match, right-hander Yandi Molina (1.1 EL, 3 H, 2 C, 1 CL, 0 K, 3 BB), who left the game very early, giving way to a total of seven relief pitchers employed by the locals, in a losing effort.

Industriales discounted one in the closing of the first, driven by a double by Sandy Menocal, while the Mayabequenses loaded the bases in the second, but reliever Reemberto Barreto forced Orlando Lavandera to hit for a double play. A triple by Juan Hernández in the opening of the third put the game 3×1, before a ground ball by Oscar Valdés (3-1, 2 IC), again with the bases loaded, brought the second for the Blues.

In the top of the fifth, Rafael Fonseca (4-2, 2 doubles, 2 CI, CA) doubled to left to propel two teammates to the plate and extend the visitors’ lead to 5×2, while a rocket Denis Laza’s driver an inning later, brought the sixth for Mayabeque, but Yasiel Santoya (2-1, HR, CI, CA), with a home run to left field, hit the locals 6×3.

The youngster Mailon Cruz, starter for the Hurricanes, threw a very good ball for six complete innings, with three earned runs allowed and seven hits, in addition to two strikeouts and four walks, leaving the game with a four-run lead and ready to take credit, after his team added another touchdown in the lucky inning.

However, Industriales went with everything to Mayabeque’s first reliever, Michel Batista, who had three runs scored in the bottom of the seventh, with two outs on the board, combining three hits, a defensive error and three free walks, closing the shock 7 × 6.

The Mayabequenses manufactured what could be the puntillazo in the top of the ninth, but a two-run homer by Roberto Acevedo, as a pinch hitter, at the time of picking up the bats, sensationally equalized the game, against reliever Marlon Vega (4- 1, 3.1 EL, 2 H, 3 C, 2 CL, 3 K, 2 BB), ultimately the winner of the match.

However, with the stands inflamed and with the temperature level very high on the playing field, Mayabeque was not impressed and scored the two decisive ones in the opening of the tenth, in the Schiller Rule, already with two outs on the scoreboard, for walk by reliever Erick Christian González (1-1, 2.2 EL, 1 H, 3 C, 1 CL, 2 K, 5 BB) against pinch-hitter Orlando Capote and RBI single by another substitute, Johan Colomina, against right-hander Pedro Álvarez.

Industriales scored a run in the bottom of the tenth but it was not enough to come back, Erick Christian himself carrying the setback. Both teams had 11 hits and made an error on defense.

Third baseman Andrés Hernández went 3-for-5 with a pair of doubles, one RBI and three runs scored on his return to the capital’s lineup, while Alberto Calderón went 2-for-5 with two runs scored. The lead man from Mayabeque, Juan Manuel Martínez, compiled 6-4 with a tow and three laps to the table, while Luis Fernández did it 3-2.

At the José Ramón Cepero stadium in Ciego de Ávila, the Avispas de Santiago de Cuba (14-6) leveled the subseries against the Tigres (11-9), after prevailing today in a good ball game with final board of 9×6to stay just half a game from the top of the league, occupied by the Matanzas Crocodiles (14-5).

It may interest you: CAPITAL REPAIR: For the 3rd year in a row, Ciego would be left without the League

On the Wasps side, the left-handed Ediasbel Valentín did quite well from the box (4.0 EL, 3 C, 2 CL, 5 H, 2 K, 2 BB), but he could not take the victory because he got complicated in the fifth episode. and went to the showers with a 7×3 advantage, but without completing the regulation innings, giving way to reliever Yosmel Garcés (1-0, 1.1 EL, 2 CL, 2 H), ultimately the winner of the clash, his first success of the contest.

It may interest you: LAST MINUTE: Cuba PROHIBITED official media from broadcasting Series 61

A home run by Yoelkis Guibert (3-1, HR, CI, 3 CA) in the sixth inning put the game 8×3, but the Tigers discounted two in the closing of that inning against Yoendri Montero (0.2 EL, 0 CL, 0 H, 1 K, 2 BB), ineffective as a reliever for the second day in a row, because although he was not hit, an unusual lack of control got him into trouble.

Ciego had the bases loaded with no outs in the lucky inning, with a tie at first and an advantage over the batter in turn, but manager Eriberto Rosales turned to his “cloth of tears”, the young Luis Fonseca, who he struck out both men in turn and forced the next in line to miss at first. Fonseca was in charge of pitching the last three innings with only one hit allowed, one earned run, with four strikeouts and one walk, to add his eighth save of the campaign, ratifying himself as the leader in that department.

It may interest you: LAST MINUTE: National Commission REDUCED SANCTION to players who violated regulations

Indians stopped the Gallos in 10 innings coming from behind

In the José Antonio Huelga stadium in Sancti Spíritus, the Indios del Guaso (7-13) left the bottom of the table after beating the Gallos de Sancti Spíritus (10-9) with 6×5 marker in 10 entries.

It may interest you: INJURED: Alfredo Despaigne suffered a tear and was out of the game

But in the sixth inning, the visitors rebelled and scored a three-run rally to take control of the clash, exploiting Zerquera and also batting against star reliever Yanieski Duardo (4.1 EL, 7 H, 2 C, 1 CL, 2 K , 0BB). Los Gallos tied in the eighth against closer Yeudys Reyes (3.0 EL, 2 H, 2 C, 0 CL, 1 K, 3 BB), taking advantage of the mistakes made by the Guantanamo defense that made three blunders.

With the 4×4 clash, both teams went to the Schiller Rule, where the Indians scored a couple of runs and the Roosters only one, thus defining the game. The winners had 11 hits for the defeated nine, with an error to the local defense. The victory was for Yeudys Reyes (2-0) and the setback for Duardo (1-1)

For the Indians, Luis Ángel Sánchez, Pedro Pablo Revilla, Over Cremet and Eulogio Marcillí had a couple of hits per capita, while Marcillí himself brought two teammates to the record. For the Gallos, Daviel Gómez went 2-for-5 with a double and a run, while veteran Frederich Cepeda went 2-for-4 with a double and Rodoleisi Moreno (4-1, CA, 2 CI) drove in two runs .

Finally, in the Cándido González de Camagüey, the Toros (9-11) continued to get closer to the qualifying zone and further sank the Holguín Cubs (6-14), after beating them 4×3 and match the particular commitment.

The visitors went ahead 2×0, taking advantage of the inaccuracies of the local defense, but the right-hander José Ramón Rodríguez (3-0) remained constant in the box and spaced out eight hits from Holguín during six full innings of work, with seven strikeouts and pair of walks, both intentional, to add his third success of the contest.

At the end of the fifth, the Camagüey turned the scoreboard with a three-race rally and added another in the sixth to extend the 4×2 advantage. The holguineros closed the scoreboard in the opening of the seventh, but the reliever of the Toros, Angel Luis Márquez (3.0 EL, 2 H, 1 CL, 2 K, 0 BB) did very well in the closing of the match and ensured the victory, adding his second save of the season.

For the locals, Yordanis Samón went 2-4 with a double and a run scored, while Leonel Moas Jr. (4-1) had two, while Laindel Leyva (2 runs scored), Yordan Manduley (double) and Edilse Silva (2 doubles), hit a pair of hits for the losers.