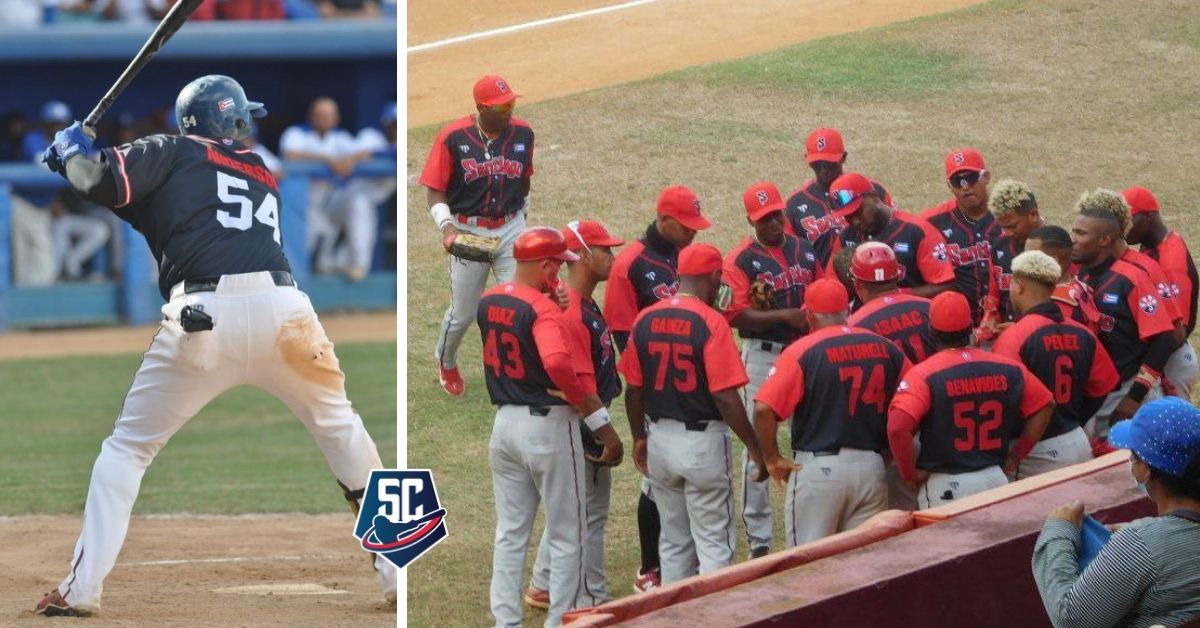 In the continuation of the intermission duels of the week in the 61 National Baseball Series, the Toros de la Llanura managed to balance the subseries against Industriales supported by their star Leslie Anderson who could not be put out in the Cándido González; the Sancti Spiritus leaders came back from behind with a five-run rally in the 8th inning to dispatch the Hunters and reach 32 wins.

The Wasps Santiaguera also came back and dodged another bite from the Crocodiles, while the Alazanes from Granma continue to gallop at will on their land and this time they gave the bottom-ranked Cienfuegos a super knockout.

Camagüey’s first baseman Leslie Anderson (4-4/2B/1C/2CI) was intractable this Wednesday afternoon by linking four hits to Industriales’ pitching and thus led the Toros de la Llanura to their first victory of the campaign over the blue ones with a 5×2 board.

It may interest you: National Commission publicly EXPLAINED the fraud in the Cuban Little Leagues

Miguel Borroto’s disciples scored their five runs between the third and fifth innings, which were enough thanks to the excellent pitching performance of right-hander Julio César Martínez (6.0EL/3H/1CL/2K), who despite giving eight walks per balls he knew how to put his arm in at the right time.

For Guillermo Carmona’s Leones, four pitchers paraded down the mound with a defeat for Raimond Figueredo (5.0EL/11H/5CL/2K/1BB).

In this way, Industriales fell to sixth place in the table with a balance of 27-22 and now they feel the breath of Wasps and Crocodiles in the fight for the last three qualifying positions.

Roosters go back up and continue with a firm step

The relief pitching of Cazadores de Artemisa made waters again in the final stages of the clash and allowed seven touchdowns to the Gallos from Sancti Spiritus, who achieved their 32nd smile and reaffirm themselves as the leaders of the championship.

After six innings, the Artemiseños comfortably won 6×1, but their pitching did not last and the rival offense was unleashed, especially for their forward man Rodoleisi Moreno (4-3/3B/3C/3CI), while Frederich Cepeda and Yunier Mendoza brought draw and win with two hits.

The credit went to right-hander Yoanis Hernández (1-2), who only had to throw a third of an inning to win his first championship game and Yanieski Duardo saved for the second consecutive day.

In the Guillermón Moncada, the left-hander from Camagüey who plays for Matanzas Dariel Góngora dominated the Santiago shootout at will for five innings, but in the sixth the Wasps were unleashed until they scored five runs that were enough to decide the game and break a streak of six consecutive defeats that threatened to take them out of the zone of privilege.

It may interest you: WBSC President Ricardo Fraccari sent a message to Cuba about the team for the World Classic

Eriberto Rosales’ men won with a 9×4 scoreboard, supported by the bat of their star waiter Santiago Torres (5-3/3B/4CI), who led the comeback with four calls for the plate, while right-hander Carlos Font ( 3-2) was in charge of tying the bats to some Crocodiles that remain on the edge of the classification.

This subseries seems important, since both novenas are direct rivals in the close fight for the last places in the postseason.

The current national monarchs, the Alazanes de Granma, did not stop hitting until they knocked out the battered Cienfuegos with a 17×7 slate by way of a super knockout.

For the second day in a row, the Granma players once again unleashed their offense, this time with around twenty hits on a perfect afternoon for their first striker Yosbany Millan (6-6/2B/3C/3CI), impossible to dominate in six visits to the batting cage .

In other results of the day: The Avilanian Tigers returned the favor and knocked out the Vegueros de Pinar del Río 17×2; The Hurricanes unleashed their offensive against the Guantánamo Indians and dominated them 15×6; Holguín entered fully into the fight for classification by beating the Leopardos from Villa Clara for the second time 8×3, and the Lumberjacks from Las Tunas beat the Piratas for the second day with the same final score of 7×4.