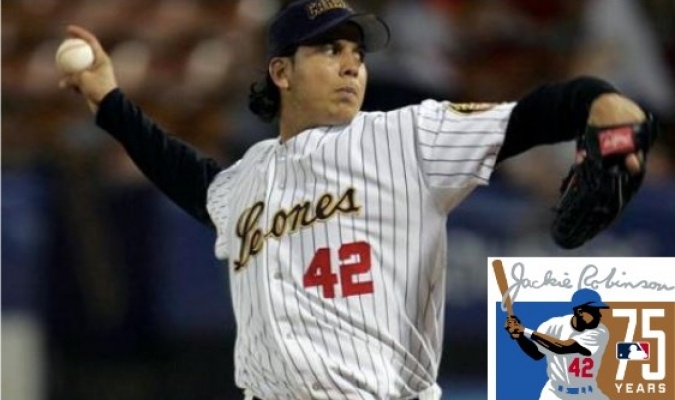 April 15 is a very important date in the world of Major League Baseball, it is the day on which the immortal career of Jackie Robinson, the man who broke the racial barrier in major baseball during the 20th century, is honored year after year. . He used the number 42 throughout his career, which is why on the day of his entertainment, all the players wear that number.

In the field of the Venezuelan Professional Baseball League (LVBP), the most famous number 42, at least in recent times, is Orber Moreno who through his social networks expressed his full pride for having worn that pair of distinctive digits.

The former reliever of Leones del Caracas stressed on Twitter that Jackie Robinson was the player who made “we were all the same in baseball.”

“What a pride to have worn number 42 during my career in Venezuela. Today everyone in the Major Leagues honors Jackie and will wear his number 42,” he added.

Jackie Robinson was the player who made everyone equal in baseball. “What a pride to have worn # 42 during my career in Venezuela” today everyone in the big leagues pays tribute to Jackie and will wear number # 42 of his. ðŸ’ªðŸ ¾âš¾ï¸ ðŸ™ ðŸ ½ pic.twitter.com/3n8ZtMVI0S

For 12 seasons in the LVBP, Moreno always pitched in the long-haired capital’s uniform.

Also read: May 6, tentative date for the return of Ronald Acuña Jr.

During his first steps in the highest level of the ball, the shortstop legend of the Caracas native began to be written with the number 42 on the Seattle Mariners uniform.

Also read: These are the most expensive computers in the world

The Venezuelan Samurai built a great career in the Legano Oriente; During his time in that baseball he stood out as one of the most powerful sluggers, beware if not the most powerful bat. He also used the unforgettable number 42.

On Jackie Robinson Day, Orber Moreno is proud of the number 42