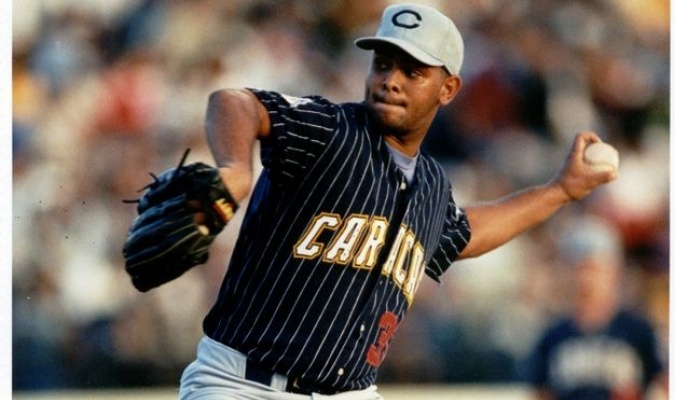 If the statistics prove anything, it is that Omar Daal is the best left-handed starter in the rich history of Leones del Caracas, and may Pablo Torrealba forgive us.

During his time as an active pitcher, the native of Zulia state marked an era with the long-haired, to the point that on a couple of occasions in the 90s, he earned the Pitcher of the Year award in the Venezuelan Professional Baseball League (LVBP).

Also read: Álvaro Espinoza: My big dream is to lead the Magallanes (+Video)

Today, on the occasion of his 50th birthday, we take a look at what his track record was both in Creole ball and at the highest level of ball.

Omar Daal, what a lefty for the Lions!

During the 1990/1991 season Omar Jesús Daal Cordero made his debut with the cast of the capital, at 18 years old he was on the mound for 1 inning.

For his second tournament, he quickly gained importance in the Caraquista pitcher scheme, something that was reflected in the 46.2 pitched stretches, leaving a 2-4 mark with a 5.21 ERA.

Also read: Romer Cuadrado: The change to Magallanes was a surprise

After that, his moment came at the top of Creole pitching, because in 1995/1996 his ERA was even better, 1.68 in 96.2 episodes and a great 10-2 mark. That performance was more than enough to be recognized as Pitcher of the Year.

That prize monopolized it again in the following championship. In 1996/1997, he showed an even better level with an ERA of 1.49 and a record of 9-1 in addition to winning the Gold Glove, in both tournaments his whip was 1.11 and 1.05 respectively.

From that point on, he was gradually seen less on the national diamonds, always showing a good level, motivated by his increasing responsibilities in the Major Leagues.

Omar Daal in the Big Show

Unlike Venezuelan baseball, his journey in the best baseball in the world was marked by moments of ups and downs, being his sweetest moments with the uniform of the Arizona D-Backs.

Although his ERA the following year rose to 3.65, he was able to emerge victorious 16 times, an unprecedented number for Venezuelan left-handed pitchers in the majors. In fact, in that 1999 he was involved in a great competition with “El Torpedo”, Freddy García, to establish what was then the maximum number of victories achieved by a Creole starter in a season.

His laurels at the time placed him as the second most successful Venezuelan left-hander in the Big Show, only behind Wilson Álvarez (102). Both were surpassed by Johan Santana (139).

Omar Daal, the great left-handed pitcher of the Leones del Caracas and his 50th birthday (+Videos)