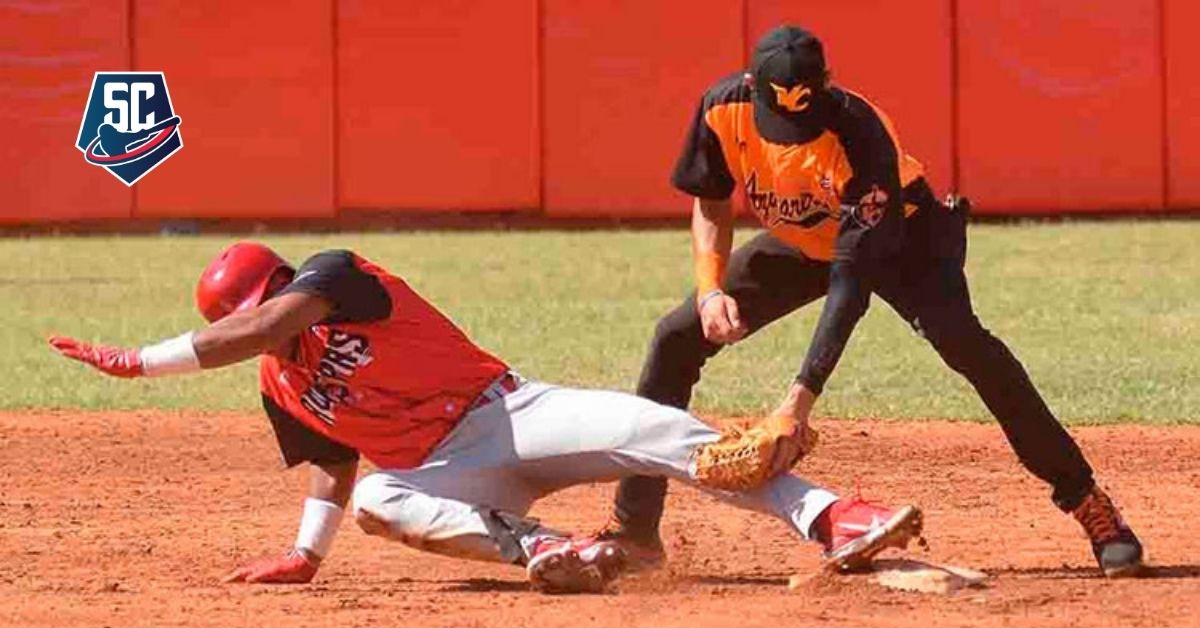 On the afternoon of this Saturday, February 26, the tenth individual subseries of the 61st edition of the National Baseball Series began, matches of only two games on the baseball weekend.

It may interest you: BY PROVINCE: Havana contributes MORE PLAYERS to MLB, reported Romero

In a historic matchup, the Villa Clara Sugar Producers came from behind against the Santiago de Cuba Wasps and tied the game in the bottom of the ninth, with two outs on the scoreboard, before leaving them lying on the Sandino field in the conclusion of the tenth in the Schiller Rule, while the Holguín Cubs did not believe in the leader of Series 61, the Matanzas Crocodiles and crushed them at home.

Similarly, the Pirates of the Island overwhelmed the Roosters of Sancti Spíritus in the Labra, while the Elephants of Cienfuegos whitewashed the Indians of Guantánamo in the Pearl of the South.

At the Augusto César Sandino stadium, the Villa Clara Sugar Producers (13-10) extended their streak of consecutive games without defeat to six, after taking this Saturday’s match against the Santiago de Cuba Wasps (15) out of the freezer. -9) and leave them to the field 5 × 4 in 10 innings, after coming just one out from losing.

The locals opened the scoring in the closing of the second chapter by Leandro Turiño’s homer (3-2, HR, CI, CA) from a line drive to left field and added another score in the fourth, combining two singles, one of them by Turiño himself, with a ground ball to Yuri Fernández’s box, putting the 2×0 on the board.

However, the indomitable discounted one in the top of the sixth, when a pair of consecutive hits by Adriel Labrada (4-2, 2 CI, CA) and Rudens Sánchez, opening the inning, took the orange starter out of the box. A sacrifice bunt by Jorge Luis Gutiérrez against reliever Pedro Manuel Castillo (1.1 EL, 2 H, 2 C, 1 C, 1 K, 1BB) put the runners ahead and a ground ball to shortstop by Dasiel Sevila drove in the first of the visitors.

An inning later, the Wasps took over 3×2 after scoring two runs against Castillo, combining a hit by Marcos Fonseca, a walk to Francisco Martínez, an RBI by Yoelkis Guibert and a sacrifice fly by Labrada.

The reaction of the Sugar Producers was immediate and they tied the game 3×3 at the end of the lucky inning against the offers of the reliever par excellence of the indomitable, the young Luis Fonseca (2.2 EL, 6 H, 1 CL , 0 K, 3 BB), who was hit by the orange offense. Yosbel Borges opened the inning with a hit to get Betancourt out of the box and after Magdiel Gómez was out, which led Borges to second, two straight singles by Raidel Pedraza (4-2) and Juan Carlos López (4-2) allowed that Villa Clara scored his third run.

The locals were able to expand the board in that same chapter, as Yurién Vizcaíno (5-2) unstoppable released to right field but Pedraza could not score with the connection and López was put out trying to advance beyond second base. An intentional walk to Turiño filled the bases, but an infield grounder by Otoniel González ended the inning on a force out.

The indomitable took control in the top of the ninth against reliever Randy Cueto from Villa Clara (3.2 EL, 1 C, 0 CL, 2 K, 1 BB), after two outs, by a single by Francisco Martínez who reached second base by error by right fielder Otoniel González and after the intentional walk to Guibert, the indomitable third batter Labrada released a driving rocket to the right to put the match 4×3.

However, the oranges did not believe in the young Fonseca and tied the game in the bottom of the ninth, also with two outs on the scoreboard, for two hits and a free walk, which loaded the bases. The scene was set for right fielder Otoniel González to come and consume his turn at bat, losing his team by one and after failing four times and committing three errors in the match.

The situation could not have been more tense, because on account of two balls without strikes, the manager of the Wasps, Eriberto Rosales, decided to remove Fonseca from the box, giving the responsibility of closing the game to veteran Yoendri Montero (0.1 EL, 1 H , 1 C), in a highly controversial decision. The result: Villa Clara replaced Otoniel with veteran Andy Zamora, who finally won the ticket and tied the match 4×4. However, Montero put his arm in and was able to get the 27th out of the Santiago defense and take the game to Regla Schiller.

It may interest you: “Playing in Industriales was NOT easy at all”, CONFESSED former player from the capital

In the top of the tenth, the Santiago players put two runners in circulation due to the Schiller Rule, but Francisco Martínez missed the sacrifice bunt, forcing at third base, while Guibert was dominated in a double play to close the scoreless inning.

Minutes later, a single by Magdiel Gómez on touch of the ball and an error by the Santiago defense on the play itself, the only one they made in the afternoon, decided the match in favor of the Azucareros and left Santiago on the field. The winners added 13 hits and four errors for seven unstoppable the defeated. The success went to the account of Randy Cueto (2-0) and the setback for Yoendri Montero (2-2)

The Holguín Cubs (8-16), last place in the Standings at the start of today’s session, broke all forecasts and They gave a sovereign beating of 10 × 1 to the leaders of Series 61, the Crocodiles of Matanzas (16-7), in their Victoria de Girón yumurino grounds.

It may interest you: SKINNY AND INJURED, but HE SIGNED: Incredible story of a Cuban major leaguer

A double by Yordan Manduley and an RBI single by Edilse Silva opened the scoreboard for the visitors in the upper part of the fourth inning, while an error by the Matanzas defense on a hit by Edilse himself with the bases loaded and two out, allowed the game to to put 3×0 in the fifth.

Two innings later, a sweeping five-run rally by the Cubs widened the scoreboard in their favor, including an RBI single by Maikel Cáceres and a brace by Edilse (5-3, 2 doubles, 3 RQs, CA) the highlight. on the offensive by the Orientals, all against the opener of the Crocodiles, the lefty Dariel Góngora (3-1, 6.1 EL, 7 C, 4 CL, 9 H, 6 K, 3 BB), loser of the match, his first setback it’s from the season.

The Cubs added two more in the eighth against relief pitching from the Matanzas, while a double by Yadir Drake with Jefferson Delgado at first put the Crocodiles’ only run on the board.

Yordan Manduley also had a good afternoon offensively for the Cubs as he went 3-for-4 with a double and four runs scored, while Laindel Leyva went 2-for-5 with an infield turn. For Matanzas, seven of the regulars added at least one single.

Holguineros starter Rubén Rodríguez (2-2) was successful in the match, after working for five full innings, with no earned runs allowed with six hits, one strikeout and three walks, while Wilson Paredes ( 4.0 EL, 1 Cl, 1 H, 3 K, 3 BB) scored his second save of the series.

At the Cristóbal Labra stadium on the Isla de la Juventud, the Pirates (12-12) stopped the momentum of the Gallos de Sancti Spíritus (12-11) and overwhelmed them with 10×2 board. The winners had 15 hits to the losers’ eight and both teams made an error on the field.

It may interest you: “Get ready that you are the center field of the CLASSIC”, the incredible PREDICTION of the father of the Cuban major leagues

Cluster of five runs at the end of the second chapter, two more runs in the fourth and three in the sixth were enough for the pineros to achieve success, in a game in which eight of the nine Pirates regulars connected unstoppable, with highlights for Jordanys Acebal (4-3, IC, 2 CA), José Luis Bring (4-2, double, 3 IC, CA), Eliseo Rojas (4-2, IC, CA) and Laidel Águila (3-2) , double, 2 CI, AC).

For the Gallos, the fifth player Alberto Rodríguez went 3-4 with a double, while veteran Frederich Cepeda (4-1) hit a home run.

The Elephants of Cienfuegos (8-16) they whitewashed 7×0 the Indios del Guaso (8-16) in a duel of cellars held at the 5 de Septiembre stadium in the Perla del Sur, hanging from the arm of right-hander Hermes González, who worked completely and added his fifth victory of the campaign, without the reverse shadow.

The Cienfuegos starter only allowed two hits in nine full innings, with five strikeouts and a single free walk, to reaffirm himself as one of the best pitchers of the season. The loss went to Alexander Valiente (1-2), who allowed only three hits and four runs, two of them earned, in 4.0 innings of work, striking out one and giving away four walks.

The Elephants had eight hits and played defense immaculately, while the Guantanamo team committed four blunders in the match. The winners’ third batter, Juan Miguel Soriano, went 2-for-4 with a couple of RBIs and the same number of infield turns, while catcher Richel López went 2-for-3 with a run scored.

OF INFARCTION: Villa Clara left Santiago to the field, Matanzas WAS CRUSHED by the cellar. Summary Series 61