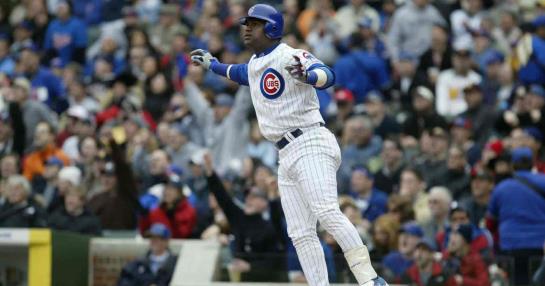 The purist baseball rapporteurs, who still many influence with their votes in the Baseball Writers Association of America, consider that the true home run record is that of Babe Ruth and Hank Aaron, since, to Barry bonds, Mark McGwire, Manny Ramirez Y Sammy Sosa they are looking for the extra leg of the steroids.

However, a new breed of young chroniclers is not giving mind this year to the issue of steroids and is voting for Barry bonds for him Hall of Fame from Cooperstown, where it has 80.9% (75% is what is required), after 103 tickets revealed of 392 until Saturday or 28.1% in Ryan Thibodeaux’s count.

However, the Dominicans Alex Rodriguez (46.4%) and Sammy Sosa (25.5%) continue to receive the punishment vote. Sosa’s case is worse since this year is his last attempt through the Baseball Writers Association of America.

David ortiz on his first try he’s 82.7%, a projection he paints will keep that solid direction for immortality.

However, the issue of home runs and steroids it continues to be the highlight of every discussion table.

Was it harder to hit home runs in the Ruth era than it was in Aaron and Bonds?

There will never be an answer around that hot topic. So there is little point in trying to find it. In my case, I admire the home runs of Ruth, Aaron, Mark McGwire and Sammy Sosa.

What fault did Babe Ruth have that many of the relievers to whom he hit home runs were scraps from starting pitchers?

What is the fault of Aaron, Bonds, McGwire and Sosa that the stadium gates are smaller, that the balls are more alive, that the bats are personalized and of better quality and that the effectiveness of the pitchers is today above the 4.00?

Let’s enjoy baseball in its proper dimension, because if yesterday there was quality, today we also have it.

HOF WITH AN H4: “Who is the Hall of Fame member of Cooperstown who hit the fewest home runs in his career? Hoyt Wilhelm, who pitched in the majors for 21 years. His only home run was taken in the first at-bat he consumed. It happened with the Giants, then of New York, on April 18, 1952. He played with nine teams, until 1972. The others, Cardinals, Indians, Orioles, White Sox, Angels, Braves, Cubs and Dodgers.

A DAY LIKE TODAY: In 1933, Monday, with the emblem of the eagle, the Santiago BBC baseball team was founded, as the first representative ninth of the city of Santiago and the region. Officially named “Águilas Cibaeñas” on January 28, 1937, a proposal made by Luis Tomás Saillant. Today he celebrates his 89th anniversary at the Tetelo Vargas Stadium, seeking his second victory of the semifinal series against the Eastern Stars.

In 1996, Máximo de la Rosa, from the Estrellas de Oriente, jumped from the box after one out at the Quisqueya stadium when the bats of the Escogido scored 7 earned runs to the beat of 6 hits.

In 2012, in the Todos Contra Todos, Pablo Ozuna hit 4-3 with 2 RBIs and the Leones del Escogido beat the Águilas Cibaeñas 8 – 3. Runelvys Hernández is the winner. In the other playoff game, the Gigantes del Cibao beat the Tigres del Licey 9 – 1. Fabio Castro beat Ramón Ortiz.

Sports chronicler. Lover of baseball and its experiences.