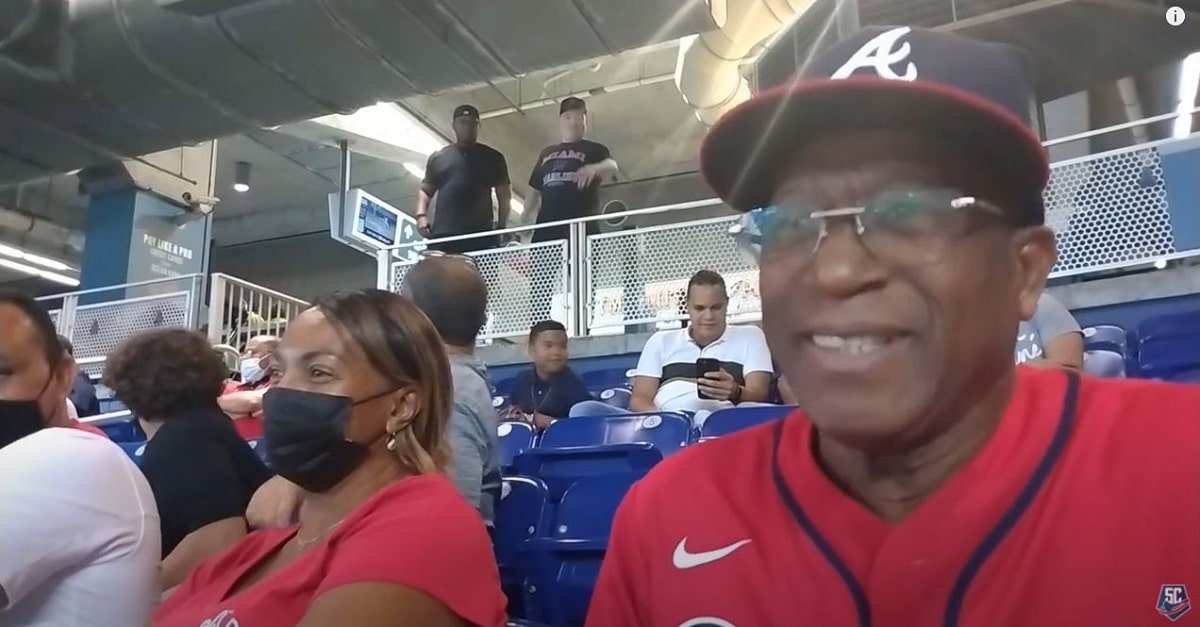 Jorge Soler had a forgotten start to the season, but shortly before the All-Star Game he began to raise his offensive rhythm that has returned the respect of his opponents, with which he even managed to make a contending and historic team like the Atlanta Braves They will claim it from Kansas City.

“Air Soler” visited the Marlins stadium for the first time with the Georgian uniform, and his main fan was there to support him, the one who has practically not missed any of the moments of one of the most talented Cuban players who have acted in the majors.

It is nothing less than his father Jorge, who, totally excited after a double from the native of San José de las Lajas, wanted to talk about some interesting topics around his figure.

Soler Sr. acknowledged the enormous satisfaction he feels every time his son does a good job on the field, although the images seen in the recorded video show the constant tension and nervousness in each at-bat. “I have been in almost all its moments and I say that it is not easy to see this”, declared us exclusively for our YouTube channel.

In the Little Havana baseball park there were a fairly large number of Soler’s relatives, including his wife and two children, as well as his mother. The latter expressed her feelings much less than the father, although Jorge Sr. and even she smiled at the question of whether she took matters more calmly regarding her first-born on the field of play. The reaction certainly indicated the opposite.

Regarding the outlook for the remainder of the season, the father was quite optimistic. “I think he is going to finish quite well with 25 or 26 home runs and the Braves are going to qualify for the playoffs because they have a very good team with very young and talented players.”

On the probable cause of the low production of Jorge Soler In the first part of the contest (all its parameters were discreet) and the drastic change that it evidenced since the middle of June (especially its long-range production), the man considered that everything was based on a better preparation, and that what happened to the It originally had to do with normal slumps that everyone goes through. “That’s what they get out of and he showed it,” he said.

Jorge agreed on the importance of the remainder of the championship for his son, taking into account that after October he will become a free agent. A performance of nearly 30 home runs and an RBI number over 70, coupled with his age (29) and physical potential, plus the mix of power and speed, can give him a good deal. Of course, for him it would have been ideal if the agency had reached him a couple of years ago when he was one step away from 50 home runs.

“I tell all the fans who follow my son, that Soler Power is great and he will continue to show it,” he ended up saying with laughter included from him and from the mother of the 2016 World Series champion with the Cubs, who after being one of the great stars of the Royals now has a very important role in Atlanta.

Although for many the outfielder’s performance is still far from his great year of 2019 when his 48 and 117 trailers placed him among the great sluggers of the entire MLB, his reaction came at the right time, not only because it happened with a long way to go. by the end of the season, but because he had a chance to be chosen by a contending club where he can improve numbers like RBIs.

Although there is a month and a half left until the culmination of the regular season, his father’s prediction of at least 25 homers doesn’t seem like an overly ambitious goal. If he achieved that figure, he would regain the confidence of many who thought that what he achieved a couple of years ago was a temporary phenomenon, even with his indisputable talent that he began to show after his debut with Chicago in 2014. However, for a few as his biggest fan. , his father, plus the rest of his extended family who follow him everywhere, little by little the waters are taking the true level.