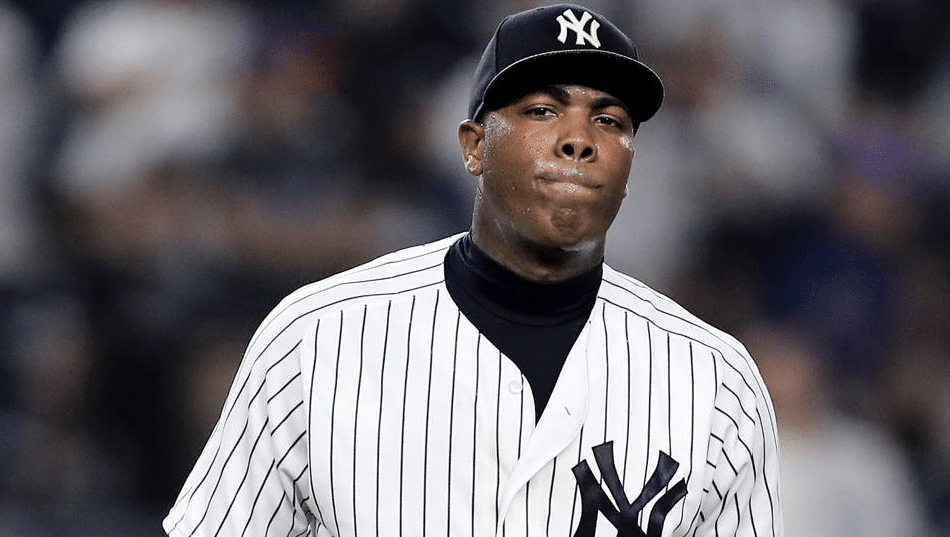 If high-velocity pitches are in fashion today in baseball, one of the biggest promoters of such a trend has undoubtedly been the Cuban flamethrower of the new york yankees, Aroldis Chapman.

Although it seems that over the years the powerful four-seam fastball of the 6’4” tall giant has stopped influencing fear against opposing hitters, making said pitch “somewhat easy” to an extent.

With an average speed of 98.3 mph and 56.7% usage among hitters against him, Chapman’s fastball was hit by opponents for a .306 batting average in 85 official at-bats during 2021.

Quite the contrary, as seen in 2020, where using the four-seam fastball with greater pronunciation and less speed, they only hit for an average of .095 in 21 at-bats, when he used said pitch 72.4% of the time. between his pitches and the speed of 97.8 mph.

For 2018, Aroldis Chapman used the four-seam fastball 65.9% of the time in his repertoire, a pitch that he was only able to hit for a low average of .185 after 81 official at-bats, with that pitch having a speed of 100.9 miles per hour. that looked like a meteor direct to the recipient’s pet.

In 2019 it was all the opposite, when Chapman would only use the fastball in 58.9% of his repertoire and the average speed of 98.0 mph, against which opposing hitters averaged .218 during 87 official at-bats.

What is this about?

The biggest single factor has been the break the player’s four-seam fastball takes coming to the plate in each of those years.

During 2021, Aroldis Chapman’s four-seam fastball had a horizontal break at the plate of 4.1 inches, while vertically it was 10.4 inches, only 1.3 inches more vertical break than the average pitcher. MLB who used the four-seam fastball during that season.

For 2020 it was the opposite, when the Cuban’s fastball generated 10.8 inches of horizontal fall, while the vertical break was 10.1 inches, better by 2.2 inches to the break of the fastball vertically than the league average in the mentioned harvest.

The explanation to being able to call “Aroldis Chapman’s fastball no longer scary” clearly depended on the naturalness of the pitch. The fastball is expected to be primarily a location and speed pitch, not a drop break, as vertical inches don’t tell.

The more vertical inches the fastball has, the more it is breaking, which is obviously not what you want from the pitch and is what the closing pitcher of the yankees has been failing, generating an obvious intermittency from one year to another.

Just as it was the most hit fastball in 2021, it was less deceptive, a year in which the Cuban only generated that 29.3% of the swings against the four-seam fastball were fanned, contrary to 2020 where 42.0% did. it was. The explanation is simple.