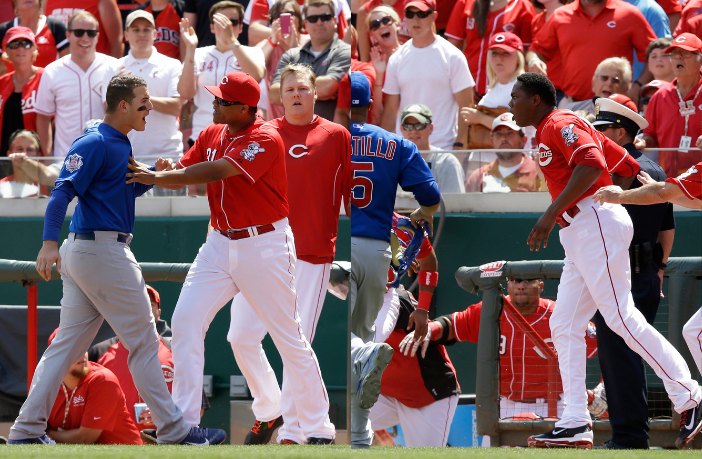 Anthony Rizzo and Aroldis Chapman fought back in a 2014 game between the Chicago Cubs and the Cincinnati Reds. The players, who in 2021 were teammates in the New York Yankees, caused the benches to be emptied at that time.

It all started when the Cuban threw two wild shots on the turn against Nate Schiertholtz, this in the ninth inning with the game tied 4-4. It was two 100 mph pitches that were over the player’s head. Chapman himself didn’t understand his bad repertoire on the mound of responsibilities, but the Cubs players in the dugout yelled some things at him. That turn culminated with a strikeout to Nate, but Aroldis Chapman looked challenging the visiting dugout, causing annoyance to Anthony Rizzo.

Discussion between Rizzo and Chapman

The top of the ninth inning ended and Chapman gestured to the Cubs’ dugout. Then, Anthony Rizzo, when he reached the first pad, had words with the Cuban. The first baseman tossed his hat and glove as he spoke to Chapman, who jumped out of the dugout to face Rizzo, but was stopped by his teammates.

The Yankees obtained Anthony Rizzo in the middle of the 2021 season, where he would live his second spell as Chapman’s teammate in MLB.

What happened in that quarrel?

During an interview for Complete Swing, Chapman recounted the “misunderstanding” in said emptying of benches. The Cuban highlighted not having any problem with a Major League player.

“At that time, the SS of the Cubs was Starling Castro, with whom I got along very well. I was in the booth and he was covering his position, we were practically speaking with signs. As I am waving at Castro, Rizzo sees me gesturing. Then he took off his cap and threw down his glove and went to the dugout to fight me », He told “The Cuban Missile” to Complete Swing.

Chapman came to the Cubs two years later, they won the World Series together, and on that day of the outbreak, everything stayed.

For interviews and all things Yankees, follow our podcast:
Bomber Week

If you have not yet subscribed to our blog, you can do so here:
Subscribe to blog by email

MLB: Discussion between Anthony Rizzo and Aroldis Chapman in 2014 (VIDEO)