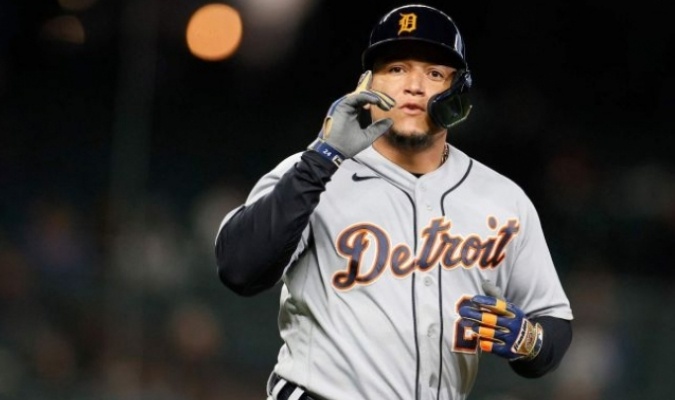 The race of Miguel Cabrera in the Major Leagues he has given for everything; There are few things that the boy from Maracay hasn’t been able to do on the main stage of baseball. This time we will review his numbers in opening games, regarding the tournament that begins this Thursday.

Also read: Miguel Cabrera and the home runs he is looking for to enter the historical top of the MLB

Miggy’s arrival at the Big Show took place in the middle of the 2003 season with the Florida Marlins, 2004 being his first Opening Day, on that day the fish received a visit from the Montreal Expos, and our protagonist was lined up as third slugger and right fielder; he finished the day 4-1 with a strikeout, his unstoppable hit in the eighth inning against reliever Luis Ayala, while his cast won 4×3.

For 2005, Cabrerita did better as third in the offensive order and left fielder against the Atlanta Braves who visited Dolphins Stadium. Against them he went 2-for-5 with a pair of runs and strikeouts; his hits came in the first and second innings, both facing the eventual Hall of Famer, John Smoltz and the Marlins won by shutout 9-0.

In 2006 luck was not on his side. As third and third baseman he went blank in four chances with a couple of strikeouts, one given by the starter Roy Oswalt and the other by striker Brad Lidge in the Houston Astros 1-0 win at Minute Maid Park.

That of 2007 would be his last Opening Day with the Marlins shirt, that day they visited the Nationals in the capital of the United States, his performance was extraordinary: 4.3, ticket in the first; double by impeller rules of 2 in the second; 2-RBI homer in the fourth, walk in the sixth and single in the seventh. His team won 9×2.

Already with the Detroit Tigers, in 2008 his debut in no way indicated what he would eventually do with this organization. That day at the Comerica Pak he was lined up as fifth and third basemen, going 0-3 with a strikeout in the Kansas City Royals’ 4-0 shutout.

Number 24 fared better in 2009, being the first baseman and fourth slugger; went 2-for-4 with singles against Roy Halladay in the fourth and Brandon League in the eighth. The Blue Jays thrashed in their 12×4 yard.

Also read: Miguel Cabrera and his foray into NFTs, what is this new venture about?

Against the Royals in 2010 he excelled again, going 2-4, walking, striking out and hitting in the sixth against Zack Greinke and in the 7th against Rob Tejeda. The Bengalis won 8-4 at Kauffman Stadium.

The house that Derek Jeter built was the scene of a new Open Night for Cabrera in 2011, that afternoon he went 1-2 with a pair of runs scored, 1 RBI, 1 walk and 1 strikeout. His unstoppable was in the second inning against the shipments of CC Sabathia. Yankees won 6-3.

2012 would be a World Series year for the Tigers, who began their action at home by hosting the Boston Red Sox. Ours who would make history in the end after being chosen the Most Valuable Player, did not connect hits but drew 3 walks as third and third baseman in the Bengali laurel 3×2.

By 2013 his final graduation as the Elder Tiger would come; that year he again was recognized as the Most Valuable and it all started in Minnesota. Again in position number 5 and third in the lineup, he went 0-5 with RBIs, runs scored and a couple of strikeouts, that race brought him in the first against Vance Worley, collaborating in the Tigers’ 4×2 victory.

Also read: Miguel Cabrera: Who would he beat in 2022 according to BaseballReference and Fangraphs?

His return to first base took place in 2014, where he played and lined up as third in the reception to the Royals; he went 1-for-3 with a walk. That hit was a double against James Shields and the cats won 4-3.

A nice reunion experienced the Venezuelan in 2016, since the inauguration of that year with the Tigers corresponded to carry it out against the Marlins; Facing his first team, Miguel went 1-for-5 with an RBI, a score he brought in the same opening inning against starter Wei-Yin Chen, indicating Detroit’s path to victory 8×7.

Against the White Sox in Chicago, he began the walk of the pack in 2017; there Cabrerita did not hit unstoppable and fanned the breeze 1 time in 3 at-bats, but he drew 2 walks and the Tigers won 6-3.

For 2018 Mr. Miggy had a great start, being ungrateful with the visit of the Pirates. He went 2-for-6, 2 teammates brought to the plate, 1 walk, 1 walk and 1 strikeout; those pair of hits were a single in the fifth and a double in the seventh against Iván Nova and Michael Feliz respectively, still Pittsburgh got the best part, 13-10.

The cold of the Canadian lands perhaps had an influence on the most dangerous Venezuelan player of all time, because in the opening of 2019, ours failed in 4 at-bats with a strikeout against the Blue Jays. The positive note is that the Tigers blanked 2xo.

In the midst of the peculiar 2020 season, due to the Covid-19 pandemic, the Tigers’ action began in Cincinnati. There Miguel Cabrera was third and designated, failing 3 times but getting 1 ticket. 7X1 was the score in favor of the Reds.

Also read: Miguel Cabrera, brands and figures at the mercy of the Elder Tiger (+Videos)

Not even the snow could appease the powerful maso del Tigre Mayor, who in 2021, went to the street against the Indian visitors, to round off a 4-1 day, scored and 2 RBIs in the 3×2 Bengali victory. That home run came in the same act 1 against the star of the tribe, Shane Bieber.

As we can see, during his career, Miguel Cabrera has not missed the appointment that begins a new cycle in the Major Leagues, the maximum stage of the sport of bats, gloves and balls.