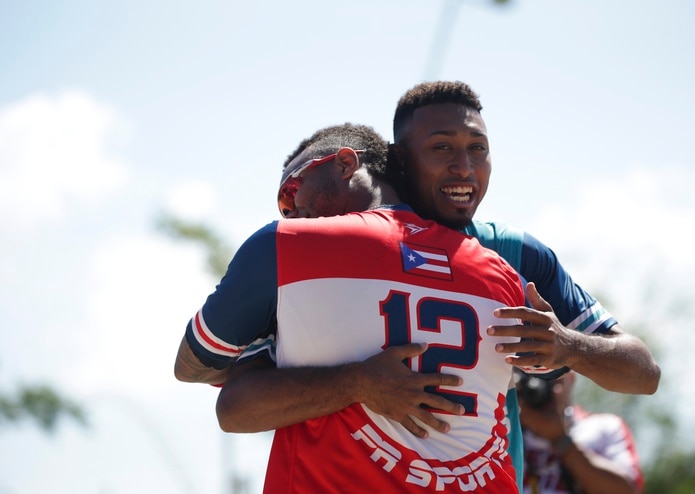 In January 2018, months after the passage of Hurricane Maria when many still did not have electricity, water or simply a roof in their home, Martin ‘Machete’ Maldonado decided to take on the task of holding a softball game that he organized with his fellow countryman and friend, Edwin ‘Sugar’ Diaz, a native of the Daguao neighborhood, to do his bit by helping his people, his neighborhood, those who love him since he was little.

And is that Martincito, as many have known him since his childhood, is ‘enchumbao’ from head to toe and with all his heart. So when he saw his neighborhood in pieces and his fellow townspeople suffering, he joined forces with Díaz to hold the event in the Jardines de Esperanza park, part of the urban area, whose lamp posts resisted the winds of the category four phenomenon but were almost in 45-degree angles, and the adjacent indoor basketball court was a huge pile of twisted metal and aluminum chunks.

It was necessary to help people to have a time of relaxation and with what they donated, help a nearby nursing home. And under the sun and with a thousand difficulties, this was done. Figures like Robinson Cano, Javier Báez and Yadier Molina, among other.

“I feel extremely committed to my people. Naguabo is the town that saw us grow up, where your friendships are, your family, the people you love since you were a child. Neighbors, cousins, people who studied with one “, reported the recipient of a Golden Glove by telephone.

“I don’t live in Naguabo but my parents do. And there are many things that the town of Naguabo has given me. So we always, in one way or another, look for a way to help, whether it’s sponsoring youth ball teams, which I know Sugar has too, or giving clinics to children and helping nursing homes. You feel the commitment to the people who gave birth to you, “added the receiver for the Houston Astros.

Due to his commitments in the majors, Maldonado travels to the island when baseball ends, and says he visits his town at least twice a week when he is here. Of course, first is to go see your mother, Janet valdez, and his father Martin Maldonado.

But he always makes time to visit childhood friends, to teach his children to people he appreciates and who were his neighbors since childhood, or to simply show his children the houses and streets he played around when he was just Martincito.

That nickname, he said, is the one most people use when they see him walking around town, although friends call him Machete.

“They know me better as Martincito. Everyone saw me there since I was little and that’s how they know me. Others call me Machete, and others congratulate me on my success in the Major Leagues, but they don’t see me as the player, they see me as someone they have known all their life, “he said.

One of his favorite parts of returning to his town is going to the beach and boardwalk area to savor the seasoning of his compueblanos and the fruit of the Naguabeño sea.

“I love Villa, where I grew up, but to eat I love going to the Makitos, the Makos, Ikakos, Benjy’s potatoes (Super Benjy’s Potatoes Taco & Grill) and even the pizzeria I went to when I went out. from school, ”he said.

Maldonado graduated from Dr. Juan J. Núñez High School and was drafted by the Anaheim Angels in the 2004 Draft. It wasn’t until September 3, 2011 that he made his major league debut with the Milwaukee Brewers. In his 11 seasons in the Major Leagues, he has also played for the Angels, Kansas City Royals, Chicago Cubs and the Houston Astros.

So whenever possible, he will continue to try to help his fellow townspeople with softball tournaments once the parks in the municipality are back in good condition. They are still affected since Maria.

The fact that the parks are not able to carry out a charity event like the one they want to do does not stop Maldonado in his mission to help others. It continues to do so, but on a personal and private level, without advertising.

“My mom taught me that when you help someone, you have to do it from the heart, not looking for recognition. And I have done so, ”Maldonado said. “And I really miss living there. But at my mom’s house I still have my room. That’s where I stay when I go to Naguabo ”.

Perhaps one day he will consider returning to the town where he was born and raised, but that is not yet. At the moment he thinks about the welfare of his children, but Naguabo has never left his heart.

“Naguabo is my childhood, my adolescence, it is where I learned to play baseball,” he said when asked to say what the town meant to him. “I learned everything I am today in Naguabo, it came out of Naguabo.”