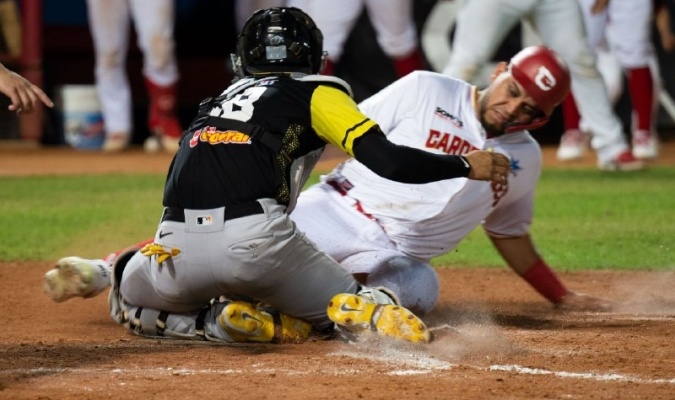 The Navigators of Magellan will play their last home game tonight in the Round Robin of the LVBP 2022/23 season, when they receive a visit from Lara’s Cardinals in a very important match, since the winner could play an extra game tomorrow, as long as the Tiburones de La Guaira are defeated at home by the Tigres de Aragua.

The “Turkish Ship” wasted two key opportunities to have destiny in their hands, after being defeated on Wednesday by the Tiburones de La Guaira, and being left on the field last night by the Leones del Caracas, thanks to a memorable homer from Harold Castro in the tenth inning.

On the other hand, the Cardenales de Lara had a lousy start to the Round Robin, placing themselves with a 3-8 mark that seemed to condemn them to elimination. However, the Twilights have woken up to a four-game winning streak, and are now very close to forcing a miraculous extra game.

The team led by Yadier Molina will have to shake off the powerful mental blow they received last night in Caracas, in a game in which the Magallanera offense went 15-3 in turns with men in scoring position. In addition, Magallanes will probably move his lineup, after David Rodríguez, the team’s third hitter, left a 9-0 line in the last two games.

On the part of the Cardinals, the spirit is completely opposite, since the crepusculares rose from the ashes to now be excited again with the possibility of getting into the Final Series.

Also read: LVBP: These are the combinations that could define the second classified to the final

The local team will rely on the performance of their ace, Erick Leal, who in this Round Robin was sensational in his first two outings (against Tigres and Leones), but then faltered in the remaining two (against the same rivals). Leal, who pitched on three days off last time, will have his proper four-day rest this time, so filibustering expectations are high.

This is how the table of positions of the #LVBP ðŸ‡»ðŸ‡ªâš¾ï¸ . The Leones del Caracas are the only team classified to the final, the Tigres are eliminated and Magallanes, Tiburones and Cardenales are still alive. pic.twitter.com/zBYM7ESaea

In Cardenales, the responsibility will be from Luis Lugo from Barquisimeto, who has only had one start in this Round Robin. Lugo took the mound on January 16 in Caracas, against the Tiburones de La Guaira, and had an acceptable performance of 5.0 innings, with five hits and two runs allowed. Lugo left the match with a partial victory, but the relief in the ninth inning cost him the victory.

Magallanes will have to shake off the bad offensive streak of their last two games, in which the electricians have scored just two runs in 19 innings. Renato Núñez (Round Robin bat leader with .400) and Robinson Chirinos (.357), are the ones called to carry the Magallanera offense.

On the other side of the sidewalk, Lara hopes to continue having the best version of Hernán Pérez, who went 2-4 yesterday with an RBI, and who has posted an excellent .355 average so far in the postseason, being the spark plug. of the team in January together with Pedro Castellanos and Odúbel Herrera.

The meeting will start at 6:30 PM at the José Bernardo Pérez Stadium in the city of Valencia, and both teams will undoubtedly be very attentive to what happens with La Guaira in Caracas.

LVBP: Magellan and Cardinals to leave everything in search of the miracle (PREVIEW)