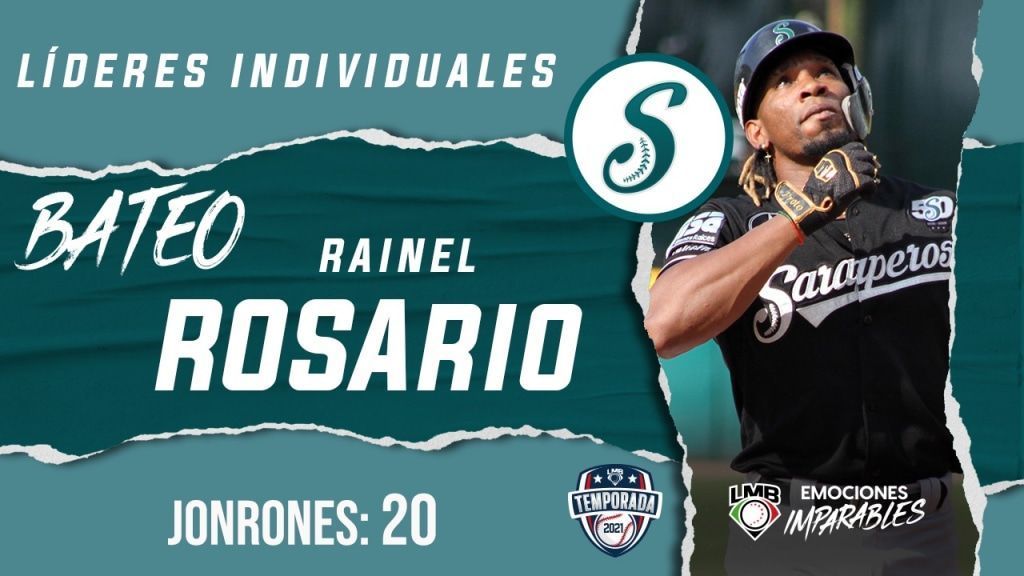 MEXICO CITY – Rainel Rosario, left fielder for the Saraperos de Saltillo, hit 20 home runs, finishing as the leader in this statistic in the 2021 season of the Mexican Baseball League (LMB).

Rosario won his second home run title in the LMB, the first was in 2017 when the ball disappeared 26 times.

Rainel Rosario also led the season in extra-base hits with 41, of which were 20 home runs, 18 doubles and three triples.

The Dominican led Saltillo’s powerful offense, the second best on the circuit with a collective batting percentage of .308, and helped his team finish in third place in the north zone with a record of 36 wins and 30 losses.

In the first playoff series, the Saraperos will challenge the champions Acereros de Monclova, who finished fourth in the north with 35 wins and 31 losses.

Another outstanding Dominican in the LMB was Leandro Castro, left fielder for the Tijuana Toros, who led the season in RBIs with 72.

Castro was key for Tijuana to finish second in the north with 40 games won and 25 lost. The Bulls will face the Rieleros de Aguascalientes in the postseason.

Among the Venezuelan batters, Alexi Amarista, second baseman for El Águila de Veracruz, shone. The member of the national team in the last qualifier for Tokyo was the second player with the most doubles shot with 20.

Amarista was also the fourth player with the most extra-base hits, hitting 35, his 20 doubles, 14 homers and a triple, totaling 90 hits in 59 games.

Among the Latin pitchers, Colombian Luis Escobar, from the Olmecas de Tabasco, shone, who proclaimed himself the leader in ERA with 2.54 since in 67.1 innings worked he only allowed 19 earned runs.

Escobar will be the main letter in the pitching of Tabasco, which by finishing second in the south will start the ‘playoffs’ against the Pericos, fifth in the zone table.

Dominican Fernando Rodney, a 2019 World Series winner, was the best closer in his LMB debut, scoring 16 saves in 19 chances with Tijuana.

The Mariachis de Guadalajara were the best team in the north with 46 wins and 17 losses. The Red Devils of Mexico led the south with 41 victories and 23 defeats.

The first postseason series will start on Saturday with the duels in the northern zone of Unión Laguna-Guadalajara, Aguascalientes-Tijuana and Monclova-Saltillo. In the south they will face Quintana Roo-Mexico, Puebla-Tabasco and Veracruz-Yucatán.