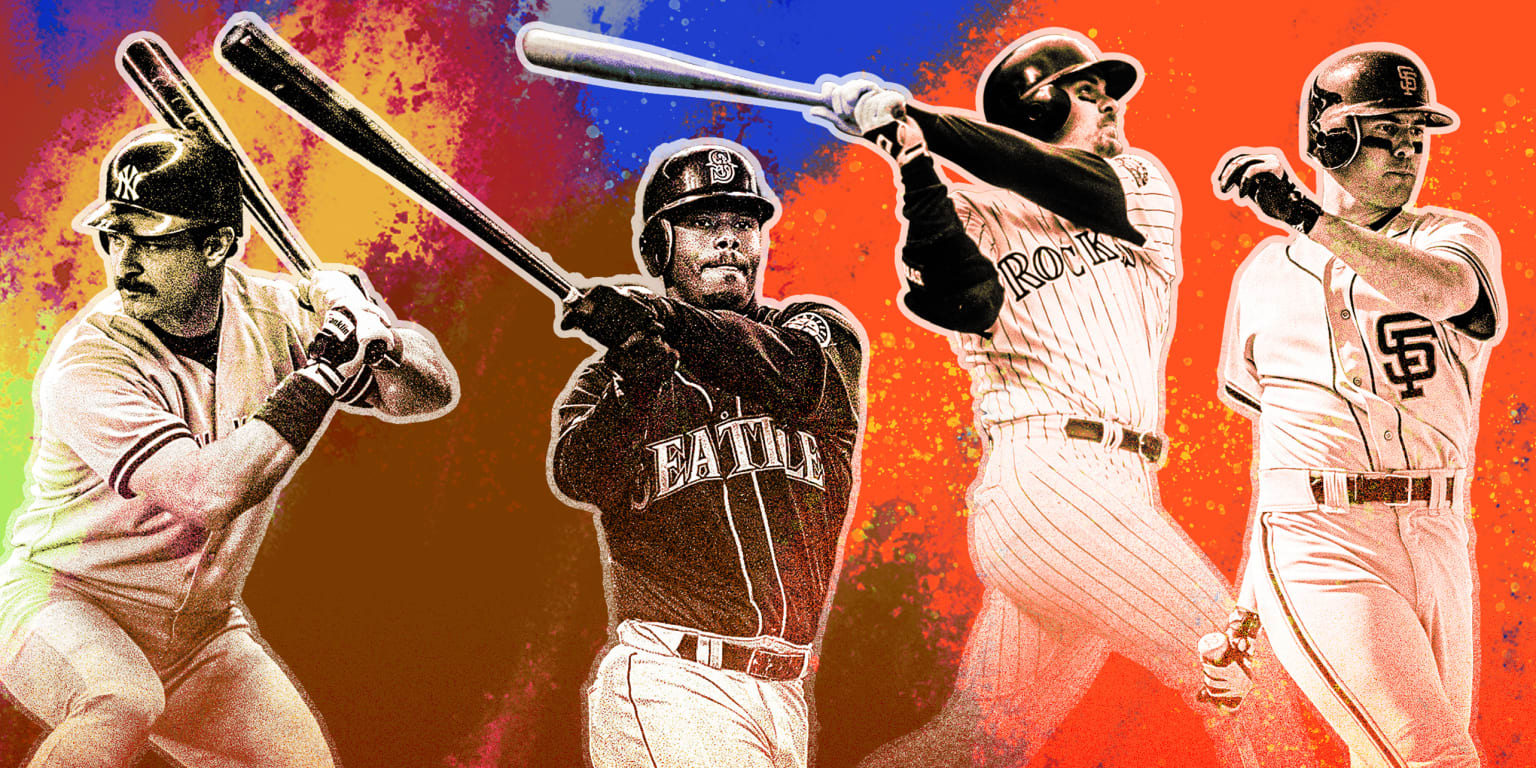 One day in September 1988, Braves slugger and two-time National League MVP winner Dale Murphy had no answers. He hadn’t hit a hit in almost a week and couldn’t find his way out of the slump he was in.

While trying to adjust his swing mechanics, Murphy watched the Giants game on television. At bat was San Francisco first baseman Will Clark. Without taking his eyes off the screen, Murphy got into batting position.

“He told me that he stood by watching television,” Clark said. “And that, although he was upright, he watched my swings and tries to imitate them while watching TV.”

“That’s the biggest compliment of all, when another professional is trying to copy you.”

Murphy was not the only one. Clark, one of the best sluggers in the big box in the late 1980s and early 1990s, had one of the most beautiful swings in baseball history, a fluid stroke that drew comparisons to that of Stan Musial.

But as great a hitter Murphy may have been, he couldn’t match Clark’s swing, partly because of the perfect flow, but also because Murphy was hitting right.

The question has puzzled players, coaches, and fans alike since the game has existed: Why do the most beautiful swings seem to come from left-handed sluggers?

“I don’t know why lefties look … more fluid, for lack of a better term,” Clark continued.

He is not the only one who cannot find an explanation.

“I don’t know,” said former Yankees slugger and current Marlins manager Don Mattingly, whose spectacular swing from the left side earned him the nickname “Hit Man.” “It just looks different, but I don’t know exactly why.”

“I’d like to give you a good reason,” said Hall of Famer Larry Walker, who owns a left-handed swing that produced 383 home runs during a 17-year career with the Expos, Rockies and Cardinals.

“I don’t know why,” replied another former Rockies player, Venezuelan Carlos González. “It’s like it just looks more natural on the left side.”

Fred Lynn, another naturally swinging southpaw who won the American League MVP in 1975, didn’t have an answer either.

Lynn, Mattingly, Clark, Walker and González are members of a fraternity of left-handed hitters who have captivated us throughout history with the beauty of their swings. There are many others, including Ken Griffey Jr. – who had perhaps the sweetest swing of all – Ted Williams, Keith Hernandez, George Brett, Tony Gwynn, Mark Grace, Rafael Palmeiro of Cuba, and many more.

Although no one is able to find the perfect explanation to understand the phenomenon, that has not prevented people inside and outside the game from offering their own theories.

“Maybe it’s simply because there are more right-handed hitters than left-handers,” Walker noted. “So when a southpaw comes to hit it’s less common, and that in turn makes the swing look better.”

González, whose fierce way of attacking the ball was a perfect combination of violence and ballet, agrees that the weirdness factor plays a role.

“When you have so many right-handed hitters, everything becomes normal with them,” CarGo explained. “But when someone like Griffey comes out, who really impacted the game, with his cap backwards and that beautiful swing, the way he dropped the bat, I think that captivated everyone. That is the reality: that it is not common is what catches everyone ”.

When he was a child growing up in Maracaibo, González begged his mother to let him stay up watching the games of Venezuelan players like Freddy García and Carlos Guillén of the Marineros. And he also saw enough of Griffey to start mimicking his legendary swing.

“All they saw of me is because of Griffey,” revealed Gonzalez, who won a batting title, went to the All-Star Game three times and took two Silver Bats for Colorado. “Every time there was a picture of him in the newspaper, or a magazine, I would cut it out and stick it on the wall to imitate his swing. That’s how it all started, and over the years I made my own adjustments, and well, that’s how my hitting mechanics was born. “

Gonzalez said one of the most crucial elements of his throwing was the amount of time his bat spent over the hitting zone. The course was made to maximize the bat’s stay in that critical area, allowing him to hit even when he was cheated on a pitch or thrown late to a fastball.

Clark agreed that this, too, was a huge ingredient in his own success.

“I was always more concerned with keeping the bat on the plane of the ball,” Clark said. “All good hitters talk about it, about staying on the same level, because that way your timing doesn’t need to be perfect. You can give it a little late, on time, a little ahead, but you always have a good chance of hitting it. “

Could that be part of the reason we love left-handed swings so much? What tend to leave the bat more on the good zone, making a more attractive movement?

“I’ve thought about that,” said Lynn, the only man to ever grand slam in an All-Star Game, hitting the Giants’ Atlee Hammaker down right field in Comiskey Park in 1983. “You see a lot of pitchers. rights, lots of slow, breaking pitches, especially if you can hit the fastball. You have more time to see the ball. When I was facing left-handers, you have less time because you don’t see so well and that’s why you also rush a little more with the swing ”.

Mattingly said he thinks that while left-handed hitters definitely have some natural advantages, the driver isn’t sure if that can result in a beautiful swing.

“As a left-handed hitter, you face more rights in your life,” Mattingly said. “That is definitely an advantage. But I think the swing mechanics are the same for both sides of the plate. If you look at a boy like [el dominicano] Manny Ramírez and then you compare him to an excellent left-handed hitter – the mechanics will be very similar, like when he rests his foot and when the bat passes through the zone ”.

So if the mechanics of the swings are similar for both left-handers and right-handers, why does the left-handed one look more beautiful?

There is another theory that has circulated in the past, one that could be key to answering our big question: Left-handed hitters can naturally step to first base after completing their swings, while right-handers have to flip their hips again. toward home plate to start running toward initial.

“I’ve never seen it that way,” Mattingly declared. “That is very interesting, because it is true. Because a right-hander hits him and somehow he has to think about getting out of the batter’s box, and a southpaw hits him and he’s almost coming out. “

If anyone knows every block well, it’s Gar Ryness, aka “Batting Stance Guy” on Twitter – baseball fans will have seen Ryness do excellent imitations of various blocks in baseball history. He has also thought about the issue.

“Good question,” Ryness said. “If you think about where a swing ‘should’ end, the left-handed hitter is closer to running to first base. The right hitter should abruptly stop his beautiful swing and start running.

Will this theory be valid? If baseball were played the other way – in other words, if the batter had to run to third base, rather than first – would it be the right-handed batters who had the most beautiful swings?

Believe it or not, in the early days of baseball people ran to the opposite side. According to Robin Carver’s “The Book of Sports,” which was published in 1834, the “rounders” rules, an early version of the modern game of baseball required running from left to right.

Since we can’t look at what was done in 1834, we need some modern technology to see what it would look like to play that way, and most of all, what left-handed hitters would look like running to initial after their swing as right-handers running to third base. Can it still qualify as a beautiful swing?

Let’s start as the one who could be the “King of Swing”: Griffey. If we flip the image to the video below, we see that Griffey’s inimitable swing is just as beautiful if he were right before heading to first (or third) base. It seems like the natural move immediately going into his home run trot works from both sides.

We noticed the same phenomenon with Clark’s swing – the reversed image, in this case of Clark’s grand slam in the 1989 NL Championship Series against the Cubs, and it looks just as beautiful from the right side of the plate.

Mattingly had a beautiful swing, but back problems forced him to hunch when he came out of the batter’s box. Other than that, the reversed image is the same as far as your swing is concerned.

Now let’s look at the opposite situation – does a right hitter look better from the left side of the plate with the image reversed? Who would we invest in in that case?

“There are some rights that you look at them – like Edgar Martinez,” Clark said. “I always think that’s a spectacular swing from a right hitter.”

When Clark identifies a beautiful swing, you need to pay close attention. So let’s look at Martinez, whose swing is as smooth as silk, if he were left-handed.

As you can see, Martinez has a beautiful swing with the video reversed, but the “soft factor” is interrupted as his feet move toward initial. The flow stops, as Ryness pointed out.

What is the conclusion?

It seems that several factors are taken into account so that the most beautiful swings occur mainly from left-handed hitters. This group of sluggers is rarer – even in other sports, lefties are thought to be more stylish than right-handers. In the case of baseball, many lefties have longer swings in the zone because they have a fraction of a second more to see a pitch by a right-hander.

But the most compelling theory seems to be that lefties seem to almost skid out of the batter’s box and transition to their trot to first base. The video evidence proves it, and in an alternate universe where the base run is the other way, we would still be impressed with the swings of the same players, as we are now.

Lefties have always been the minority in this world. But when it comes to baseball, they’re special – that’s why left-handed pitchers tend to have longer runs than right-handers. The explanation for that fact is a bit clearer as to why lefties have beautiful swings.

We may be closer to the answer. In any case, we will continue to enjoy the pleasure of seeing the excellent left-handed swings.

“It’s a world of rights,” declared Lynn. “There are few left-handers. But in baseball, when you see a left-handed swing, you are blown away. “

Lefties stand out for having a more beautiful swing