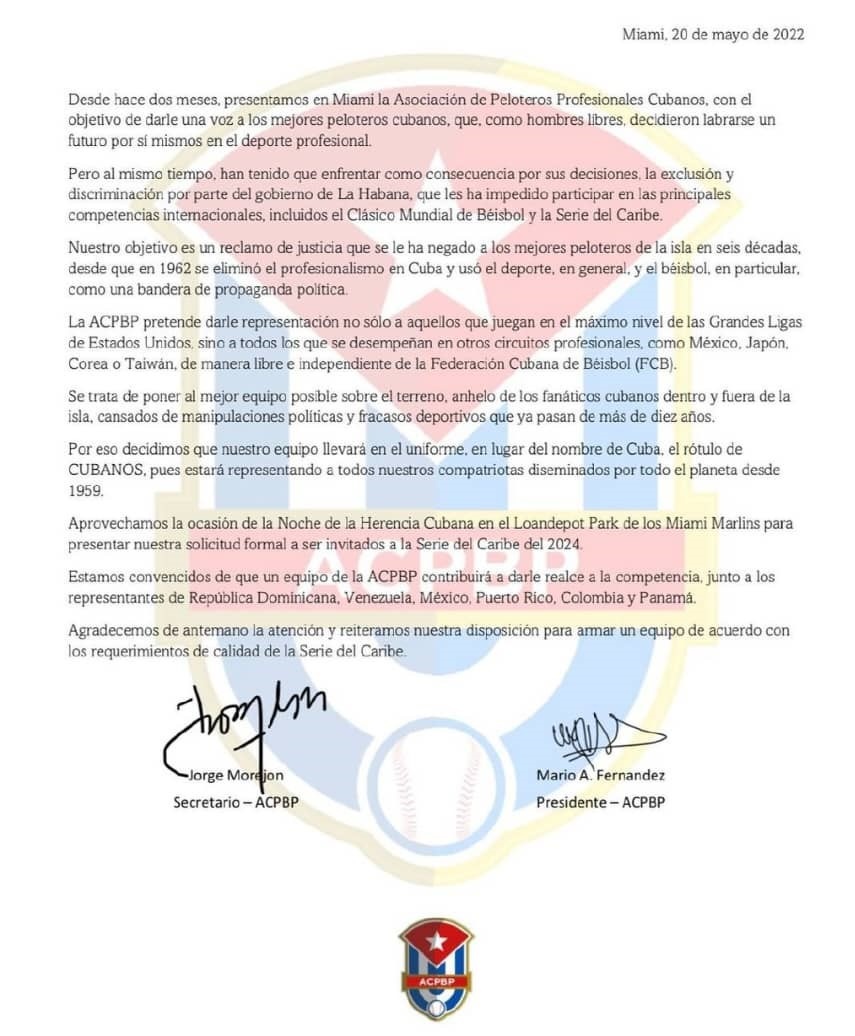 The Association of Professional Cuban Players (ACPBP) announced today, Saturday May 21, important news for all fans of Cuban baseball, the result of their constant work in these more than two months of creation.

It may interest you: LAST MINUTE: From Mexico THREE CABALLOS joined the Association of Players

As posted on his Facebook page«taking advantage of the Cuban heritage day, our Association of Professional Cuban Players today presented the Marlins with an application to participate in the 2024 Caribbean Series, which will be held in the city of Miami»

Due to the importance of this fact, we fully share the text of the request, which was signed on May 20, 2022, by Mario Fernández and Jorge Morejón, President and Secretary, respectively, of the ACPBP.

“Two months ago, we presented the Association of Cuban Professional Baseball Players in Miami with the aim of giving a voice to the best Cuban baseball players, who, as free men, decided to carve out a future for themselves in professional sports”

“But at the same time, as a consequence of their decisions, they have had to face exclusion and discrimination by the government of Havana, which has prevented them from participating in the main international competitions, including the World Baseball Classic and the Caribbean Series. »

It may interest you: LAST MINUTE: 3 CABALLETES joined the Association of Cuban Players from KBO

“Our objective is a claim for justice that has been denied to the best baseball players on the island in six decades, since professionalism was eliminated in Cuba in 1962 and sports, in general, and baseball, in particular, were used as a political propaganda flag»

“The ACPBP intends to give representation not only to those who play at the highest level of the United States Major Leagues, but also to all those who play in other professional circuits, such as Mexico, Japan, Korea or Taiwan, in a free and independent manner. of the Cuban Baseball Federation (FCB)»

“It is about putting the best possible team on the field, a desire of Cuban fans inside and outside the island, tired of political manipulations and sports failures that have already passed for more than ten years”

“That is why we say that our team will wear on its uniform, instead of the name of Cuba, the CUBANS label, since it will be representing all our compatriots scattered throughout the planet, since 1959”

It may interest you: ATTENTION CUBA: Association of Baseball Players LAUNCHES STORE

“We are convinced that a team from the ACPBP will help enhance the competition, along with representatives from the Dominican Republic, Venezuela, Mexico, Puerto Rico, Colombia and Panama”

It may interest you: IT HAD TO BE SAID AND IT WAS SAID: That the Cuban ball NOT BE just another weapon of politics