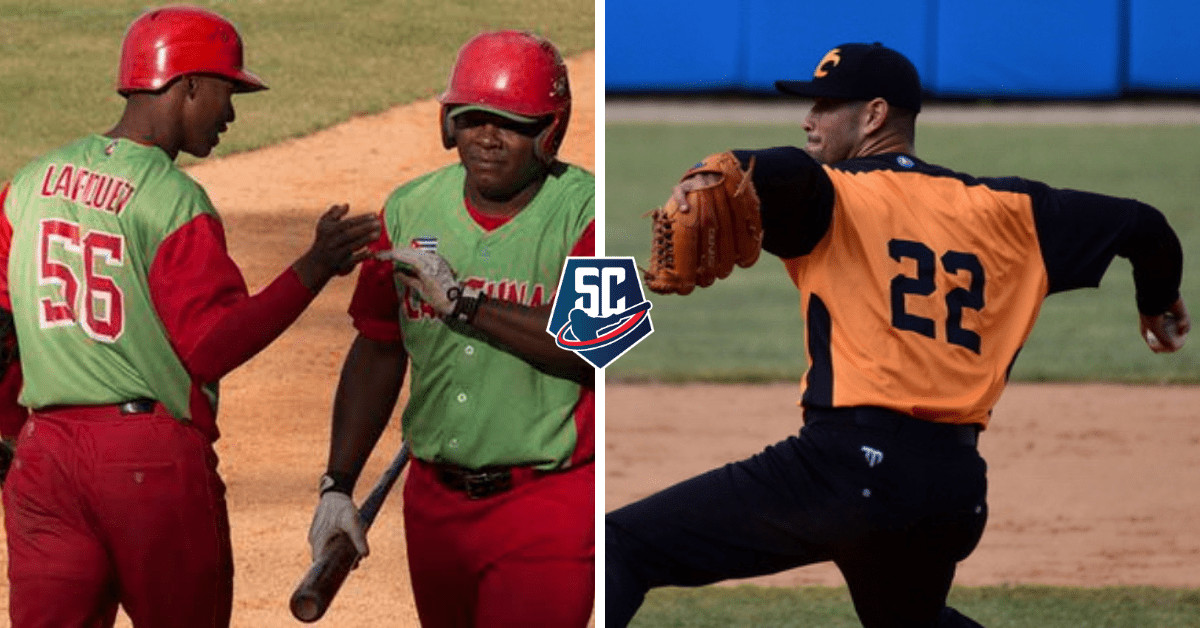 A high-tension Sunday afternoon was the one experienced in the 61st National Series, with excellent duels between Las Tunas and Matanzas and Hurricanes and Bulls. On the other hand, the Guantanamo people took revenge on the pineros and the people from Villa Clara did the same with the Gallos, to maintain their winning pace in the current harvest. A record for a game in the National Series was equaled on the day.

With Larduet’s record and decisive pitch, the Lumberjacks swept the Crocodiles

In a heartbreaking match, decided in eleven innings and in the most unexpected way possible, Pablo Civil’s Leñadores completed the weekend broom against Matanzas Crocodiles and defeated them 4×3. Carlos Juan Viera threw again in relief and did it excellently, while Yuniesky Larduet equaled the record for the most stolen bases in a game with six, emulating what was achieved by his countryman Ermidelio Urrutia, the Orange Explosion, Víctor Mesa and Matanzas player Joseph Estrada.

The Yumurinos took control in the same first inning due to consecutive singles by Yadir Drake and Javier Camero, but Las Tunas countered in that same episode with a two-run double by Yosvani Alarcón, driving in Quiala and Larduet, the latter with his first two steals. pm.

Larduet was once again key in the third run for Las Tunas, once again stealing second and third base, to finally score, led by Yordanis Alarcón with a single to center field. Matanzas matched the actions between the fourth and fifth innings in which the decisive shots from Andrys Pérez and Jefferson Delgado were shot.

The clash’s starters, Yoanni Yera and Yudiel Rodríguez, went without a decision but did so effectively for seven and six innings respectively. The left-hander from Matanzas struck out 10 rivals and reached 41 in the season, leading the championship.

Carlos Juan Viera worked four innings in an excellent way, with a couple of hits allowed, three strikeouts and a walk, but he couldn’t have a decision, because the tie lasted until the eleventh inning.

After a big zero by Yasel Labrada and the departure of Naykel Cruz, who remained in the box for three innings after Yera’s departure; Las Tunas took advantage of a wild pitch from the recently entered Haykel Cruz, a ticket to Oberto Coca and a dead ball to Héctor Castillo from Denis Quesada, who had expressly entered to pitch to the left-hander from Las Tunas, to define the actions and arrive for the first time in the season , to an even balance of wins and losses, with 15 successes in 30 games played.

Pedro Jova’s troops recovered from the defeat suffered on Saturday and with a great combined pitching by Elier Carrillo and Randy Cueto, they annulled the Gallos’ offense and took the victory with a 5×1 scoreboard. A key factor in the final result was the poor defense of Sancti Spiritus, which with three balls made the work of their pitching staff more difficult.

In the game, a couple of home runs were connected, both with clean bases and both from Villa Clara; the fourth of the veteran Yeniet Pérez and the first of the gardener Juan Carlos López. Both left with a pair of hits in the clash and together with Leandro Turiño, 3-2, with a pair of runs scored, the same number of doubles and an RBI, were the cornerstones of the Leopards’ batting.

Elier Carrillo (5-1) worked six innings, they made him the only one of the match, allowed only five hits, struck out four and gave away a couple of walks. The task was concluded by Randy Cueto, taking the last nine outs of the match, enduring only a couple of hits, striking out two and not giving away walks, thus earning his fourth save of the season.

It may interest you: Roosters STOPPED Villa Clara’s streak with Cepeda and Mendoza as protagonists

The defeat was due to starter Yoanni Hernández (0-1), while Dismani Ortiz, 4-2, was the best batter of the match for Eriel Sánchez’s troops; who suffered his 14th loss in 29 outings, while those in orange and black won for the 18th time, also in 29 appearances.

The Hurricanes came back and swept the Bulls

Distributed offense, great replacement by Jaime Gámez (1-0) and combined close by Mario Batista and Alyanser Álvarez, to get the last three outs, were the highest points for the Hurricanes to overcome a 5×0 deficit and defeat the bulls by Miguel Borroto with a closed 7×6 board.

A total of six batters from Mayabeque hit more than one hit, headed by Lázaro Martínez, 5-4, with an RBI and two runs scored, and Dennis Laza, 4-3, two of them from Tubey, with an RBI and a run scored; as well as Javier Carabeo who drove in a couple of runs for home plate.

After an unfortunate opening by Mailon Cruz, Jaime Gámez appeared in an impassable way and for 4.2 innings he stopped the Camagüey’s offense in its tracks and only two opponents reached base, one by hit and another by walk, he struck out two and allowed a clean one.

After his great work, he left the scene clean so that the efforts of Mario Batista could be combined, who got the first two outs of the ninth but left the tie at second; and Alyanser Álvarez, who despite giving away a walk, managed to dominate emergent Jorge Cardosa in rolling to second, which served to force Leonel Moas Jr. into second with the last out of the clash and thus scored his first save of the season.

A huge Over Cremet guided the Indians to victory

A ferocious offense from catcher Over Cremet, 3-for-3, all extra-base hits, a pair of doubles and a home run, with the bases loaded and his sixth of the season; six RBIs and one scored; it was the key to Guantanamo’s success over the Pirates with a score of 9×1; to thus reach 10 wins in 30 games and deal the pineros their fifteenth defeat, also in 30 outings to the grass.

The other key was the great relief of Orlandis Martínez (1-1), of 4.1 innings, in which he did not allow annotations, they connected four hits, he struck out and gave away a walk. The starter Pablo Aníbal Salgado was one out away from taking the victory, but his lack of control in the bottom of the fifth, bowling Jhony Hardy and Luis Felipe Rivera, caused Agustín Lescaille to make the decision to remove him from the box, when the clash was 4 ×1 and the tie was in circulation.

Luis Jairon Hechavarría also dropped the ball, his first homer of the season, while Leonardo Urgellés, 3-2, and Eliseo Rojas, 5-2, were the best hitters for the losers.