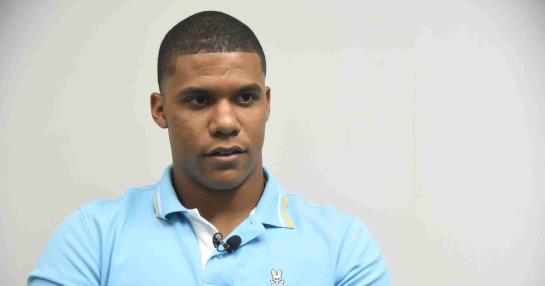 Yes OK John Soto he began to show his abilities early in the little leagues when he reached the critical age to enter the process where the teams close the signings he had to make what he considers the greatest sacrifice of his life and from there he discovered the talent that he had hidden.

Soto He played in the Los Vecinitos league and his coach, Rafael Zapata “Papé”, did not have the structure to develop talents to the point of putting him at the level that the teams are looking for, so he transferred him to the Cristian “Niche” Batista program. The league’s other gem, Gilberto Celestino, took him to coach Amaury Nina, who ran his academy at the San Isidro Air Base.

The family of Soto He resisted leaving school at the age of 14, so he had to get up early to get from his home in Herrera to Villa Mella before the sun’s rays fell where he trained with Batista.

“What marked that takeoff? The pot (laughs). When I got to Niche there were good times, I’m not going to lie to you, they were hard times, but in the end they were good, there was a lot of learning, I went to Niche every day taking public vehicles and until one day I told him , ‘hey, I can’t take it anymore, you’re the one who knows, I need to go to the boarding house and stay at your house because I can’t take it, the tiredness, plus the ticket, plus the late nights I had to spend,'” he said Soto.

It was with Batista that he finished polishing his tools until he convinced the Nationals to give him a US$1.5 million bonus in July 2015. For Celestino, the Astros paid US$2.5 million.

“I had to get up at five in the morning, leave my house at half past five, so it was a hard moment, Niche told me ‘well, let’s do it’ and helped me, you know, the whole process of contracts and everything else. He helped me, he put me in his house and from there when I entered that house I knew I had a goal, I had a plan, I did not go to do anything else, I went to find what I wanted, “he said Soto.

“At that time they knew that I had good control of my bat and my arm and everything, but until then they were still a bit doubtful because they actually had nine prospects above me who were elites,” he recalls.

Training with his back to the polluted Isabela River, in the Club Payero play, Soto He worked his way through the exhibitions until he convinced teams that he was the hitter with the best strike zone control in his class.

Juan Soto: “The pot I had brought out the best in me to sign”