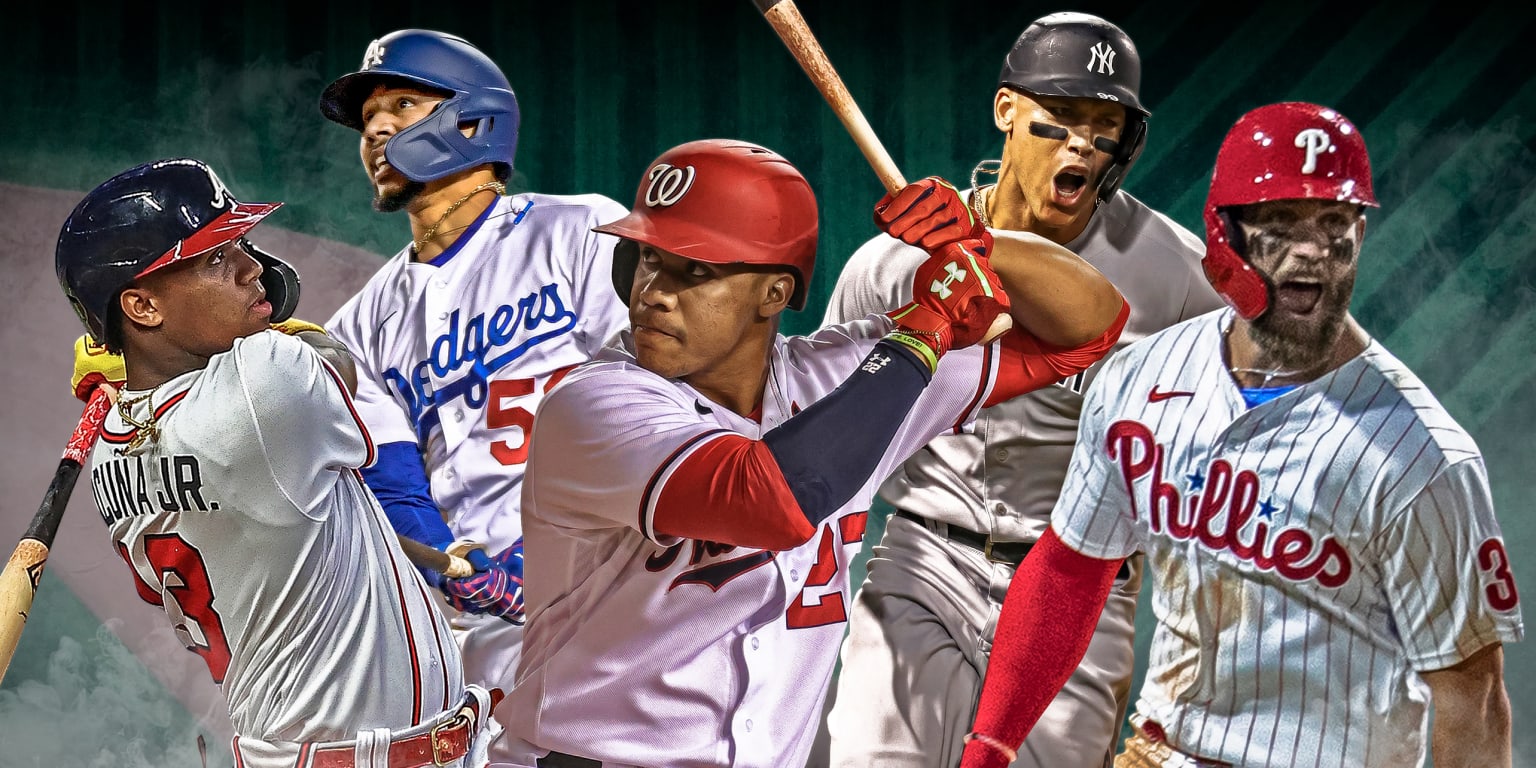 Each year, MLB Network prepares several specials before the season called “The Top 10 Players Right Now”, in which it is analyzed who are the most outstanding in each position. The most recent, on the top 10 right fielders, premiered Wednesday night. Now at MLB.com we want to keep the discussion alive with a panel of experts — Mark Feinsand, Sarah Langs and Mike Petriello — who explain their rosters and what they think about where the position is today.

Andrew Simon, moderator/editor: They all placed Dominican Juan José Soto at No. 1. Did any of you have a hard time making that decision? Or was it one of those very simple decisions?

Mike Petriello, Chief Statistics Analyst: My only concern was if putting him at No. 1 was too low for him.

Mark Feinsand, executive reporter: For me there was nothing to think about. Soto has a case for being considered the best player right now regardless of his position, so putting him top right fielder was easy. Which is still impressive because there is a lot of talent in right field.

Sarah Langs, reporter/producer: Very easy. The best hitter in baseball is the best player whatever position he plays.

Petriello: I have a list of notes that I made for each player for this exercise, and in his section, highlighted in red, I put: “He’s the perfect hitter.” And I really think it is.

Simon: All right, case closed. While we’re on the subject, does anyone want to drop a prediction on Soto’s numbers in 2022?

Feinsand: Predicting numbers, for me, is a waste of time. But I can safely say he should lead the majors in OBP, hit over .300 and hit 30 to 40 home runs as long as he stays healthy.

Langs: I expect him to lead the Majors in OBP again, which would be his third year in a row doing it, and I also anticipate a second batting title.

Feinsand: Sarah, is it a good thing to be compared to Ted Williams?

Langs: Confirmed, according to investigations.

Petriello: I remember very well when everyone started to get nervous when we started making the comparisons between Ted Williams and Soto in 2018, 2019. How are we feeling now?

Feinsand: I think the problem with the Williams comparisons at the time had more to do with Soto’s age than his ability. It is not easy to put that weight on a 19, 20-year-old boy. He is living up to all those expectations, though.

Simon: Let’s move on to an area where there are at least some discrepancies: Venezuelan Ronald Acuña Jr. Sarah, you put him second. Mike and Mark, you guys have it from fifth grade. How much of that is because he’s coming back from major knee surgery?

Petriello: For me? Everything. This is not a list of, “Best RFs for the next five years. It’s only for 2022, and the Top 5 is full of pure horses. When we did these rankings in early January, I didn’t know if Acuña would be ready for Opening Day. I don’t know if they’re going to take it easy and give him one or two days off a week. I’m not worried about its production, just how much it will be used. If it was 100%, it would be in my top three.

Langs: Perhaps I was too optimistic. I admit that my first thought was for Ronald Acuña Jr. in the first half, and just hoping he’s still an MVP candidate from now on. As well as power and speed, improving his eye on the bat and good defense, too.

I also heard that Mickey Mantle played most of his career with a torn ACL, and I see Acuna’s stories on Instagram about his progress with his workouts, so maybe all of that convinced me.

Feinsand: No disrespect to Mantle, his game was different from Acuna’s.

Langs: Of course — speed was not its first component.

Feinsand: I imagine Acuña being unanimously in the top two a year from now. But for 2022, it’s hard not to factor in the knee injury to some extent. And it’s not like he’s behind a group of a bunch of unknown players.

RAJ is definitely in that first group.

Langs: Exactly — this position is brimming with talent.

Feinsand: Agree. There’s no shame in being fifth on this list right now, especially after a serious injury.

Simon: Let’s talk about it. Bryce Harper will be third in these lists. Mookie Betts up to fourth. Aaron Judge down in sixth place. All three are superstars. Is this the best position in the Major Leagues? Or at least the best top five?

Feinsand: I think it’s a battle between right field and short stops.

Langs: Agree! That’s how I felt filling these lists.

Petriello: Pitching aside, yes, I agree with Mark.

Feinsand: Well, pitching is something else entirely. You just like to take me the opposite.

Petriello: I do not agree with that.

I was shocked, a little, by the decision of where to place Betts. He’s coming off a 128 OPS+, 23-homer season and we know he did it with a sore hip, and it just feels like a huge disappointment. That’s not to be disrespectful, but proof of how high our expectations are.

Simon: There was a feeling that it never got to carburettor last year, and yet I still had a season that many would like. Do you think anyone is capable of doubling their 2018 cap?

Petriello: Turning 30 this year (in October), it already seems like the days of 20 or more stolen bases are behind him.

Langs: I was concerned that I was leaning too much into the recency in his case – winning Game 5 of the NLDS against the Dodgers is pretty much just Mookie at his best. And as Mike points out, he had a very respectable season with an injury, and we’re still somewhat disappointed. So I tried to look at that Game 5 as evidence that he’s still capable of being the Mookie we hope to see. Although it will never be the same as 2018.

Petriello: I mean, I’m here pointing out all of his flaws and yet I still have him at No. 3 on a big list.

Feinsand: As I said with Acuña, if you’re in the top five on the list, you’re doing something right. Betts trails Soto (best player in all of baseball) and Harper (last NL MVP). Nothing bad.

Simon: I don’t want him to get lost in the crowd, so we need to recognize the talent of Kyle Tucker. He doesn’t have the high profile of the guys before him, but he was a big breakout last year. Is it possible for him to move up the list this year?

Petriello: Anything is possible, because he’s only 25 years old, and he was the best hitter in a very good Houston team in 2021, and nothing he did was a fluke. But for him to move up to the top 5 it seems that he is almost out of his hands, for example, that one of the Big 5 has a reason for him to go out, because of his history.

Feinsand: It is very possible. Judge hasn’t had the ability to stay healthy, and honestly, we don’t know if he’ll be with the Yankees a year from now. Does anything change if he moves to a ballpark that favors hitters less?

I’d say Judge is the most likely candidate to go for those reasons. But he could also hit 50 home runs, sign a mega-contract with the Yankees and move up a spot or two.

Langs: I think that’s a great possibility — although of course he depends much more on the others than on himself. But nothing he did was dumb luck, all backed by quality contact, early stats and good defense as well. Some of this impressive depth and talent here.

Petriello: We had the same first six, but in a different order, right? It seems clear that there is a big gap between Tucker and the rest, at least from my point of view.

Feinsand: I agree with you Mike. The levels were 1-5, Tucker, and then the others. For me Hunter Renfroe is 10th, but it could easily have been 3-4 other guys.

Simon: What was the player that hurt you to leave him completely off the list?

Feinsand: He didn’t know whether to give the last spot to Renfroe or Mitch Haniger. The latter had a fantastic season in 2021, but it was his injury history that made the difference.

Langs: I considered including Renfroe, but in the end I had to leave [el venezolano] Avisail Garcia from 10th. I also had Haniger in mind.

Petriello: I had 3-4 that “barely got out” and the first one was Dylan Carlson, because he is so young (just 23 years old) and coming off a solid campaign, it wouldn’t be hard to see him get a big promotion in 2022. In the end, I decided for something safer in [el cubano] Randy Arozarena, but would have picked Haniger, Randy, Carlson in any order for 9-10-11.

Feinsand: I also love Randy Arozarena, but I can’t justify putting him higher than seventh. Like I said, it’s a figure position.

Simon: Let’s end the talk with something fun. Who would be someone that no one here put on their list that would make everyone look bad in November? Mike, it looks like Carlson is your answer.

Petriello: Carlson, but could also see Michael Conforto come back with an excellent campaign.

Langs: I think Carlson — I wrote his name first while I was getting ideas, but in the end he hasn’t done enough to make my top 10. But he has great potential.

Feinsand: Carlson is a good choice. I would choose [el cubano] George Soler. I have a feeling he will have a great year in 2022.

Is the RF the strongest position of GL?