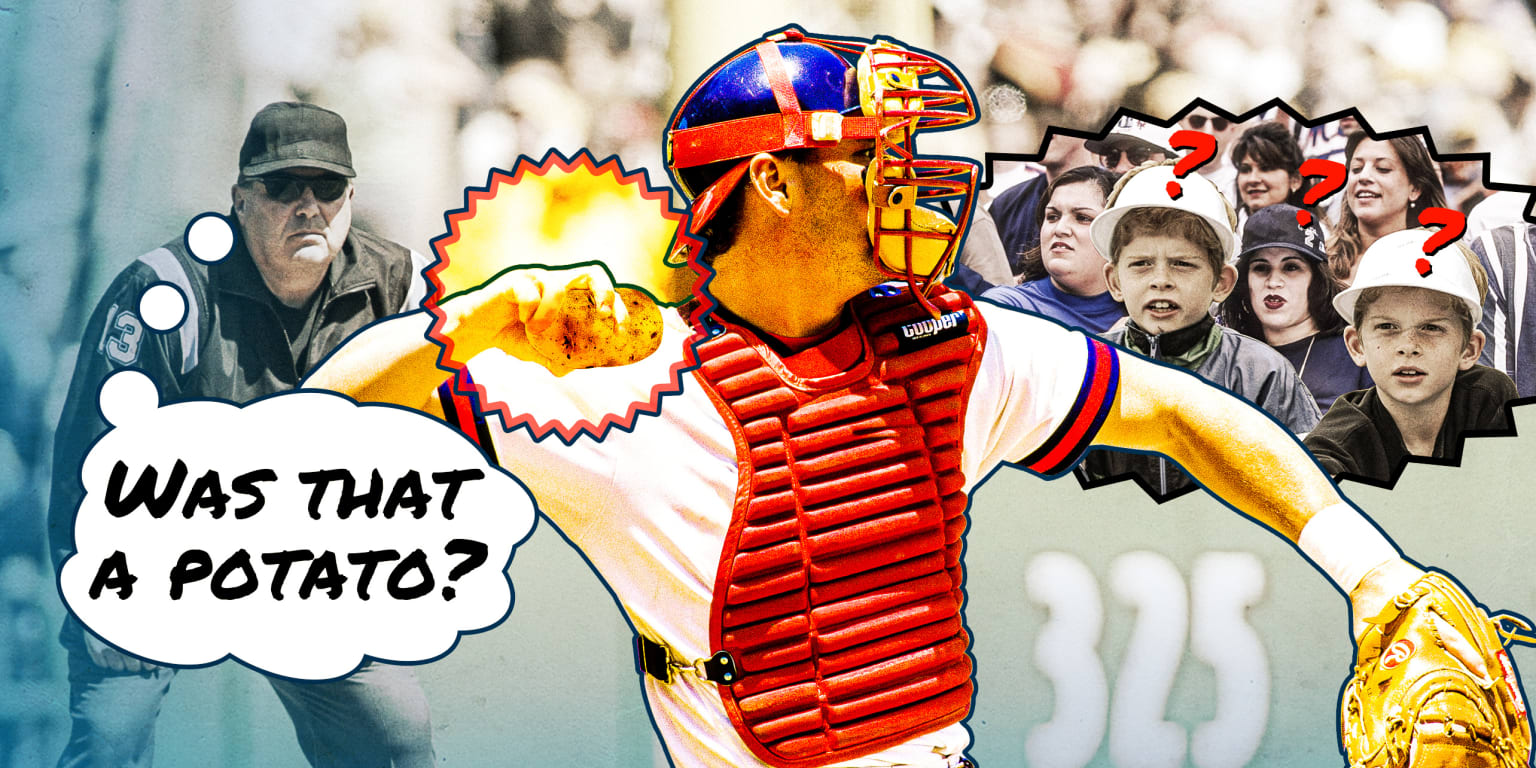 Dave Bresnahan, a veteran minor league catcher, didn’t say much about it during a phone conversation, but the man known as the “Potato Caper” is baseball royalty.

His great-uncle, Roger, was the first MLB catcher to wear shin guards. He also invented the first batting helmet after being hit in the head by a pitch. He later won the 1905 World Series with the Giants and was inducted into the Hall of Fame after a long career as a player and manager.

So in 1987, when Dave had to call his father, Roger’s nephew, to tell him he had been kicked off Cleveland’s Double-A team for trying to use a potato to pick off a running back, naturally he was terrified.

“He was a great father, phenomenal and very committed to my baseball career,” Bresnahan told me. “And me thinking, ‘Damn, now I don’t want him to hear that his son was let go for throwing a potato. He had that fear, that worry, because I had always wanted him to be proud of me. But I had to make the call, as nervous as he was.”

This is the story he told.

It was already late August in the midst of a long and difficult minor league season in 1987 for the Williamsport Bills and everyone, including

Bresnahan – a 25-year-old backup catcher – was trying to fill out the rest of the schedule. They were 28 games out of first place. There were long bus rides after defeats and more defeats. And, especially for Bresnahan, long hours in the bullpen bantering with his teammates. One day, before starting a series against the Reading Phillies, that boy who described himself as “someone different, original” had a very particular idea.

“I thought, ‘How about we get a potato in the game?’” Bresnahan recalled. “It was just talk, but then it came up again the next day and my teammates thought it would be funny. They said, ‘Well, why don’t you do it?’ And I said, ‘What are you talking about?’”

Bresnahan played very little, so finally getting a chance to see some action and then throwing a potato across the field seemed like a pretty risky move. One of his teammates reminded him that there was a doubleheader the following week against the Phillies and that he was definitely going to start one of the two behind the plate.

So the plan was in place: When a runner reached third base during the game against Reading, Bresnahan would grab the potato, throw it high over the third baseman’s head — as if he were trying to catch the runner — and then take it down. he would touch the real ball when he jogged toward home plate. Most of the team would have to know about the play, from the pitching coach (who he had told him a couple of days earlier over beers and had been stunned), the pitchers and most of the infielders.

“The day before, the guys were like, ‘Hey, tomorrow is Potato Day,’” Bresnahan said. “It was like that gave people a little life, you know, something to talk about. That was it”.

A person who had no idea about Potato Day? Bresnahan’s manager, Orlando Gomez, who had been demoted from Triple-A to manage the Bills midway through the season. The man was already unhappy about his personal situation and probably wasn’t going to be willing to be a part of such a thing.

“No, of course I couldn’t ask permission,” Bresnahan said.

Bresnahan also consulted with a friend, umpire Tim Tschida, to see what the reaction would be if he put a potato in the game. Tschida told him that if he were the head of the umpiring crew, he would probably return the runner to third and start the game from there. And he would probably expel Bresnahan too. The catcher could live with that. He didn’t want the runner to score thanks to his prank.

“It’s not that I’m one of those crazy purists,” Bresnahan assured me. “But he did respect the game.”

Potato Day finally arrived on August 31. Bresnahan, to his surprise, was placed as the starting catcher in the first game, instead of the second. The starter of that first game, Mike Poehl, was a pretty serious pitcher, but he said he would still be part of Bresnahan’s prank. With the whole plan already in motion, how could he back down now?

Bresnahan wanted to put the potato play into action when there was a runner on third and two out, so that when it all happened, his team could get off the field before the umpires could reverse their decision. The moment came in the fifth inning. With one out, a runner on second and a left-handed batter at the plate, Bresnahan began calling for slow, inside pitches in the hope that the slugger would ground out to the right that would allow the runner to advance.

“And that’s exactly what happened: He grounded out to second,” Bresnahan continued.

Until now, everything was going well. So even though he was somehow regretting such a crazy idea, Bresnahan knew there was no turning back now. He had to do it.

“I kept a really big pet in my bag that I always kept in the dugout during games,” Bresnahan explained. “I told the referee that my glove had broken and I needed to go get another one. And he told me, ‘sure, sure’… I went to the dugout and, of course, all my teammates knew what was going on and they almost made me explode with laughter”.

Bresnahan had prepared the potatoes as well as possible. He peeled and cut them to look like balls. He put some extra ones out in case one of his roommates damaged them and before the game, he practiced throwing them in front of his house with his roommates. After tossing the potato a couple of times, they knew the trick would work.

Bresnahan grabbed the new mascot and returned to his spot behind home plate. Everything was ready.

“Now I had to signal the pitcher,” Bresnahan told me. “Of course, he knew that the game was mounted. He had to make sure the batter didn’t make contact. I asked for a pitch outside. I had to give the signal with my hand, because the pet had the potato, and then I had to pass it to the right hand. I had to do it without anyone seeing, and then get it ready near my ankle while he threw the ball.”

The pitcher threw the ball into the dirt, something Bresnahan wasn’t expecting. He was able to catch it, but he always wondered what would have happened if the pitch went all the way to the backstop and the potato flew out of his glove as he ran after the ball. Fortunately, that was not what happened.

“My heart was beating like crazy. I can’t believe I’m doing this. But I promised to do it, thought Bresnahan said. “I took the ball and I was supposed to throw it wrong to third. Rob (Swain) is playing third, he knows what to do, but I have to make a good throw.”

The guy who was running was about six-foot-five, Bresnahan told me, so if he didn’t dive back to the bag, the potato could have hit him in the helmet or in the back. He ducked, though, and Swain reached out as if trying to catch the potato Bresnahan had dropped. The potato flew into the gardens, bursting into pieces once it hit the ground. Left fielder Miguel Román–who wasn’t too aware of the prank–was surprised by what he was seeing.

“The runner got up and the coach from third yelled at him, ‘Score!’” Bresnahan continued to tell me. “He was running quietly to the plate, but just before he scored, the ball was in my glove and I touched him. I showed the ball to the umpire and threw it to the mound.”

It was then, of course, that the confusion began.

“The third base umpire was from New York and had gone looking for the biggest piece. She came back and yelled, ‘She’s a potato!’” Bresnahan recounted between laughs.

The plate umpire was not very happy because that day, there was an umpire supervisor in the stadium. He had no idea what to sentence. Bresnahan’s teammates stood with their faces hidden in their gloves. Contrary to what Bresnahan’s umpire friend had said, the umpires got together and decreed the run counted and the inning was still alive. Bresnahan felt bad, because his prank had allowed a run on Poehl’s account. Gómez, the manager, came out to complain, but he was really baffled by what had happened. Eventually, he returned to the dugout shaking his head.

The Bills dominated the next batter, Gomez took Bresnahan out of the game, and despite trailing 2-0 in part because of the potato incident, the Bills went on to win the game.

After the doubleheader and with the end of the season approaching, Bresnahan thought the incident was behind him. But Gomez was still furious about the potato. He told the receiver about him and fined him $50, thinking that Bresnahan was trying to make him look bad for some reason. And then Jeff Scott, the director of Cleveland’s player development department, decided to set an example with the Bresnahan case and released him, even though there were only two games left in the season.

“I got a call from Scotty and he was fine, cool, I’ve known him since I was with the Mariners,” Bresnahan said. “He told me, ‘Orlando is really upset, he thinks you did this to make him look bad… Bres, I can’t have players throwing potatoes.'”

Bresnahan understood, but he still had one last joke to make. Instead of paying the $50, he took two sacks of chips to the clubhouse and left them on the manager’s desk, with a note that read: “Of course you don’t expect me to pay the $50 fine, but there are at least 50 here.” popes. This is for you”.

So yeah, that’s the ridiculous, unbelievable, and probably disappointing story Dave Bresnahan had to tell his father, the nephew of an early 20th-century baseball pioneer nicknamed “The Duke of Tralee.” A veteran baseball man exalted to the sacred temple of the game.

“He had one of the biggest laughs of his life,” Bresnahan said. “He thought he was super funny. And I thought, ‘Thank God.’”

Bresnahan did several television and radio interviews after the case — he came close to being a guest on David Letterman’s show — and then was in the real estate business the following year. He received offers to play professional baseball after 1987, but never accepted.

The potato play was Bresnahan’s last contribution to the game of baseball. What a way to say goodbye.

Instead of the ball, he threw a potato. In addition