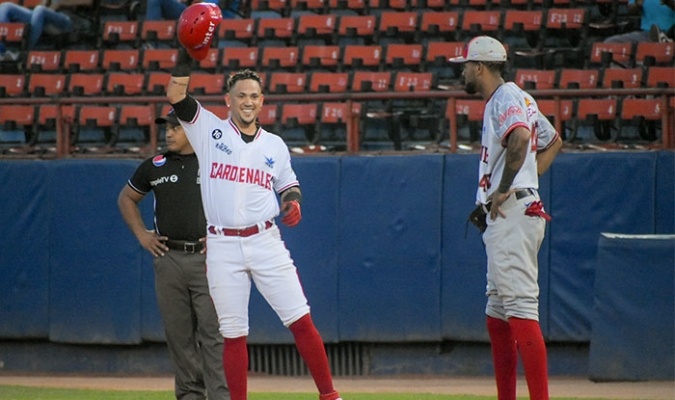 Armored, hot, annoying, left over, historical, there are different adjectives that we can use to define the great moment with the wood that Ildemaro Vargas lives.

On the night of this Friday, the second baseman of Cardenales de Lara, without wasting time, connects with a hit in his first turn of the match against Tiburones de La Guaira, connection dispatched against pitcher Jasier Herrera.

With that unstoppable, the native of Monagas leaves behind the chain of unstoppable in consecutive games that the immortal Víctor Davalillo completed at the time, in the same way, it allows him to reach another eternal of our ball, Teolindo Acosta, with 26, I feel this the brand for native hitters.

Likewise, Vargas remains 2 behind the absolute record for Venezuelan Professional Baseball held by American Adrian Garrett, who managed to sound unattainable for 28 games in a row during the 76-77 season at the service of Leones del Caracas.

However, during that first inning, the sharks stung forward when Lorenzo Cedrola opens with a double and scores on a selection move.

The Red Birds tied the actions in the second inning, with another connection that makes history, this time for newcomer Pedro Castellano as he thundered his 8th home run of the season, thus equaling the mark for the most home runs by a rookie, set in the 20212.2013 by Salvador Pérez, precisely with La Guaira.

Read also: See how the Venezuelan baseball position table is going: Caribs in search of classification

This is the first entry for the crepusculars, who see how the Sharks make 2 more in the fourth, José “Cafecito” Martínez steps on the plate on a selection play and Kelvin Meleán, with a hit, drives in Junior Sosa.

Honorable mention deserves the Guairista opener; Herrera covers the route for 5 innings of 6 hits, 1 line with 1 passport and 6 fans, he takes the victory to improve his record to 1-0 with a 1.08 ERA, this is his first award in the LVBP.

Loses Cardinals starter Nestor Molina, who also does well on the mound. 1 of the 3 runs that they score is deserved in work of 7.1 chapters of 8 hits, 1 walk and 6 strikeouts, he remains with a balance of 2-2 and an ERA of 5.40.

Junior Guerra achieves his first rescue despite allowing 1 run. His ERA stands at 5.26. It is his number 1 saved game since he debuted in the League in the 2008-2009 tournament.

Ildemaro Vargas continues to show all his power! ð ???? ¥

With this unstoppable, he reaches 26 consecutive games with HIT and equals Teolindo Acosta’s mark for a Creole in a season in the #LVBP.