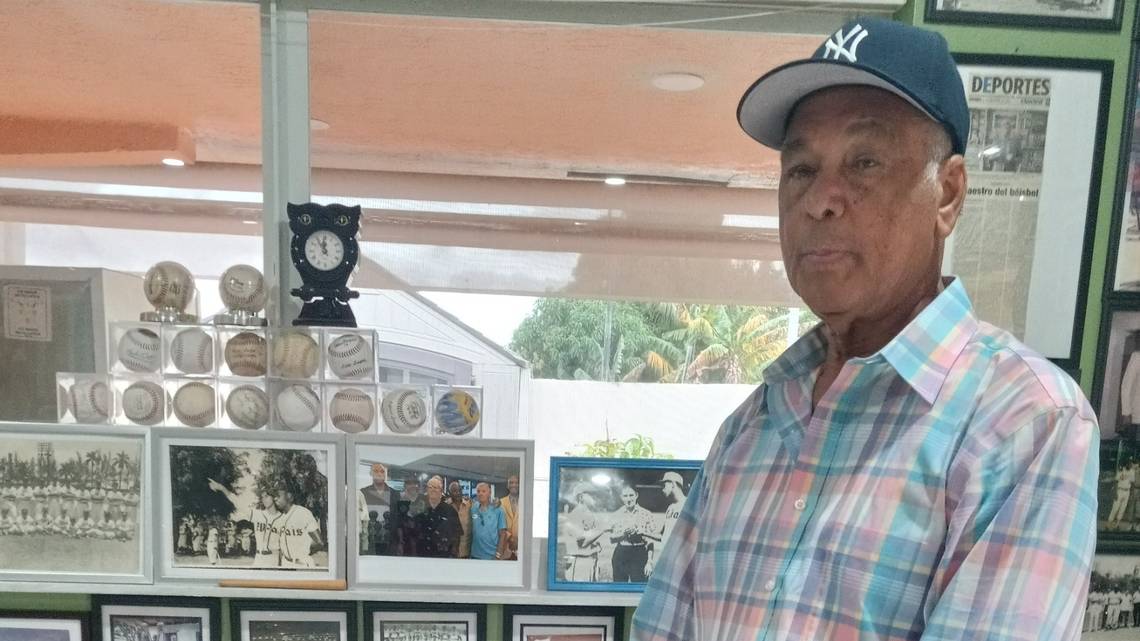 He was a teacher of the sport of balls and strikes and the main strategist of youth baseball in Havana during the fifties of the last century. Dozens of players passed through his expert hands who later became stars of the Major Leagues, professional tournaments in Latin America and the National Series.

Lázaro Ruiz is, without a doubt, a living legend of Antillean baseball whose name should be located in the place it deserves due to his history as a coach and talent scout; performances where he made a valuable contribution to Cuban and Latin American baseball and the Major Leagues.

Teaching and directing young people who want to succeed in sports is not an easy task. And sometimes even ungrateful, because those teachers who with a lot of love start the path for those future stars, on many occasions do not receive the recognition they deserve; even even of some of the disciples when they rise to the top of fame and glory.

But they, without thinking of receiving future thanks, are the ones who, with great sacrifice, are in charge of creating the necessary foundations for learning in one of the most important stages for the development of an athlete.

Good relations with your players. Sensitivity to any problem. Firmness of character in their decisions and enforce them without the need to use obscene language. Sacrifice. Huge knowledge of baseball. These were the virtues that in his long career adorned the one who was known as “Lázaro el de Mantilla”.

He was born on June 6, 1934 at the Calixto García Hospital in Havana. His mother was called Basilia and his father was José Dávila, a Spanish citizen who died when Lázaro was one year old. Due to this family tragedy, his mother, along with his sister Regina, taught him as a child to face the world without fear and with decency in the face of any challenge.

Among the Cuban-born players who learned under his guidance and later shone in the Major Leagues, names such as Dagoberto “Bert” Campaneris, José Cardenal, Zoilo “El Zorro” Versalles, Rigoberto “Tito” Fuentes, Marcelino López and José Arcia stand out. .

So did several Dominican players, including Alex Arias and Miguel Jiménez, as well as figures who acted professionally such as Andrés Ayón, René Frior, Lorenzo “Habichuela” Gómez, Iván Davis, who pitched in the Minor Leagues and with Almendares in the last Winter League championship to later become one of the best referees in the history of Cuban baseball.

Before being a strategist, Ruiz played in the Cuban capital as a starter for Key West. Encouraged by advice from the legendary catcher Julio Rojo (father), he began the path of teaching and directing, leaving behind the role of batting and fielding.

The first team under his command when he was 18 years old was El Peñalver. Later he did it with the Alerta newspapers where the sports chronicler Fausto Miranda wrote and El País where Manolo Braña did it. Later, he was selected as the mentor of the famous ninth Youth Mantilla that became a dynasty in that category.

In the 1950s in Cuba, youth tournaments were reported by the excellent written press in Havana, especially by the newspapers El Mundo, La Marina, Alerta, El Crisol and Revista Bohemia.

Lázaro won three consecutive championships with the Mantilla Juvenil, between 1957 and 1959. This streak was cut short in 1960 against Cabañas de Cojímar due to a masterful pitching by Manolito Hurtado, a pitcher who later shone with the Industriales and the Cuba team.

Ruiz was the driver of the youth national team to the first world championship in this category held in Mexico, in 1956. He also commanded the ninth for the Santo Domingo World Cup (1957) and in Venezuela (1960).

At the beginning of 1960, in a presentation of baseball players before Major League talent scouts held in the town of Güira de Melena, Lázaro, through the American baseball leader Alex Pompez (son of a Cuban born in Key West) was the one who made possible the signing of José Cardenal with the Giants and eight other youngsters that included two from that municipality, José Antonio Pedroso “Erito” and Julián Miró (15 years old).

After his name acquired national recognition, some professional baseball leaders saw in Ruiz a future manager of one of the four traditional teams of that Winter League, which was the second best tournament in the world since the beginning of the last century.

In the 1959/60 championship, Lázaro was assistant to the Tigres de Marianao, which was directed by Napoleón Reyes, also having José María Fernández and Juanito Izaguirre as coaches. This team included stars such as Orestes Miñoso, Julio Bécquer, René Frior, Mike Fornieles, Andrés Ayón, Zoilo Versalles, José Valdivielso and José Tartabull, as well as the North American pitcher Bob Locke (10-5, 2.55).

Before being an assistant with the Tigers, Ruiz had guided a semi-pro reserve ninth of the pros, winning the championship at Arroyo Arena.

In 1961, for opposing the new political system implemented in Cuba, Ruiz was separated as leader of the Antillean cast for the youth world championship in Havana where two pitchers of enormous quality were present: the left-hander Manuel “Amorós” Hernández and the right-hander Manolito Hurtado, as well as eight stars who performed with Lázaro in Mantilla, including Ángel “Jabao” Suárez, René “Macuto” Salazar” and Marcial Rodríguez.

The famous journalist Pedro Galiana, who had great influence with the Havana Lions, sought to bring Lázaro as a strategist for this team in the glorious Cuban League. But months later the professionalism was eliminated and the dream of managing the Reds was gone.

Ruiz managed to leave Cuba on a direct trip to Miami in 1963 at the request of Alex Pompez, a scout for the San Francisco Giants. Already settled in the United States, he continued as a talent scout for the Giants, a position he later also held with the San Diego Padres recommended by Pedro “Preston” Gómez (leader of this team) and with the California Angels.

He participated as a coach in the professional tournaments of Latin America with the ninth of La Guaira in Venezuela, and in Mexico with the Red Devils together with Preston Gómez when he replaced Lázaro Salazar (The Prince of Bethlehem) in the direction.

Lázaro founded in 1975 in Elizabeth, New Jersey, an Academy that bore the name of Basilia (his mother’s) and moved it to Miami in 1994 where he kept it until his retirement in 2010. Lázaro and his mother were always inseparable, and in the Estadio del Cerro all the fans knew her and loved her, in addition to the fact that she was a close friend of the immortal Martín Dihigo.

Ruiz also directed novenas where semi-professional baseball players participated in New York in the Hispanic Federation Athletic League Champions Carnival Tournament, organized by Cuban Tony LaRondo and sponsored by Miller beer. For his meritorious work in said city, he was elected to the Hall of Fame of said sports institution.

Talking with a figure who has spent almost 60 years as a baseball manager, his expert opinion on this sport in its different eras and its best players cannot be missed.

“In Cuba, professional baseball was played close to the level of the Major Leagues. We were one step away from having our own Major League team after the Cuban Sugar Kings (affiliated with Cincinnati) under the direction of Preston Gómez won the Triple A Championship in 1959 defeating Minneapolis Miller in seven games held at the Gran Estadio del Hill and in Minnesota. Amateurism was the best in the world. There were many stars who passed through our baseball, but the most complete player on the island was Martín Dihigo,” says Lázaro.

When we ask him about Cubans in baseball in the United States, he mentions a list of the most outstanding: “In the Negro Leagues, where we also had our own teams, we cannot fail to mention Cristóbal Torriente (Cooperstown), José Méndez (Cooperstown) , Martín Dihigo (Cooperstown), Alejandro Oms, Silvio García, Rodolfo Fernández, Luis Tiant (father), Lázaro Salazar, Claro Duany and Alejandro Crespo, to name only ten of them”.

And when mentioning those who have come from the National Series, he tells us: “Orlando “El Duque” Hernández, his brother Liván Hernández, Kendrys Morales and Rey Ordóñez. Among the active ones, a group of them have a star level and we have other very talented young people. But at the moment the most outstanding are José Abreu and Yulieski Gurriel who have proven to be superstars, while closers Aroldis Chapman and Raisel Iglesias shine in pitching”.

Regarding Luis Tiant and his chances of being elected to the Hall of Fame, Lázaro tells us: “When we see that Miñoso and Oliva were elected in January of this year after the vicissitudes that they went through for so long, I am hopeful that Tiant will be the next to be honored by the Veterans Committee. He deserves it ”.

About the differences of current baseball in relation to other times, he explains: “The style of play is different from other times. Strategies are not used so much to make it more hitting by counting the batters with the help of a “survivable” ball and with better physical preparation.

“Scientifically, much progress has been made, but this does not mean that all players are better than before. What happens is that the players of this era have better technical and economic conditions to develop their talents. A huge difference is the millions of dollars that today’s athletes earn, which in the end harms the quality of baseball, while the great stars of other times did not receive that salary and to receive a salary increase they had to do it for performance season after season. season”.

Lázaro Ruiz’s main legacy has been the training of hundreds of young baseball players; dozens of them later acted in the Major Leagues and in professional baseball in Latin America. His success in this role is an inseparable part of the history of Cuban baseball.

At 87 years of age, he lives in Miami. She has seven children (2 girls, 5 boys) and 12 grandchildren. Old friends and players who knew or had some sporting relationship with Ruiz who wish to communicate with him to greet him or recall the glorious past of Cuban baseball can do so by calling him at 305-772-1233.

He was manager, scout and paved the way for many to reach the Major Leagues. Who is this living legend of Cuban baseball?