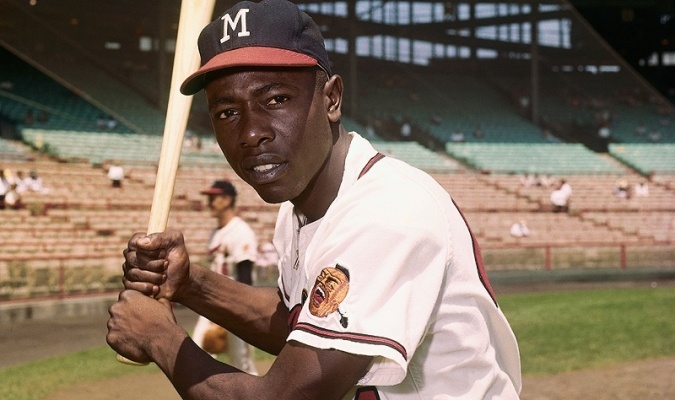 For ever and ever, February 5 is a date of joy in the Major Leagues, because on a date like today in 1934, Henry Louis Aaron was born in the town of Mobile, Alabama, Hank Aaron for more address.

Possessor of exceptional power and qualities to play ball, this slugger was known by nicknames as “El Martillo”, “El Martillo Hank” or “Henry el Malo”. His great physical strength made him perhaps the most powerful shoveler to ever set foot on Major League property.

His exploits are counted by heaps. During his 24 years in the major league (22 of them with the Braves franchise and 2 with the Brewers), he batted .300 or more on 14 occasions, while on 11 occasions he drove in at least 100 runs.

Although he never hit more than 50 full-round shots in a season, his home run consistency is a hallmark of his career, only in three tournaments did he hit less than 20 homers.

For more, he was part of 25 All-Star Games, won a couple of batting titles and won the World Series in 1957, when his Braves defeated the almighty New York Yankees.

So complete was his performance in the diamonds, that at the end of his career he was the leader for life in home runs with 755, a mark that lasted for 33 calendars until the controversial Barry Bonds managed to accumulate more.

To this we must add that Hank Aaron is still the historical number 1 in RBIs with 2,297 as well as in total bases with 6,856.

His career ended in 1976 and his inevitable arrival at the Temple of the Immortals took place in 1982 when he received 406 of the 415 possible votes.

There is so much that can and should be said about his legend that these lines completely fall short. Hank Aarron, the great slugger at the top level of the sport of bats, gloves and balls.