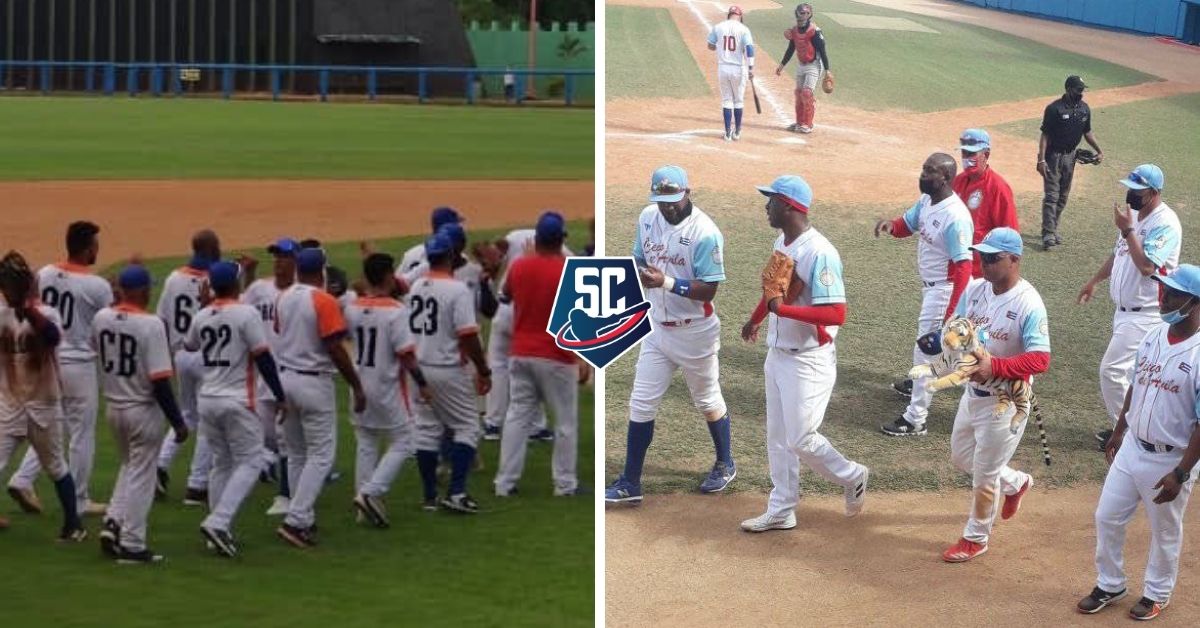 On the afternoon of this Sunday, February 6, the particular weekend commitments corresponding to the 61st edition of the National Baseball Series concluded.

The Roosters of Sancti Spíritus did not believe in the Blues of the Capital and swept them in their grounds of José Antonio Huelga with a home run with loaded bases that they decided early, while the Naranjas of Villa Clara hit back at the Indios de Guantánamo, to level the subseries.

For their part, the Toros de Camagüey knocked out the Vegueros de Pinar del Río at the Cándido González, deploying a strong offensive against the rival pitching, to pass the broom, the same performance that the Tigres de Ciego de Ávila signed against the Piratas de la Island in the Cepero, completing the sweep.

At the Gallos fence, the cast of Sancti Spíritus (4-5) completed the sweep against the Leones de Industriales (4-5), by beating them this Sunday 6×1with a good opening by the youngster Alex Guerra (1-1) to score the win.

Guerra worked 5.1 innings and only allowed a clean one to the Blues, driven by catcher Oscar Valdés (he left the game injured), who hit one of the five hits allowed by the yayabero starter, although he gave away six walks and struck out a rival batter .

However, Industriales’ offensive was unable to take advantage of the lack of control shown by Guerra at times and they were only able to accumulate six hits, including doubles by designated Lazaro Ponce and emerging Yoasán Guillén. In addition, the people of the capital made a mistake on defense.

It may interest you: MADNESS IN NEW YORK: The new Yoenis Céspedes has arrived (+VIDEO)

Meanwhile, the Gallos hit 12 hits in the game, three of them off the bat of right fielder Alberto Rodríguez (4-3, double, CA), although the big man on offense was left fielder Dismani Ortiz, who he went 2-4 with five RBIs and one scored. His grand slam in the opening inning sealed the game early.

It may interest you: STARS without a job: DE LOCOS Cuban free agency in 2023

This Tuesday, Industriales will begin their visit to the José Ramón Cepero in Ciego de Ávila to visit the Tigres (7-3), while the Gallos will receive the Piratas de las Isla (5-5) on their fence.

In an exciting ball game, the Tigres de Ciego de Ávila (7-3) established themselves in third place in the championship after leaving the Piratas de la Isla (5-5) on the field at the Cepero, with final score of 9×8.

The pineros opened the scoreboard with a run in the top of the second and added another two in the third, before offers from the Tigers’ starter, right-hander Dachel Duquesne (5.0 EL, 6 H, 3 C, 3 CL, 3 K , 4BB). But in the bottom of the third, the Avilanians discounted one and scored a rally of seven an episode later, expelling Pirates pitcher Alberto Hechevarría (3.2 EL, 7 H, 5 CL, 1 K, 3 BB) from the box.

With the game 8×3 in their favor, the victory of the Tigers seemed a matter of time, but after the departure of Duquesne, the Pineros fell on the relief pitching of the locals and scored three in the seventh and two in the ninth. , to match the 8×8 clash when it comes to picking up the bats.

However, a walk to Rubén Valdés with a full house in the bottom of the ninth, by pitcher Franklin Quintana, gave the victory to the Avilanians and the pineros were left lying on the Cepero grass.

Both teams had 13 hits in the game, but no homers. The Tigers made three errors to one the Pirates. In addition, seven of the nine regulars from Ciego de Ávila hit hits in the clash and six of them added two, especially Yorbis Borroto (5-2, 2 CI, CA) who drove in a couple of runs. For the pineros, the most outstanding were Eliseo Rojas who went perfect 4-4 with three doubles and two runs scored and José Luis Brings, who batted 3-4, with double and triple, in addition to four charters in a losing effort.

Now the Tigres will host the Leones de Industriales (4-5) at the Cepero from Tuesday until next Thursday, while the Piratas will move to the José Antonio Huelga to face the Gallos de Sancti Spíritus (4-5).

Without a doubt, the Toros de Camagüey (3-7) came in handy to celebrate this weekend series at their Cándido González properties, as they deployed a strong offensive in both games, to sweep the Vegueros from Pinar del Rio (5-5), with Sunday success of 11 × 1, KO in eight chapters.

A whopping 17 hits connected the winners, including four doubles and three homers, with an error to the defense, while the green-legs added only four hits (a double and a home run) with a couple of fumbles.

In the case of the losers, Yaser Julio González homered in three at-bats, while Yanciel Ajete hit a double as a pinch hitter.

The Bulls’ right-hander, youngster Juan Sebastián Contreras (1-1), made a quality start to earn his first win of the season, working 7.0 innings with only four hits allowed, one earned run, dishing out four strikeouts and awarding three tickets. The reliever Lisander Hernández threw the eighth without setbacks, with a strikeout included.

The defeat went to the account of the starter of the Vegueros, Yasiel Zambrana (0-2), who did not do badly either, because in 4.1 innings of work, they hit five hits, scored four runs, two of them clean, without strikeouts and with a ticket. However, relievers Jorge Andrés Montano, Reilandy González and Branlis Rodríguez endured punishment of 12 hits and seven earned in 3.1 innings pitched.

In this way, the Toros de Camagüey achieved their first sweep of Series 61 and although they still remain in the bottom of the table, there is a noticeable recovery in the squad ahead of their mid-week commitment, as locals, against the Cazadores de Artemisa (4-5), while Pinar del Río will try to return to the path of victory against the Leñadores de Las Tunas (4-6) at the Julio Antonio Mella.

Finally, at the Van Troi stadium in Guantánamo, the visiting Azucareros de Villa Clara (5-4) recovered from the setback suffered on Saturday and hit back at the Indios del Guaso (3-7). with 15×6 beating.

During the first third of the game, there were only zeros on the board, as the starters of both teams maintained ample control over the rival batters. However, in the upper part of the fourth, the oranges went over the Guantanamo pitcher Pablo Aníbal Salgado (1-2, 3.2 EL, 5 H, 7C,1 CL, 4K, 4BB), loser of the match, until scoring a great an eight-run rally that guaranteed him victory, combining four hits, a walk, two pitches and an error, while Yurién Vizcaíno (5-2, HR, 4 CI, 3 AC) hit a three-run homer.

It may interest you: “More baseball and less soccer on Cuban TV”, requested Cuban baseball figure

In the opening of the eighth, Villa Clara added another three runs to his score, all driven by homers by veteran third baseman Yeniet Pérez (4-1, HR, 3 CI, 2 CA), while in the ninth, a home run by substitute Reidel Pedraza with two on board he powered another three for the winners.

The 1-2 line up, Magdiel Gómez and Otoniel González, added a couple of hits in the match, one RBI per capita, while Juan Carlos López (3-1) brought a couple of teammates to the register.

From the box, the young Elier Carrillo (2-0) walked quite solidly and got the credit, allowing seven hits and three earned runs in 6.0 innings of work, with four strikeouts and three walks, enduring a two-run homer of the bat of Over Cremet (5-2, 2 HR, 3 CI, 2CA), the most outstanding of the Indians’ offense, as he added another homer in the eighth, against reliever Raidel Alfonso.

Now Villa Clara will travel to the Guillermón Moncada stadium in Santiago de Cuba to face the Wasps (7-2) from Tuesday to Thursday, while the Indios del Guaso will host the Elefantes de Cienfuegos (4-5) at their headquarters in Van Troi.

In other results of the Sunday session, the Alazanes de Granma (5-5) beat the Cocodrilos de Matanzas (6-3) 7×3, the Cazadores de Artemisa (4-5) beat the Leñadores de Las Tunas (4-6) 2×1, while that the Hurricanes of Mayabeque (7-2) whitewashed the Cubs of Holguín (3-7) 6×0 and momentarily tied for the top of Series 61 with the Wasps of Santiago de Cuba (7-2), whose Sunday game against the Elefantes de Cienfuegos (4-5) was suspended due to rain and will be played this Monday, starting at 10 in the morning, at the Guillermón Moncada stadium.