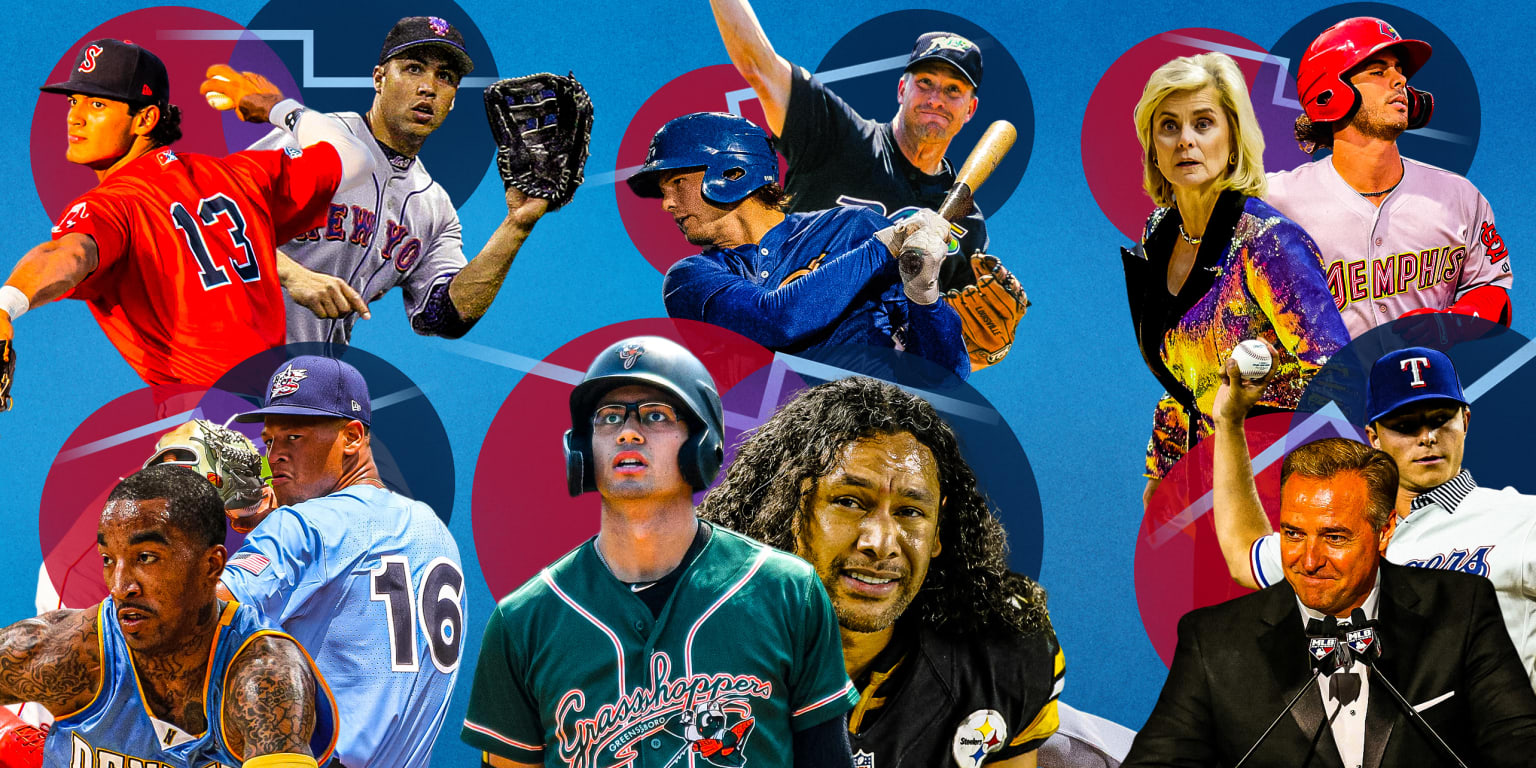 We already know well what the current pairs of parents and children are. The Dominican Fernando Tatis Jr., Ke’Bryan Hayes, Cody Bellinger. Wow, only the Blue Jays have three with Vladimir Guerrero Jr., Bo Bichette and Cavan Biggio. It is a sign of how multi-generational this sport can become.

But if we expand a bit, we can see that the trend is not just from parents to children. When we include the minor leagues, there are a lot of prospects with celebrity heritage.

Here’s one from each team that has an important family or ancestry:

When Carter committed to the University of Miami in 2017, he immediately received a tweet from his famous cousin saying “we need you at the Yankees.” This is JR Smith, who retired in 2020 after playing 16 years and winning two NBA championships. Although he’s not in New York, at least he’s with an AL East franchise.

American football was the main thing in his family. His father, Andre, played in the NFL, while his brothers, TJ and Malachi, also played the sport professionally. However, Jahmai went down the baseball path and made it to the majors in 2020 with the Angels. He ended up in Baltimore in the Alex Cobb trade.

When the Rays took Lowe 13th overall in the 2016 amateur draft, they also selected his brother, Nathaniel, 12 rounds later. The two are different players. Nathaniel is a traditional slugger and first baseman, while Josh is more of a sprinter and center fielder. The oldest Lowe was the first to reach the majors, doing so in April 2019, before being traded to the Rangers in December 2020.

Not only is he the nephew of nine-time All-Star and potential Hall of Famer Carlos Beltrán, but the Puerto Rican trained at his uncle’s academy in Puerto Rico before the Red Sox selected him in the 2019. Hit .270/.338/.364 with four home runs and 15 stolen bases in 105 games in Lower Class-A, during his first full season as a pro.

Just like his brother, Tristan; a right-hander on the Giants’ farms, Beck was first in the rotation at Stanford University before turning pro. He has the four-pitch command that has drawn comparisons to Shane Bieber.

The only pair of Canadian brothers to be selected in the first round of the Amateur Draft. Josh (selected 12th by the Marlins in 2015) and Bo (29th in 2018) were reunited in the Cleveland organization when the Guardians acquired Josh in the Mike Clevinger trade with the Padres in 2020.

Let’s be honest, this name probably came to mind when you saw what this note was about. As one of the best prospects in baseball, Witt should be the next to carry the Juniors’ torch. His father, by the same name, pitched for 16 years in the majors, 11 of which were with the Rangers, and won a World Series with the D-backs in 2001.

Roger Clemens gave all of his sons a name that includes the letter “K,” referring to their strikeouts. Koby and Kacy had a stint in the minors – they ended up playing independent baseball in 2021 – but it seems Kody has the best chance of following in his father’s footsteps and seeing action in the Major Leagues, after hitting .247/.312/ .466 with 18 home runs in 97 games at Triple-A Toledo.

The Cuban was the most famous player in the 2020-2021 international class, thanks in part to being Yoenis’ brother; who was called to two All-Star Games and won two Home Run Festivals. He signed for $2.05 million last January and showcased his talents by hitting .285/.350/.463 with eight home runs and 18 steals in 72 games between Class-A Strong and Double-A.

In 1990, his father, Steve, was selected in the amateur draft by the Mets, and three years later he was taken again, this time by the Giants. Tyler has more projection than his father, who came to the majors as a right-handed pitcher in 1996.

Tim Criswell was a minor league pitcher and catcher with the Dodgers (pitch) and Braves (catcher) through five minor league seasons. His son Cooper was selected in the Amateur Draft by the Angels in 2018 and made his Major League debut in 2021.

Kessinger’s grandfather, Don, was called up to six All-Star Games with the Cubs, whom he also managed in the majors. His uncle, Keith, briefly played for the Reds in 1993. Kessinger hit .209/.287/.330 with nine home runs and 12 stolen bases in 86 Double-A games.

The fact that Polcovich is a utility player should surprise no one, given that his father, Kevin, played 19 years of professional ball, including parts of two seasons with the Pirates in the majors. Kaden reached Double-A in his first year as a pro and defended four positions in the process.

Al Leiter won 162 games during a 19-year career in the Majors, in which he won a pair of World Series rings and was named to two All-Star teams. His son, Jack, is an even better prospect than he was at that age. Jack was the second pick in the 2021 Amateur Draft, thanks to an elite fastball and three solid secondary pitches.

Kingham was a decent prospect, who wound up being selected by the Braves in the 2018 Amateur Draft before reaching Triple-A in 2021. It’s a different path than his brother, Nick, who was taken by the Pirates. in 2010 and pitched briefly with Pittsburgh and Toronto.

Jeff Conine is known as “Mr. Marlin,” after winning two World Series and being called up to two All-Star Games with the team, which acquired his son in the 2020 trade for Jonathan Villar from the Blue Jays. Griffin ranked second in the minors with 36 home runs last year, along with batting .218/.330/.530 ​​between Class-A Strong and Double-A.

The Mets infielder prospect is the nephew of Hall of Famer Vladimir Guerrero, thus a cousin of the Blue Jays’ Vladimir Guerrero Jr. After being signed as the 21st-best international prospect, the 23-year-old Dominican hasn’t been able to get past the Florida Complex League, where he hit .220/.284/.370 in 35 games last year.

Baker is remembered from the 2002 World Series, when he was just 3 years old and JT Snow charged him to avoid a collision at the plate. Twenty years later, the son of Astros manager Dusty Baker is about to start his first full season as a pro, having been selected in last year’s Amateur Draft.

This Ashby is left-handed. His uncle, Andy, was straight. Other than that, the two of you share several similarities. Both made their major league debuts at age 23 and both pitched primarily (for now) for NL teams. Andy had a 14-year career with the Padres, Phillies, Rockies and Braves.

“She’s close to being on a major league team, and if she doesn’t, trade her, Magic,” legendary women’s basketball coach Kim Mulkey said as part of her Hall of Fame induction speech last month. last May, referring to his son and calling on Magic Johnson, part of the Dodgers’ owners, to obtain it. The 27-year-old infielder hit .253/.366/.414 with 11 home runs and 11 steals in 118 games at Triple-A Memphis in 2021.

The son of renowned baseball agent Jay and nephew of former all-star pitcher Ryan, Kohl has been developing into one of Chicago’s top pitching prospects, missing the 2021 season with oblique and shoulder injuries.

Sabol is coming off a solid first season as a pro, posting a .957 OPS in 66 games, mostly in Class-A Low. If the mask makes it to Pittsburgh, he could get a big welcome, considering his cousin is Steelers football Hall of Famer Troy Polamalu.

Siani was selected by the Reds in the first round of the 2018 Amateur Draft. A year later, his younger brother, Sammy, was drafted by the Pirates. Both have a long way to go, but they could end up forming a nice rivalry in the Central of the LN

Thomas grew up in the world of baseball, the son of Allen Thomas, the White Sox’s former director of strength and conditioning, who was released this year after being with the franchise since 1996.

Son of Lazaro Vargas; A designated hitter for Cuba in the 1992 and 1996 Olympics, Miguel has continued to produce at the plate after signing with the club in 2017. Last year, he won the Double-A Central batting title, hitting . 321.

The Bednar brothers will always remember 2021, after David posted a 2.23 ERA in his first full season in the Majors with the Pirates and Will won the national title and was named College World Series MVP with Mississippi State, before to be selected by the Giants in the Amateur Draft.

Basketball runs through his blood. Her sister, Sidney, is the captain of her basketball team at Northwestern and her father, Kenny, holds the scoring record with 2,613 with East Hampton.

His father, James, has been in baseball his entire life. He was a coach at Oklahoma State and was a coach at Texas. He also coached in the minors and has been a scout with the Rangers and most recently with the Marlins.