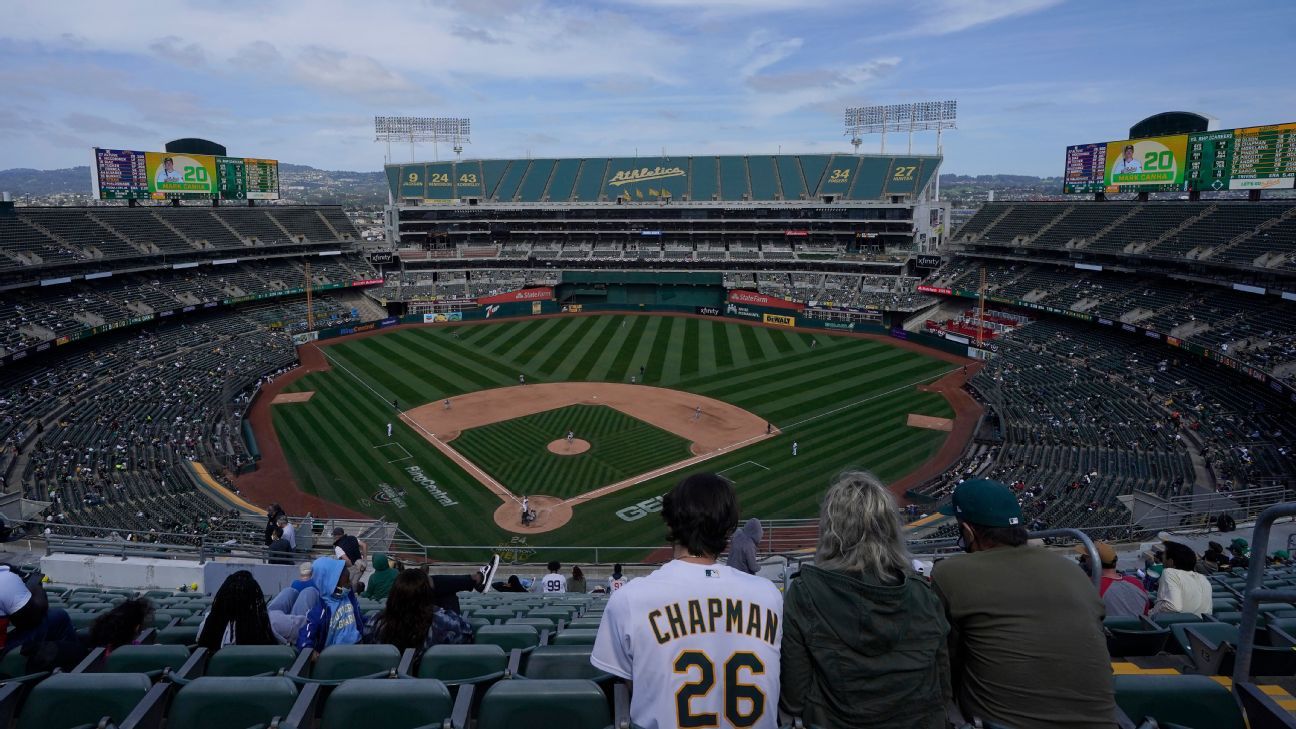 Eight members of the Oakland City Council will cast non-binding votes on a proposed $ 12 billion stadium and development plan Tuesday morning. An affirmative vote will simply keep the ambitious project alive, but a dissenting vote, the Oakland Athletics say, will jump-start the team’s relocation efforts.

“Our future in Oakland is at stake,” Kaval said in an interview with ESPN Monday afternoon, “and we’re doing everything we can to get a ‘yes’ vote tomorrow to our plan and keep the Athletics rooted in Oakland. But we don’t know if we will get a positive vote. There are still many areas where we significantly separate from the city, and we go to the vote without knowing how it will unfold. “

A two-decade process to secure a new stadium in the Bay Area has reached what Major League Baseball Commissioner Rob Manfred called “the end” before last week’s All-Star Game. There have been unsuccessful proposals in San Jose, Fremont, and various sites in Oakland, especially around Laney College. Renovations to the current Coliseum site, where the Athletics have played since 1968, have been deemed unfeasible in large part due to the team’s stated desire for a downtown location.

All that is seemingly left to keep the Athletics from leaving Oakland, and following the recent paths of the NBA’s Golden State Warriors and the NFL’s Las Vegas Raiders, is a proposed 35,000-seat oceanfront ballpark. from the Howard Terminal site at the Port of Oakland.

The Athletics made public proposals in April stating that they would privately finance the stadium, which will cost approximately $ 1 billion, while also providing $ 450 million in community benefits and organizing an additional $ 11 billion in private investment to eventually build the surrounding neighborhood. But the city of Oakland made a counterproposal on Friday that Kaval said “lacks details and doesn’t really answer any of the questions that we have that need to be addressed to move forward.”

The biggest problem stems from the $ 855 million that the Athletics have asked the city to pay for infrastructure improvements using taxes generated by the project. The A’s proposed two infrastructure funding districts to cover that cost, but the city rejected the proposal to create an additional district in nearby Jack London Square, leaving what Kaval estimated as a $ 352 million shortage that the A’s would have to. cover.

“That’s an extraordinary sum of money,” said Kaval, who has led the Athletics’ efforts at the stadium since joining the team in November 2016. “And not having something specific is a key concern. There is also concern about the additional taxes they are imposing on the project: condo transfer tax, a transportation tax that obviously increases the cost as well. Those are all items that are problematic. We can’t solve all of Oakland’s problems, but we can do a lot to to make this a better community and keep Athletics here for many generations. And that is why we are seeking an affirmative vote on our plan. “

The A’s need at least five council members to approve their plan, or four council members plus Oakland Mayor Libby Schaaf. Kaval said there have been “continuous negotiations” over the weekend and into Monday, but that the two sides “remain significantly separate.”

The mayor’s office declined to comment when contacted by ESPN on Monday. Justin Berton, spokesman for Mayor Schaaf, released a statement saying, “The City and the Athletics continue their dialogue today with the shared goal of bringing a world-class ballpark to life. The City will continue to advocate for a proposal that supports and serves the Oakland, and our entire region, offers affordable housing, public parks, great jobs, and other direct community benefits, all without risk to our port, our taxpayers, or city or county general funds. “

The Athletics’ lease on what is now called the RingCentral Coliseum expires after the 2024 season. If finally approved, the Howard Terminal stadium would not be ready until 2027, leaving the Athletics with a two-year gap. to cover in Oakland.

Meanwhile, team officials have continued to explore Las Vegas and its surrounding areas as an alternative. Kaval and Athletics owner John Fisher have made three trips to southern Nevada this year and plan to return there Wednesday. Manfred said last week that it would be “a mistake” to refer to the Las Vegas option as a bluff, calling it “a viable alternative for a major league club.” A “no” vote on Tuesday (City Council members will meet at 9 am PT) could trigger conversations with other potential relocation sites such as Portland, Nashville, Vancouver and Montreal, among others.

Kaval is unclear on whether the city will ultimately vote on the Athletics plan, which was presented to Oakland officials in early 2021, or the city’s counteroffer on Friday, adding a “yes” vote to the latter. it would be “similar to a ‘no’ vote” because the team does not approve.

“In many ways, we are in our last at-bat in Oakland,” Kaval said. “But if we get a win tomorrow and a deal that we agree to, we can send it to additional entries and hopefully get the final win in the fall.”