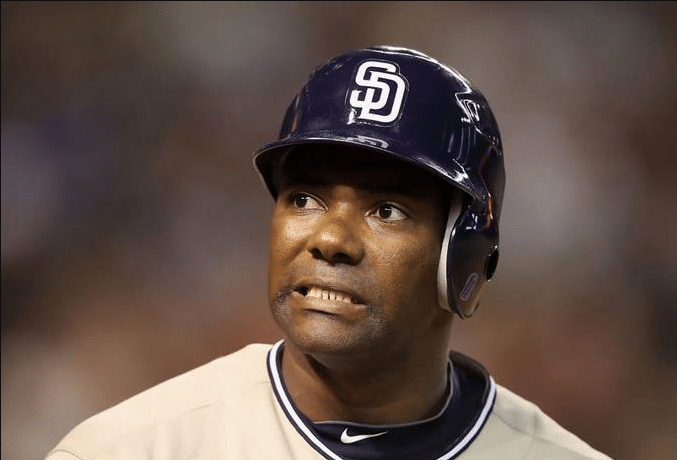 In the case of Miguel Tejada:

On December 18 of the 2021 course, the newspaper TODAY, made the publication about an arrest warrant against the former player of Big leagues.

The Penal Execution Court of the Judicial Department of the National District issued an arrest warrant and driving force against ex-pelotero Miguel Tejada, accused of issuing bad checks.

The newspaper TODAY quotes about Tejada that:

Judge Ana Lee Florimón, adopted the decision against Miguel Tejada, after finding him guilty of violation of article 66, of law 28-59 on checks, after issuing payments through this document without financial support, to the detriment of Mr. Henry Rafael Soto Lara.

The lawyers Rafael Rivas Solano and José Chía Sánchez, legal representatives of Soto Lara, explained that, in July 2019, the Fourth Criminal Chamber of the First Instance Court of the National District issued the sentence against Miguel Tejada 042-2019-SSEN-00109, sentencing him to six months in prison at the Najayo-Hombres Model Prison, for violation of the check law.

Faced with this situation, the headgear asked the court for the execution of the sentence imposed by the Fourth Criminal Chamber of the National District Court of First Instance, because the defendant must comply with the measure in prison and is at liberty, in contempt of the law. failure.

With this decision, Judge Lee Florimón ratifies the decision on the sentence against Miguel Tejeda, issued by the Fourth Criminal Chamber of the National District Court of First Instance, in July 2019.

It also ordered that once the arrest and driving order against Tejada has been complied with, it be brought before the National District Penal Execution Judge, for the corresponding legal purposes.

In the case of Sammy Sosa:

The once star of the Major Leagues, is mentioned 95 times in a corruption file against the Dominican state in the aforementioned “Anti Octopus” operation, where the main accused is Alexis Medina, brother of the former Dominican president, Danilo Medina. Despite this, the former player of MLB It does not seem like an investigated in the investigation by the Attorney General of the Republic.

According to the RC Noticias website, Sammy Sosa is indicated in the Anti Octopus operation file, as:

Former player Samuel Peralta Sosa, (Sammy Sosa) was interested in being part of the business of supplying Asphalt Cement (AC30), so he brought the ship Iver Agile with 29 thousand barrels from the port of Gilbratar, Spain to the Dominican Republic, this According to what the Public Ministry assures, in the accusatory file of the Pulpo case.

The aforementioned document maintains that Sosa goes to Juan Alexis Medina Sánchez because the boat had problems getting a port and this, using his influences, manages to get the former director of the Dominican Port Authority (Apordom), Víctor Gómez Casanova, to help him obtain a maritime terminal.

On the twenty-eight (28) of the month of November of the year two thousand and sixteen (2016), the APORDOM, legally represented Gómez Casanova signed with Overseas Petroleum Group, SRL, duly represented by its General Manager the defendant Julián Esteban Suriel, a lease agreement that It implied that APORDOM granted by way of lease in favor of Overseas Petroleum Group, SRL, a warehouse of two hundred eighty-three point twenty square meters (283.20 m2) and an area of ​​eight thousand two hundred twelve point fifty-seven square meters (8,212.57 m2) , of yard lands adjacent to the warehouse, located in the port of Andrés Boca Chica; In order to use the leased property as a storage area and collection center for loose cargo and solid and liquid bulk, through the construction, installation and use of tanks, in import, export, transit and cabotage movements, to be commercialized.

With the ship in port, Sosa goes back to Alexis Medina to arrange an appointment with the then Minister of Public Works, Gonzalo Castillo in order to obtain a contract that allows him to sell Asphalt Cement (A30) to the Government.

The entity explains that (Public Ministry): “The original intention of Samuel Peralta Sosa was to acquire the contracts through the company Overseas Petroleum Group, which is evidenced by the contract made with the Dominican Port Authority, but it was not possible materialize by not having the authorization to be a supplier of the State, that is why, for the purposes of selling to the State AC-30, they associated with the defendant General Supply Corporation SRL, where the defendant Julián Esteban Suriel appears as “partners” Suazo and Messin Elías Márquez Sarraff, acting as loan names for Alexis Medina ”.

From Sosa to Tejada: the latest scandals of Dominican players